Colombia’s Ciudad Perdida, carved into the stones of the Sierra Nevada mountains, is a breath-taking treasure that was once home to a thriving civilization. Explore the history and architecture of this unique historical site and see what the Global Heritage Fund is doing to protect this amazing piece of Colombia’s cultural heritage. 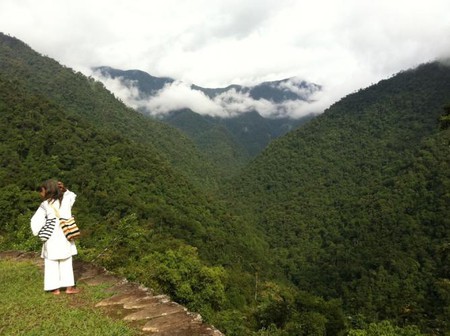 Courtesy of the Global Heritage Fund

For the adventurous traveler, it would take six days to trek to this ‘lost city’ and back. Ciudad Perdida (The Lost City) stands at 1,200 meters above sea level. This is not a place for the faint-hearted. The trek is 52 kilometers in total, and comprises 1,400 steps, eight river bed crossings, swimming ponds tucked amid the twists and turns, and encounters with nature.

But a closer look at the grandeur of this place clearly suggests that those who built Ciudad Perdida had to endure much more than six days. Along the trail of this mystic, dense jungle are remnants of civilization that once thrived here 1,500 years ago. Known by its indigenous name as Teyuna (Tayrona), Ciudad Perdida is nestled in the world’s highest coastal mountain range. Over 200 terraces were meticulously carved into the Sierra Nevada’s mountainside, tiled roads set stone by stone in a systematic manner, flattening rock to circular plazas for social gatherings. 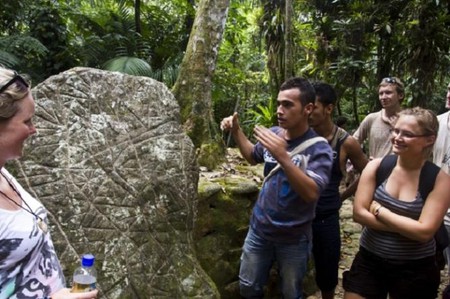 Travellers now have the opportunity to rediscover the treasures of the Teyuna people, their culture and the history of the site. There are no ticket booths, no tourist buses and no WiFi to make you feel like you’re connected to the modern world. The six-day trek connects visitors with the indigenous population who still inhabit the Sierra Nevada. Large engraved stones found along the trek are thought to be the regional map of the old Teyuna city, and although they are void of any written language, the series of stars and intersecting lines carefully orchestrated on stone suggest the existence of a civilization with its own system of communication.

One of the terraces, 10,000 square feet in size, boasts multiple round structures and is connected to adjacent terraces via paved walkways or staircases. You’ll find almost no walls separating the plazas and terraces, hinting that movement throughout the ancient city was probably unrestricted with multiple paths to access different areas. Any space or pathway that was off-limits according to socio-cultural norms was probably instinctively known to the inhabitants. 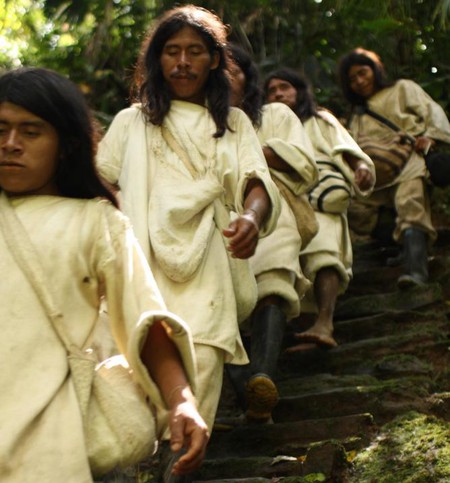 Kogi On Stairs | Courtesy of the Global Heritage Fund

This way of traveling is still preserved today along the ruins of the old city. Movement along the trail to Ciudad Perdida runs parallel to daily life here; the homes of the Kogi people resemble the huts of their ancestors and are constructed in discreet corners of the forest so as to allow a sense of privacy for the families and respect their daily livelihoods. Still, encounters are very common; indigenous men don white hats to symbolize the snowfields of the surrounding sacred peaks, and young children dressed in white clothing along the trek route observe travelers with inquisitive eyes. To the local inhabitants, the Sierra Nevada is the heart of the world and they believe that the future of the world lies in the sustained ecological and spiritual balance of their home and environment. 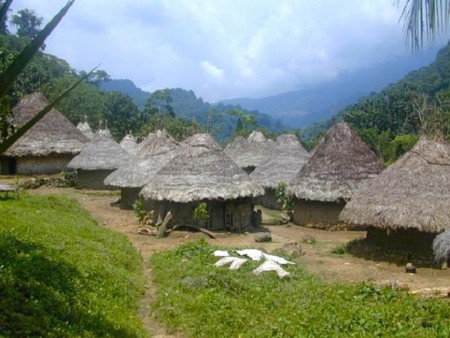 Ciudad Perdida’s highest point is a secret worth keeping, clear of jungle and breathtakingly beautiful. The carved platforms are majestic and an architectural masterpiece from every angle. The stone walls and trimmed grass lawns set the stage for splendid views of the Sierra Nevada and barely a chirp or a sound is heard to disrupt the tranquility. It feels as if you’re among the clouds, sometimes surpassing them. 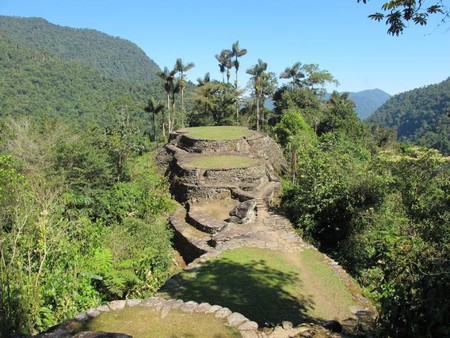 Courtesy of the Global Heritage Fund

The Global Heritage Fund (GHF) started its work Ciudad Perdida in 2009. Together with the Colombian Institute of Anthropology and History (ICANH), the Colombian Ministry of Culture and Organization Gonawindua Tayrona (OGT), which represents the indigenous populations of the Sierra Nevada, Santiago is leading a multi-year project in the upper Buritaca River Basin that focuses on the conservation of sites from the Tayrona civilization.

Founded in 2002, the Palo Alto-based NGO invests in cultural heritage to protect some of the world’s most endangered sites. Since the true stakeholders of a site are the local community, the only route to ensuring the sustainability of treasures like Ciudad Perdida is to factor in and invest in people. As a driver for development, investing in the cultural heritage of Ciudad Perdida also opens a dialogue for GHF to work with the indigenous Kogi and surrounding localities to improve local livelihoods, strengthen the community and lend expertise in long-term preservation of the site. 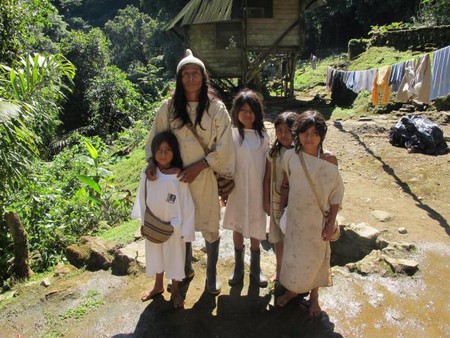 The Tayrona Conservation Project has generated significant improvements in community development and visitor access in recent years, including trail signage, wilderness first aid training for all guides, rescue equipment at key lodges, setting up water treatment systems, and a new health post at the indigenous village of Mutanzhi. In addition, a 90-foot-long suspension bridge was built at one of the river crossings to increase security for both inhabitants and visitors. Together with the local communities, GHF has been able to manifest an outreach program that places community development at the fore. 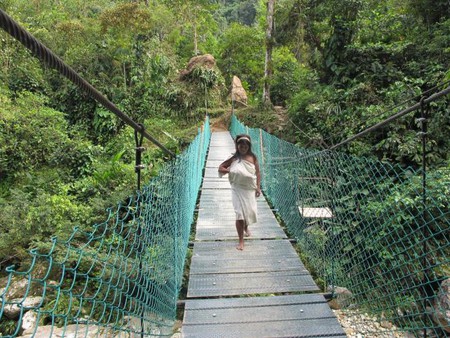 Still, what trekkers experience today is probably just the tip of the iceberg. To date, less than 10 percent of Ciudad Perdida has been excavated and there is still much to discover. When Ciudad Perdida was lost and unknown, looters took advantage of the silence, and the archaeological park was vulnerable to aggressive digging that has punctured the historic terrain. In an effort to save and protect some of these afflicted areas, GHF and ICANH plan to expand their mapping and survey efforts and will include the site of Tigres, where some 60 structures have already been identified.

Treks to the Lost City may be planned all year round with steady temperatures. The rainy season is May to October while the driest period is December to March. Independent treks are strictly forbidden. Access to the trek requires travellers to join an organised tour with one of the official agencies, usually in groups of 15. That said, on any given day usually no more than 4-5 groups are trekking to Ciudad Perdida at different trail stages, which makes for a memorable ‘alone in the Lost City’ feeling that’s hard to come by in a world on-the-go today.

There are a couple of good restaurants in Santa Marta, but for new takes on Colombian cuisine, one of the best is Tierra Negra Restaurant.

In the vicinity of the Ciudad Perdida Trail are authentic lodges that, while off the beaten path, offer various outdoor activities for every adventurer and accommodating to every pocket. The Barlovento Lodge at the Tayrona National Park is a great spot for surfers, while the modest Tiki Hut Hostel in Palomino has an on-site surfing school. 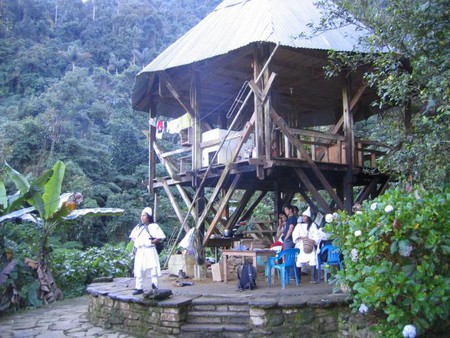 Global Heritage Fund (GHF) is an international conservancy whose mission is to protect, preserve and sustain the most significant and endangered cultural heritage sites in the developing world. GHF’s approach focuses on a four-pillar strategy, Preservation by Design®, a methodology that combines conservation science, planning, partnership and community building.
By the Global Heritage Fund.