7 Vallenato Musicians From Colombia You Need to Know About 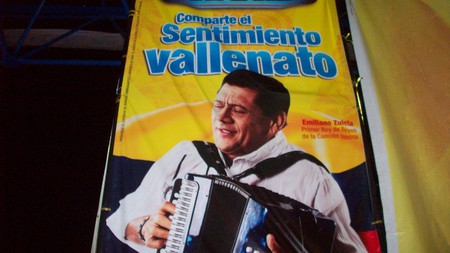 The Colombian musical genre of vallenato is remarkably popular in its native country, especially in Valledupar, its birthplace, where its greatest practitioners have almost godlike status. However, very few people outside of Colombia are familiar with the genre. So, just to get you started, here are some of the greatest legends of Colombian Vallenato music.

The winner of the first-ever Vallenato Legend Festival in Valledupar back in 1968, Alejo Duran is often mentioned as one of the greatest ever vallenato musicians. Known locally as El Negro Grande in his native Cesar region, his songs are notoriously self-referential and he is prone to punishing himself lyrically. His biggest hits include Altos del Rosario, Pedazo de Acordeón and Fidelina.

Emiliano Zuleta will always be an immortal of vallenato music, thanks to a little number called La gota fria. Zuleta first published this song in 1938 and it has gone on to become one of the greatest classics of the genre, having been covered with great success by Carlos Vives. His two sons, Poncho and Emiliano, are also vallenato composers and have enjoyed huge success, though they have never quite lived up to the reputation of their legendary father.

Lead singer of Binomio de Oro de América, a hugely popular vallenato group, Rafael Orozco Maestre is considered one of the most important representatives of the genre, in spite of his untimely death at the age of just 38. He was the victim of an assassin’s bullet, supposedly from the gun of one of Pablo Escobar’s hitmen. His voice has lived on, though, and Orozco’s songs are still heard on every jukebox in every town in Colombia.

Carlos Vives might not be a popular choice for vallenato purists, but the Santa Marta-born singer has perhaps done more than any other musician to popularise the genre, thanks to his songs fusing traditional accordion music with pop and rock and, latterly, modern genres like reggaeton and hip-hop. His TV acting role as legendary vallenato composer Rafael Escalona in the TV series Escalona catapulted him to fame back in 1991, and singing the songs in the TV series caused him to move towards vallenato music in real life. His great albums Clásicos de la Provincia and La Tierra del Olvido may not be pure vallenato, but they are very listenable.

Jorge Oñate is easily one of the most successful legends of vallenato music, having amassed a startling collection of awards and recognitions during his 50-year career in the genre. With 25 gold discs, seven platinum discs and six double platinum discs for his record sales, Oñate’s vocals have graced many a classic vallenato track and he still performs to this day, having recently recorded a trio of albums with one of the youngest-ever winners of the Vallenato Legend Festival, Christian Camilo Peña.

To speak of vallenato without mentioning Rafael Escalona, one of the founders of the Vallenato Legend Festival, would be criminal (maybe even literally in Cesar region, where he is held in the very highest regard). He was a great friend of Gabriel García Márquez (who loved vallenato and once told Escalona that 100 Years of Solitude was just a 350-page vallenato), and although he never played an instrument or sang his own songs, Escalona is such a legendary composer that he is considered as important to the genre as any singer.

One of the most successful vallenato composers of all time, Guillermo Buitrago has also become synonymous with Christmastime for many Colombians, as some of his most famous songs celebrate the holiday season. He released his music through the iconic Colombian record label Discos Fuentes and is said to have recorded at least 150 vallenato songs in his time.