Lapa © pehdefigo
Those who venture inland from the iconic beaches of Copacabana and Ipanema in Rio de Janeiro are rewarded with the beautiful, hilly neighborhood of Santa Teresa, with grand colonial houses, cobblestone streets and fantastic views. Stroll down the hill and you quickly find yourself underneath the famous arches of Lapa, the heart of Rio’s nightlife scene. We check out the ten best places to dine in this trendy neighborhood, from native dishes to fusion favorites.

Restaurant, Brazilian, $$$
Caiprinhas | © Espen Aaeng
Tucked amidst the jungle, high up in Santa Teresa, Aprazível might be as close as a restaurant gets to a tropical paradise. The deck provides fantastic views over the city of Rio and the food doesn’t disappoint either, adding European twists to Brazilian dishes: heart of palm served with pesto, or lamb served with a canjiquinha(a corn sauce), sweet potatoes, apple and raisins. For drinks, Aprazível serves caiprinhas made with a wide variety of fruits, such as passion fruit, kiwi, or the Brazilian delicacy caju.
More Info
Open In Google Maps
62 Rua Aprazível, Rio de Janeiro, 20241-270, Brazil
+552125089174

Bar, Restaurant, Brazilian
Right in the center of Santa Teresa, the simple yet attractive Bar do Arnaudo has been serving food from the Brazilian northeast for 40 years. This is the cuisine brought by migrants from the desert-like climate of Brazil’s northeast to the industrial cities of Rio and São Paulo. It’s an unbeatable spot for those wishing to experience Brazilian culture. Rich, succulent strips of carne de sol (‘sun beef’), are served alongside chunks of pumpkin, pirão de leite (a fluffy, thick sauce made of milk and manioc flour), and feijão tropeiro, a variant of Brazilian beans served with herbs, dried meat and manioc. Despite a strong emphasis on meat, vegetarians have plenty of alternatives, with options such as grilled cubes of queijo coalho(curd cheese).
More Info
Open In Google Maps
316 Rua Almirante Alexandrino, Santa Teresa Rio de Janeiro - RJ, 20241-260, Brazil
+552121466704
Visit Facebook page

A true Santa Teresa institution, Bar do Mineiro serves food from the state of Minas Gerais, considered by many to be Brazil’s finest culinary region. Indeed, this is a good spot to try Brazil’s national dish feijoada, a rich bean stew filled with generous chunks of meat – such as sausage and salted beef – served with rice and farofa, a manioc flour fried with herbs. Bar do Mineiro is a popular spot and fills up quickly, with drinkers spilling out onto the street until late into the night.

Bar, Brazilian, Beer, South American, $$$
Boteco do Gomes, an old-world bar in the heart of Lapa, is steeped in the traditions brought to Rio by Portuguese immigrants. It’s a great place to stand and have a beer, enjoy a shot of cachaça – Brazil’s favorite spirit, made from sugar cane – or sit down in the saloon-like parlor and feast on large portions before heading out into the festivities of Lapa. Choose platters of steak, grilled chicken and pork, along with the staples of rice and beans, all drizzled in a feisty chili sauce, or perhaps enjoy a stew such as feijoada, the national dish. Portions are big enough to share, making Boteco do Gomes an economical choice.
More Info
Open In Google Maps
62 Rua Riachuelo, Centro Rio de Janeiro, 20230-014, Brazil
+552125319717

Finding high quality coffee and sandwiches in Rio is not always an easy task. Cafecito is therefore a welcome addition to the city’s culinary scene. On a lovely wooden veranda, surrounded by trees and artwork, Cafecito is the perfect place to relax in the shade with a cappuccino or cafe latte, alongside an elegantly crafted sandwich, such as toasted ciabatta with pastrami, Gouda cheese and basil, or a local variant with cheese and banana. Cafecito is also distinct from its counterparts for serving an impressive variety of craft beers, with a depth and flavor generally absent from the light, ice-cold beverages preferred in these parts.

Bar, Restaurant, Brazilian, South American, Asian, Vegetarian, $$$
Espirito Santa serves one of Brazil’s lesser-known cuisines from the Amazon in a restored 19th century mansion. The chef, Natacha Fink, is herself from Manaus in the jungle state of Amazonia and brings the best ingredients and techniques with her to create exciting dishes. She carefully prepares a variety of fish, such as the Amazon River native tambaqui, manioc and all sorts of fruits and nuts. Try the fresh water fish served with nut rice, prawns and tucupi, a sauce made from manioc; or indeed one of the restaurant’s many interesting drinks, such as a caipirinha – the iconic Brazilian cocktail – made with Amazonian fruits like cupuaçu.
Looks like it's closed Hours or services may be impacted due to Covid-19
More Info
Open In Google Maps
264 Rua Almirante Alexandrino, Santa Teresa Rio de Janeiro, 20241-260, Brazil
+5521980621043
Visit website

Right at the center of Lapa’s world-famous nightlife scene, this spacious, open-air pizzeria offers party-goers respite from the hustle-bustle of Lapa’s main thoroughfare. Diners can relax amid the old-world decor, fill up on a delicious pizza and a choppe – a draft beer – and take stock of the madness around them, with live samba overflowing from the party outside. Pizzaria Guanabara doesn’t offer fine-dining per se, but their pizzas are made firmly in the tradition first used in Brazil by Italian immigrants at the turn of the 20th century – thick, cheesy and with lots of hearty toppings. It is also open late, to refuel after wild parties long into the night.

Bar, Cafe, Brazilian, $$$
The owners of Cafecito built Rústico above their original cafe, on a tranquil veranda high up in the trees. Rústico produces food with the same finesse as their downstairs neighbor, but on a larger scale: a wood-fired pizza oven promises sophisticated pizzas, such as eggplant, olives and cherry tomatoes. Alternatively, they boast creations such as pasta with prawns, asparagus and white wine, or a picanha Carpaccio – the finest and most popular Brazilian cut of beef. Rústico operates with an elegance that’s not readily available elsewhere. An impressive wine and beer list completes the menu.
Looks like it's closed Hours or services may be impacted due to Covid-19
More Info
Open In Google Maps
121 - Santa Teresa Rua Paschoal Carlos Magno, Rio de Janeiro - RJ, 20240-290, Brazil
+552134973579

Despite being surrounded by the ocean, good seafood is not always high on the agenda in Rio. Sobrenatural puts this right, with an extensive list of dishes featuring fish and seafood in all sorts of varieties. It’s a great place to try some Brazilian seafood dishes, particularly from the Bahian coast, with their African-inspired cuisine. Moqueca – a fish stew full of coconut, spices and fruity flavors – is a must for any visitor to Brazil and Sobrenatural offers a wide variety of moquecas, experimenting with varying flavorsome fishes and ingredients. Seafood risottos and pastas complete this impressive menu. The place itself is colorful and atmospheric, reminiscent of seaside restaurants in coastal fishing towns. 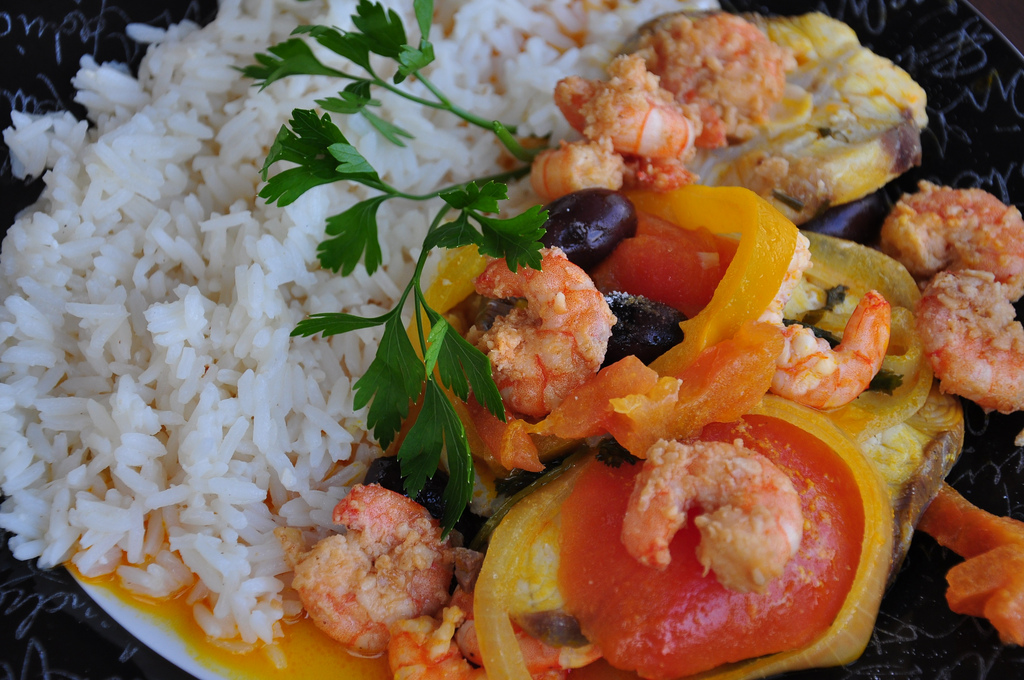 The Street Food of Lapa

Although not a restaurant, no list of places to eat in Lapa is complete without giving the street food a passing mention – a truly Brazilian experience. As the sun sets, stalls selling innumerable varieties of food and drink begin to appear on every corner and alley. Start with the stalls under the arches of Lapa – hidden amidst the cheap hot dogs, one can find all sorts of Brazilian delicacies, such as caldos de mocotó (soup made with cow feet). Carry further on along Rua Mem de Sá and Rua Riachuelo to find barbecues on the street, or old ladies selling fried pastry pasteis. The unpredictability and informality – what’s there one day may not be the next – is all part of the beauty.