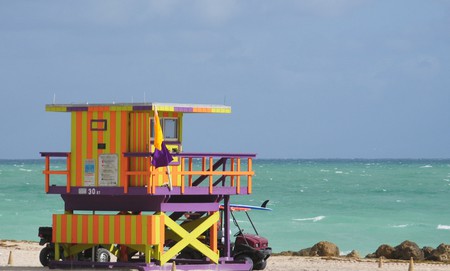 Latin music is having a great time at the moment, what with Justin Bieber hopping onto the Spanish-language music bandwagon with his usually excellent, sometimes garbled nonsense cover of the already smash hit song ‘Despacito’ and Shakira’s new album shooting to the top of the charts in 34 countries. However, this year has also seen the release of some impressively produced Latin music videos, whether they’re from smash hit artists or lesser-known singers – here are the top 13 of 2017 thus far.

‘Hey Ma’, the latest offering from Colombian powerhouse J Balvin, in partnership with the divisive, one-line wonder Pitbull and featuring a debut Spanish-language outing from Camila Cabello, may not be the obvious choice for one of the best Latin music videos of the year. However, this Fate of the Furious soundtrack song has one of the most colourful, picturesque locations of any Latin music video to date this year; shot on Miami’s famed Española Way, the Little Habana vibes are strong, and it’s easy to see why it entered the charts at number five.

The year 2016 marked the musical return of one of Mexico’s most popular bands, Café Tacuba, and their new video for 2017 single ‘Futuro’ is singularly compelling and highly aesthetically pleasing. Clever uses of black lights, neon colours and jerky, cut screen dance moves dominate the opening sequence, before the video moves to a trippy shot of the (very interestingly dressed) band members dancing on what looks like the cartoon wing of a toy aeroplane. It has to be seen to be believed.

Another big hitter on the Mexican music scene, Natalia Lafourcade released her delightfully catchy new song ‘Tu sí sabes quererme’ this year, and the accompanying video is a riot of laughter, fun and shaky camera work, combined with some muted colours and beautifully unguarded closeups. Add those elements together, and you’re left with a video that’s the perfect antidote to over-the-top Skins-style parties, conveying an overwhelmingly convivial atmosphere and vibe instead.

Shakira’s 11th studio album, El Dorado, has just shot to the top of 34 charts worldwide, and her latest single from this smash-hit offering also boasts one of the best videos of the year, solely for a much anticipated and hyped appearance from her husband, Pique. Shot using a variety of techniques, including the aforementioned Pique wearing a head cam to get the point of view perspective that pervades the video, this is undeniably one of the better Latin music videos of the year.

How could this list of 2017’s best Latin music videos not include the second fastest song to climb to one billion YouTube views (behind Adele’s ‘Hello’)? Not only has the ubiquitous ‘Despacito’ been embraced in Spanish-speaking countries, but it has also become one of the biggest and best international crossover hits, helped in no small part by the Justin Bieber cover. It was the first foreign language song since ‘Gangnam Style’ to top charts in the UK and is the first Spanish-language song in the Billboard 100 Top 10 since ‘La Macarena’.

Mexican-American Becky G has successfully crossed over into the world of Spanish-language music with her first two singles, ‘Sola’ and ‘Todo Cambió’, from her as yet untitled upcoming debut studio album. In fact, it’s the latter of those songs that has one of 2017’s best Latin music videos, for the gorgeous costume and cinematography, as well as the empowering message that you don’t have to rush to marry the guy your parents approve of. And, well, dogs.

One of only two bands to make it onto this list of 2017’s best Latin music videos is the latest offering from Puerto Rican reggae band Cultura Profética with ‘Música sin tiempo’. Opening on a compelling shot of bald frontman Willy Rodríguez in front of neon blue lights, before switching to a slow-mo, arty sequence of a woman dressed in a very nipple-tastic slip dress, this video is deceptively simple, but beautifully executed, and has some fantastic props and lighting effects to boot.

While the message behind the special additions to this video – think the random and repeated appearance of a chicken – is murky at best, this is easily one of the year’s more visually engaging videos, which shows some inspired post-production decisions. It is particularly noticeable with the flickering black bars over the eyes, the repeated use of split screen shots and transition between black and white to colour and back again. Sure, the song’s nothing special, but the video is fascinating.

The song title may remind you of a certain Netflix hit TV series known as Narcos, and this is not accidental. Rather, this Jalisciense rapper’s vaguely satirical video (complete with a retro title card) is seemingly an attempt to mock the fetishization of drug culture which shows such as Narcos arguably contribute to, and it makes an excellent job of it too. Combine that clever message with what is actually a pretty great, if little known, song and this is a dead cert contender for best Latin video of the year.

This video from Yexian, which opens with a powerful message about suicide, may not have the same satirical undertones as the aforementioned ‘Narcos’ video, nor the bizarre post-production edits and chicken cameos of ‘Extraños’, but it is undeniably gorgeous from start to finish. From the black and white, sped-up panoramic shots of Paris to the incredible clips of roses furling back on themselves, this is less a music video and more of an extremely well-produced short film.

For a brief change of pace, this list moves on to the upbeat sounds of Lola Club, who have one of the most wholesomely joyful videos of the year, which features (some would say) just the right amount of Hawaiian shirts, as well as plenty of arty hammock shots and a vaguely The Hangover–like morning-after-the-night-before concept. It strikes the ideal balance between cheesy and adorable while breaking the myth that all Latin music is reggaeton. Fun fact: Lola Club’s bassist is a famous Mexican YouTuber and taquería owner, Alexxxstrecci.

‘Bajen Pa’ Ca’ is a classic reggaeton video, complete with the problematic addition of writhing semi-nude girls with obscured faces interspersed throughout. However, it does seem to boast a significantly higher and better-quality production value than many other videos in this genre and has some atmospheric drone and street-level shots. Overlook the glorification of sex, money and violence, and this is actually not bad.

J Balvin’s second outing on this list, albeit as a featured artist, is the video for ‘Ahora Dice’, an aesthetically intriguing addition which could easily have been pulled off on a tight budget. Everything from the slow-mo drone shots in the opening frames to the (probably rented) car and black and white touches make this video look far fancier than it probably was, which says a lot for the concept, post-production and editing skills of the team behind it.