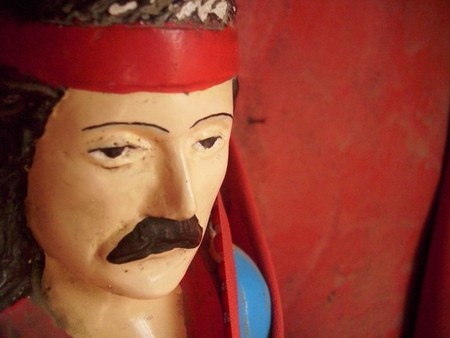 Gauchito Gil is one of the foremost figures in Argentine popular culture. The stories that make up his lore are varied and compelling, and have cemented Gil’s reputation in the country’s folklore. A farmer, a bandit, a deserter, a lover, Gauchito Gil is the revered cowboy saint of the popular classes. Let’s find out why.

Back in the late 1800s, Argentina was in the middle of a number of wars, both internal and external. Rural men were recruited to fight for the nation, and one such forced enlistee was our hero, Gauchito Gil. 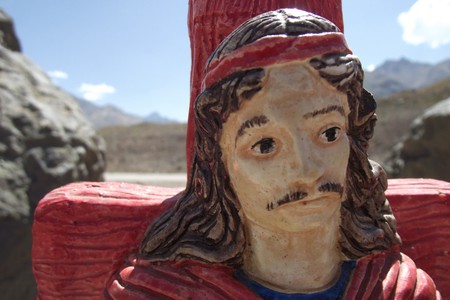 The legend takes place in the province of Corrientes, a humid, tropical state on the Paraguayan border which was undergoing its own period of territorial turmoil with its northern neighbor when Gauchito Gil came on the scene. Born Antonio Gil in the 1840s, Gil was a farmer who became romantically involved with Estrella Díaz de Miraflores, a wealthy widow and ranch owner. However, this liaison between a lowly farm worker and a high society lady was not looked upon favorably by her brothers, or by the local police chief who wanted Miraflores for himself. They conspired to accuse Gil of robbery, but, before he was arrested, Gil fled, joining the army to fight against Paraguay.

Stories of his bravery and courage preceded him and he returned a war hero, only to be drafted again to fight in the civil war on the side of the liberal Blues, a side he was morally opposed to in a war he didn’t support. It was then he took on the mantle of a cowboy bandit, deserting the army with some companions and roaming the hillsides stealing from farms to survive. However, this theft soon transformed itself into a generous act and Gil earned a reputation as something of a quasi-Robin Hood, stealing from the rich and giving to the poor. He was protected by local peasants who respected him, and even saw him as a magical and mystical figure who could resist bullets and cure illnesses. 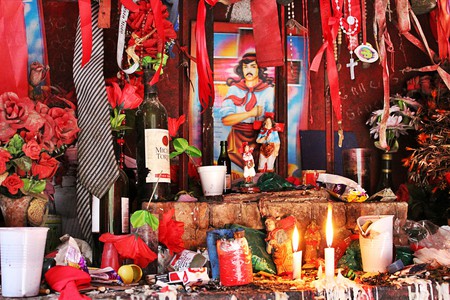 Gil was captured by the authorities after they caught him hiding in the woods, and they prepared to bring him to a nearby town for a trial. However, an impatient guard cut the journey short and decided to execute Gil then and there, first hanging him from a tree by his legs and torturing him. Gil’s reputation for wizardry should have been heeded by the guard at this point, as he implored him to wait, saying a letter of pardon was on its way to Mercedes, and that the letter also had news of a sudden illness that had struck the guard’s son.

The guard didn’t believe Gil, even when he told him the only way his son would survive was if the guard invoked Gil’s name and asked him to save the child. Thinking this folly and unwilling to listen to the criminal cowboy, the guard brutally slit his throat. He would have done well to listen, as when the police officer arrived in Mercedes, there was in fact a note pardoning Gauchito Gil, and his son was indeed sick. The guard panicked and, despite only recently having murdered Gil, he prayed to the outlaw to heal his son, and the next day his son was back to good health. Believing finally in the powers that Gil possessed, he arranged for a proper burial for the merciful cowboy and painted the cross above the grave red so everyone would know the story. 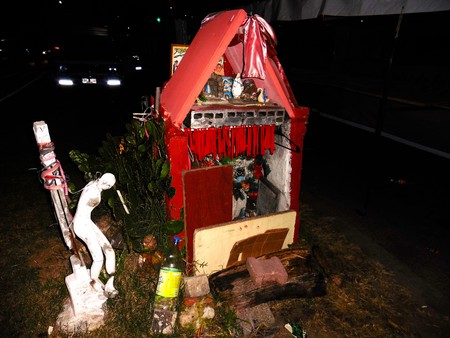 Now Gauchito Gil has reached mythical status in Argentina, and although not recognized by the Catholic church, he is considered as a sort of common-law saint, especially among rural and working classes. It is common to ask Gauchito Gil for favors, and in return his followers will leave red crosses and little altars along the roadsides with signs that say “Thanks Gauchito Gil!” His presence is particularly felt in northern Argentina where the legend originated, and each year over 200,000 pilgrims visit his resting place in Mercedes, especially on January 8, the day of this death, when festivals and celebrations take place, making the anniversary a lively occasion, just as the cowboy saint would have wanted it.