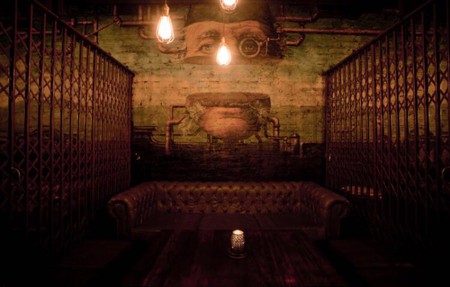 If you’re looking for an “unforgettable” night in Buenos Aires, you can take the classic jazz tune to heart by exploring the city’s swelling speakeasy scene. Inspired by the illegal pubs and drinking clubs of the 1920s Prohibition era in the United States, Buenos Aires’ speakeasies offer superior cocktails and old-world environs perfectly suited to your best flapper or dandy do-up. So pull out your best vintage outfit (or get one here), grab this guide, and hit the town.

From the outside, Anasagasti looks like a standard neoclassical Buenos Aires apartment building, with the exception of a notably cool, carved-wood door. Once you step across the threshold, however, you’ll find yourself in a cozy, vintage-inspired bar full of candles, velvet-covered chairs, and a striking Art Nouveau chandelier. Anasagasti, which opened its doors in 2016, is the new kid on the speakeasy block; their upstairs restaurant is still in the works (it’s due to open at the end of the year). The bar serves small appetizer plates – the squid salad is a standout – as well as, of course, cocktails. We recommend the Cria Cuervos – an absinthe-perfumed, rum-based cocktail that you pour through a dark chocolate egg to serve – or the unusual grapefruit-beet Pretty In Pink. Located in the elegant European neighborhood of Recoleta, you can find out more about Anasagasti here. 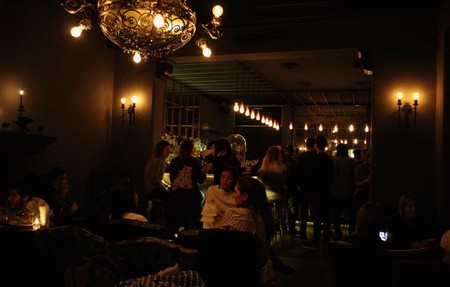 The Harrison Speakeasy is both a secret drinking club – with actual membership cards and everything – as well as a secret bar that non-members can access after dining at the premises’ Peruvian-Japanese restaurant, Nicky’s New York Sushi. The idea is that once you’ve had your fill of seafood (perhaps your first since landing in beef-loving Argentina), you ask to see the bodega. The wait staff will nod knowingly and usher you through a secret passageway into a speakeasy done up exactly like a 1920s-era bar, complete with a piano player. Order the Union Pacific, which comes in a small train and features a chemical reaction that makes it “smoke.” There’s another cocktail hidden in a book, in a nod to Prohibition practices, and other fun touches in that vein.

Another new speakeasy, J.W. Bradley, has taken the legendary Orient Express train for inspiration. Visitors are taken on a simulated train journey to the bar, where they are provided with a variety of old-world cocktails inspired by flavors found at various stops made by the Orient Express around Europe. One of the founders of the bar, Martin Brenna, told Infobae that many of the speakeasies in Buenos Aires are superior to those of New York or London. “So for me, the nightlife in Buenos Aires is great,” he said. Follow J.W. Bradley here.

Built in an old warehouse, the Victoria Brown Coffee & Bar in the chic neighborhood of Palermo is an elegant café by day, and a trend-setting secret bar by night, which serves up a fascinating assortment of alchemy-inspired cocktails. The steampunk-style bar, which is accessed though a moving wall, was designed by Hitzig Militello Architects in 2013 with the Industrial Revolution in mind, and has since become one of the city’s most popular spots. Named after the alleged love affair between England’s Queen Victoria and her servant John Brown, the bar features graffiti art portraits of the two (the Queen is on the outside of the building, Brown an interior wall), the work of prominent Argentine street artist Martin Ron. Victoria Brown has a basement laboratory and the cocktails created here by master bartender Ezequiel Rodriguez are exceptional – the lavender-infused La Provence is a must-try.

Florería Atlántico is an elegant flower shop and café whose underground bar offers cocktails inspired by the flavors of countries that had (or continue to have) a large immigrant presence in Argentina. The idea makes for inventive flavor combinations that reflect the melting-pot history of the nation itself. While less of a “speakeasy” per se, the old-world flower shop vibe permeates the underground bar as well. Located in the Retiro area, the bar section is only open at night. More information here.

Frank’s Bar is accessible by way of a password that changes weekly. Get hints on Mondays through their Facebook page, and on Twitter and Facebook on Thursdays. Located in Palermo, Frank’s Bar was one of the first speakeasy-style bars to make it big in Buenos Aires.