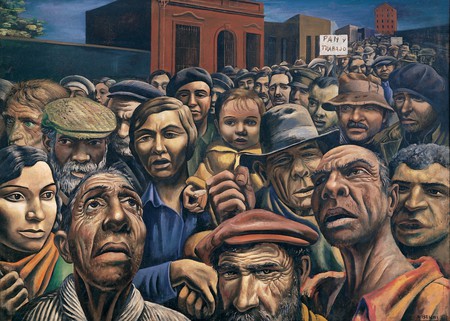 The Buenos Aires Museum of Modern Art is a shifting, turning, twisting, colorful mosaic of sculpture, tapestry, paint, wood and metal as it springs from the riverbank of Rio de Playta. For decades, artists who had never been known outside of the small corner of the world which is South America have been bursting onto the global scene of art mastery and joining the ranks of Picasso, Warhol and others. Here are 10 of the best.

Homage to the Square by Josef Albers

Albers was a German-born artist who established the basis for important — and far-reaching — art training. Born in Bottrop, Germany, Albers served until 1913 as a school teacher and trained as an art teacher in Berlin. Under Nazi pressure in 1933, the artists fled with many abandoning the nation. Albers was given a job managing a new art school at Black Mountain College in North Carolina, where he lived until 1949. On leaving Black Mountain, Albers took a job managing the department of design at Yale University. The most prominent of his works is Homage to the Square, a series he began in 1949. 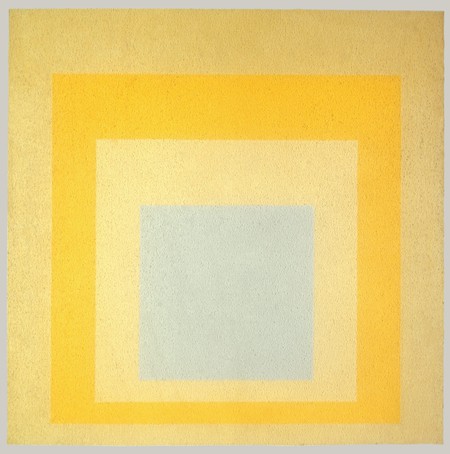 Homage to the Square / Wikipedia

Tracey Rose is a South African artist residing and working in Johannesburg. ‘Making work is a documentation of a journey,’ is the opening sentence of her artist’s statement. Her life has been a journey. Born in 1974 in Durban, Rose attended the University of Witwatersand in Johannesburg where she received her BA in Fine Arts in 1996. Since finishing, her work has been seen universally as she explores questions about gender and color — and uses motifs of her own body and body hair. Rose insists her work explains the constraints of dogma and the mistakes in cultural dialogue. Also apparent in her work is her encounter with identity. 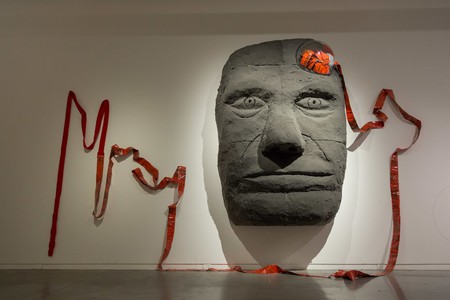 Born in Rosario, Argentina in 1905, Berni was an Argentine figurative artist connected with the Nuevo Realism (New Realism) movement. His work portrays poverty and industrialization’s effects in Buenos Aires. Berni earned a scholarship from The Jockey Club of Rosario allowing him to study art in Europe in 1925. Picking Spain, he visited Madrid, Granada, and Cordoba before ending in Paris with fellow Argentine artists. Berni went home to Rosario briefly and returned to Paris in 1927 when he shifted to a new interest in surrealism. Berni returned to Rosario where he lived until the 1976 coup. Relocating to New York City, Berni was frustrated as he found the city hedonistic, consumerist and spiritually sick. His New York paintings express the social irony he saw. 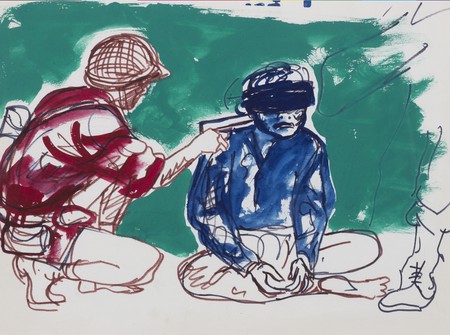 Born in La Plata, Argentina, in 1891, Manes first developed an interest in sculpture as a child when he attended La Plata Fine Arts Museum. When he was unable to work as a typographer due to an accident, Manes fell back on his adolescent interest and studied the fundamentals of sculpture from Arturo Dresco who owned a local atelier – or artist’s workshop. In 1907, his family traveled to Buenos Aires where he entered into the National Fine Arts School. He was kicked out almost instantaneously because of a disobedient streak, but was chosen to produce a commemorative gold medallion for Vice President-elect Victorino de la Plaza who, in turn, got Curatella a scholarship to Italy. 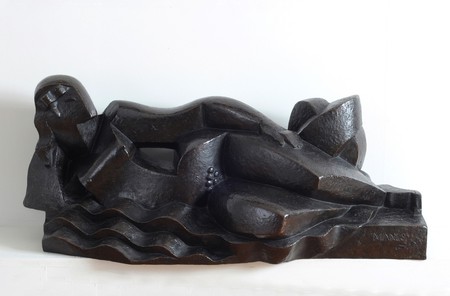 The Encounter by Raquel Forner

Born in 1902 Buenos Aires, Forner spent much of her childhood in Europe where she developed an interest in art during the Spanish Civil War. As a young adult, she returned to Buenos Aires and was offered a position teaching at the National University Art Institute. Forner’s work demonstrates an interest in then-current events as she borrowed ideas from surrealism. Throughout the 1940s and 1950s, she produced several series on tragic themes in a mainly expressionist mode. In 1957 as the ‘space race’ took off, her attention turned more to imagined scenes of interplanetary travel and several of her works are in the American National Air and Space Museum in Washington. 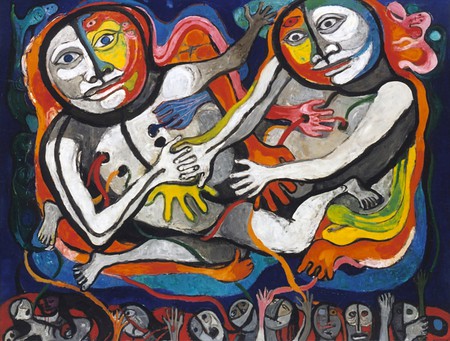 An Argentine painter, Macció is connected with the local avant-garde shift which transpired in the 1960s. Macció acquired an interest in sketching, he was self-taught and was chosen as a graphic designer when he was just 14 years old. With some early renown, his first exhibition was held in 1956 where his abstract art brought him recognition from architect Clorindo Testa. A self-declared rebel toward aesthetics in art, Macció said much of the conventional portraiture available at the time was ‘pink chocolate’. Macció’s figures were often the dead or dying and laid against backdrops of urban blight and waste. 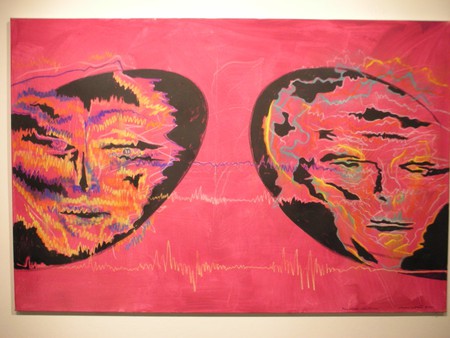 Born in 1959, Pombo is an Argentine artist who started his career with images linked to rock, psychedelia and the gay culture. Growing up in Buenos Aires, Pombo went to an art school directed by Ana Srezovic where he experimented with clay and enamel on metal. When Pombo graduated high school in 1978, he started work as a gofer with an ad agency. That very year, he enrolled in — and dropped out of — Escuela Nacional de Bellas Artes Prilidiano Pueyrredón, instead travelling to the northern province of Salta. When the Falkland’s War began in 1982, Pombo left Argentina for Brazil where he conceived illustrations relating to the gay night life in São Paulo. Displaying a Walt Disney influence, his reputation grew. 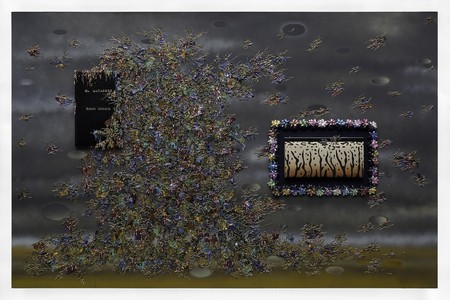 We Are Many by Marta Minujín

Born in the San Telmo barrio of Buenos Aires, at age 16 Minujín married Juan Carlos Sabaini in 1959 and had two children. The same year, she first exhibited her work at the Teatro Agón. A National Arts Foundation scholarship gave her the chance to go to Paris where she was spurred to produce ‘livable sculptures’. Returning to Argentina in 1976, she formed Venus de Milo from cheese, and in 1982 was granted the Konex Award, the highest in the Argentina social realm. With democracy restored to Argentina in 1983, Minujín created a memorial to an inanimate martyr of the regime: freedom of expression. Minujín accumulated 30,000 banned books and had them installed on a boulevard median along the Avenida 9 de Julio. Taken down after three weeks, she gave the recently unbanned books to the public. 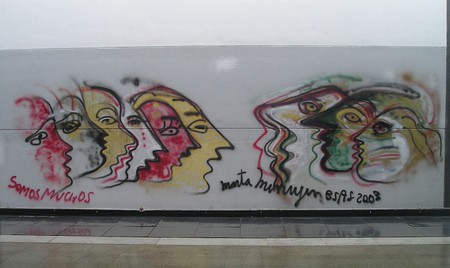 We are Many / Marta Minujin / Wikipedia

Born in 1892, Argentine painter, Pettoruti created a scandal with his cubist display in 1924. At the turn of the century, Buenos Aires was full of artistic development while Pettoruti held close to cubism and abstraction. Pettoruti is recognized as one of the more important artists in Argentina in the 20th century. During Pettoruti’s youth, he found his artistic talent as he worked on caricatures of people. It was a drawing among this collection that offered him the means to study abroad. In later years, Pettoruti pushed towards pure abstraction. Following a trip to Europe in 1952, his interest in pattern and design grew and his paintings of the era consisted of geometric arrangements. 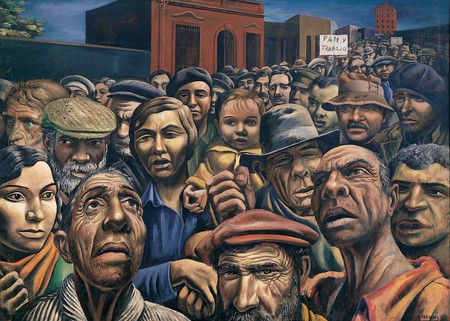 Xul Solar was the assumed name of Oscar Agustín Alejandro Schulz Solari, born in 1887. Educated in Buenos Aires, first as a musician, then architect, Solar worked as a school teacher as he held numerous minor jobs in the city’s bureaucracy. In 1912 Solar left for Hong Kong, but got off in London where he consequently traveled to Turin and Genoa. Over the following years, despite World War I, Solar moved throughout Italy until eventually working as the Argentine consulate in Milan. Schultz Solari first signed ‘Xul Solar’ on his work in 1916. An inspection of his adopted name shows that the first name is the converse of ‘Lux’, Latin meaning ‘light’. Combined with solar, the name reads as ‘light of the sun’. 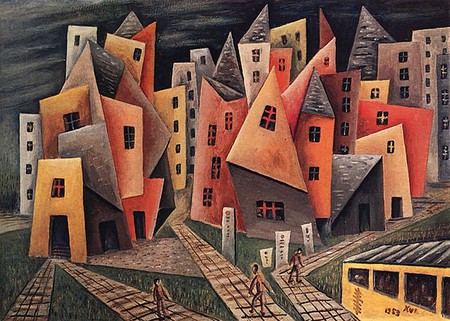 Currently living in Unquillo in Cordoba province, Carlos Alonso was born in Mendoza, 88 years ago. Leaving school at 14 to study at the Academia Nacional de Bellas Artes, Alonso’s work was inspired by the expressionist movement. Painting bodies in a tortured way, he expresses the pain and misery found in humanity. Alonso’s own suffering may have influenced his work. His daughter was abducted, beaten and disappeared during the 1976 military coup in Argentina. His preferred topics are social issues, brutality and eroticism. Following his own loss, the artist went into hiding in Italy and then Madrid before returning to Argentina in 1981. 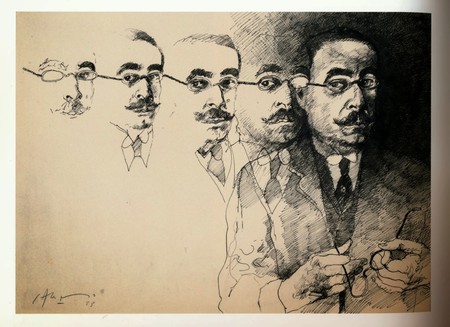 Carlos Alonso / ClaudioTomassini.blogspot.com.ar
Give us feedback