What the 2018 Abortion-Rights Vote Means for Argentina 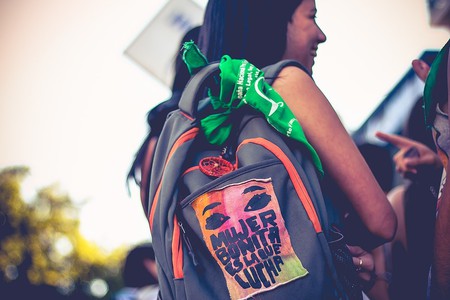 Tied to backpacks or worn around necks and wrists, the green handkerchief is a symbol of pride for millennial activists | Paula Kindsvater (CC BY-SA 4.0) / WikiCommons

Argentina has made a step towards becoming the most feminist country in Latin America with an abortion law that made it to Congress. The inspiration from this advancement is resounding in colorful waves of literally colorful handkerchiefs representing feminist movements across Latin America.

Green is  the color of Argentina’s pro-choice campaign . An immense ocean of green handkerchiefs waved just outside Congress on June 14, 2018, as legislators inside the building debated women’s fate. The crowd stood waiting for hours, undeterred by the marathon-like session that lasted deep into the night, to hear the outcome of the historic vote that brought Argentina one step closer to legalizing abortion. 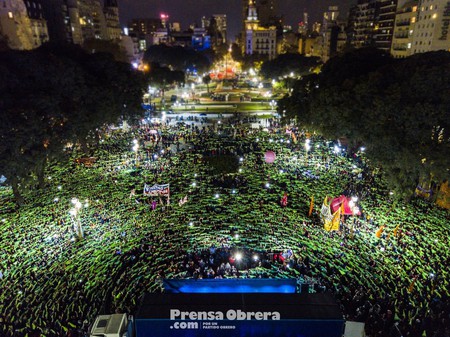 For weeks the pro-choice activists gathered outside the Congress in support of the legal abortion bill. | © Drone Prensa Obrera/Prensa Obrera / WikiCommons

After more than 22 hours of debate, the bill to legalize voluntary abortions up to 14 weeks passed the lower house of Congress by a tiny margin. Although it was ultimately defeated in the Senate, just seeing the bill come as far as it did was a win for activists and proved that a large enough public outcry could change the conversation around women’s rights in Argentina.

This progress is one manifestation of a growing movement in Latin America, where 97 percent of women live in countries where legal abortion is either strictly restricted or unavailable. The explanation is largely historical: Latin America was shaped by the Catholic Church, which not only teaches that abortion is immoral but also takes actions to oppose its legalization. 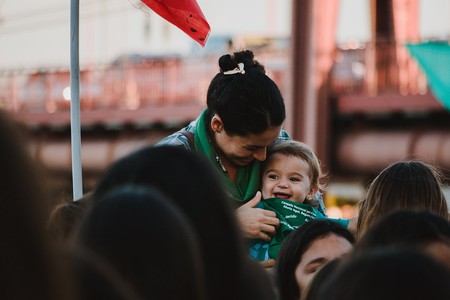 "This is the revolution of the daughters", as one prominent Argentine journalist and feminist activist said. | © Agustina Girardo / WikiCommons

Luciana Peker, a prominent Argentine journalist and feminist activist, says this is “the revolution of the daughters.” After more than 30 years of feminist activism – and six attempts to obtain this law – she sees this milestone as the blooming of a juvenile spring, a movement whose main protagonists are millennials ,  and centennials , who felt inspired to take to the streets with their message.

Abortion is currently illegal in Argentina except in cases of rape or when the woman’s life is in danger. But even in such cases, women are sometimes subject to criminal prosecution for seeking abortions, and often have trouble obtaining reproductive services, such as contraception and voluntary sterilization. An estimated 450,000 abortions take place every year in Argentina, the vast majority of them illegally and with poor hygienic conditions. According to Argentina’s ministry of health, unsafe abortions represent the main cause of maternal deaths. Abortion is an undeniable reality, so this vote would help decide if women should die from it or not.

Argentina’s abortion laws, stating that it isn’t punishable only if the mother’s life is in danger or “if the pregnancy is the result of rape or sexual assault of a feeble-minded or demented woman,” were written almost a hundred years ago by 158 men. Today, thanks to Argentine quota law, more than a third of the 257 seats are held by women. Even though not all of them voted in favor of legalizing abortion, a great many of the women were essential in achieving this significant result. 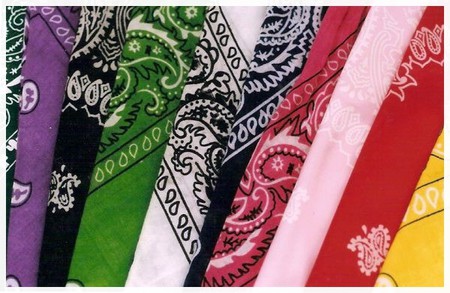 The progress in Argentina has already spurred a series of analogous campaigns in other Latin American countries. Argentina’s green bandanas have inspired each country to adopt its own distinctive color: Chile (burgundy), Mexico (white with gold), Peru (salmon), Colombia (yellow), Ecuador (lilac) and Costa Rica (which hasn’t chosen a color yet). Who says a revolution has to be staid and colorless?

In Argentina, the green handkerchief became a symbol of empowerment and courage, tied to backpacks, proudly worn around necks and wrists. And (more broadly, as Peker explains) the bandanas also represent their freedom, their rights, and their joy. In spite of its acquired meaning, the green color was chosen 15 years ago due to its neutrality: no political party or institution was using it. Each green handkerchief displays the campaign’s slogan in white type: “Sex education to decide, contraceptives to not abort, legal abortion to not die.” 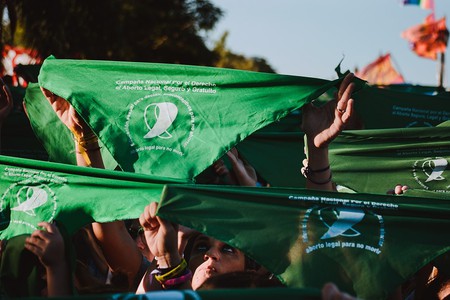 The slogan reads “sex education to decide, contraceptives to not abort, legal abortion to not die.” | © Agustina Girardo / WikiCommons

The handkerchief itself draws heavy inspiration from the “Mothers of Plaza de Mayo” movement, where mothers of “the disappeared” wore white scarves of remembrance on their heads. These thousands of Argentinian “desaparecidos” were taken and tortured and killed during the country’s 1976-83 military dictatorship and have been commemorated over the past 40 years. Every generation has a fight of its own.

This “green wave” of young feminists took to the streets, but it didn’t end there – they also took every chance they could to discuss the matter at home, at work, through outstanding pieces of journalism and even through humor and social networks. So effective was their campaign that many representatives even claimed to be voting in favor because of them and for them. Many even admitted that it was their daughters who made them change their conservative views. 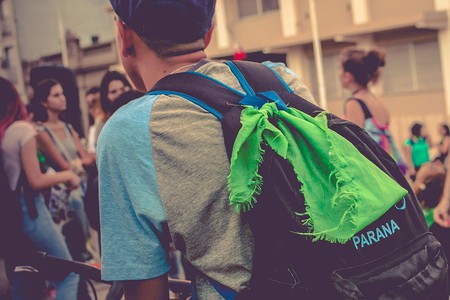 In Argentina the green handkerchief has become a symbol of empowerment, of complicity and of courage. | © Paula Kindsvater / WikiCommons

One of the most prominent figures leading the pro-choice fight, congresswoman Silvia Lospennato from the government’s party, dared to ask pro-lifers (or “anti-rights” as their opponents rebranded them) if “they would force their own daughters to be mothers against their will or denounce them if they found out they had an abortion.” Another congressman, this time from an opposition party, Daniel Filmus, wondered how he would be able to look his daughters in the eyes if he were to return home without the bill.

Despite the massive demonstrations and public support, the country’s restrictive abortion laws remain on the books, but the campaign to overturn them is still going strong. Even as winter began painting the city gray, green handkerchiefs could be seen sprouting here and there. And the multicolored cloths are likewise blossoming across all of Latin America. Maybe, to misquote Virginia Woolf, Argentina (and its neighbors) does deserve the victory of a juvenile spring.