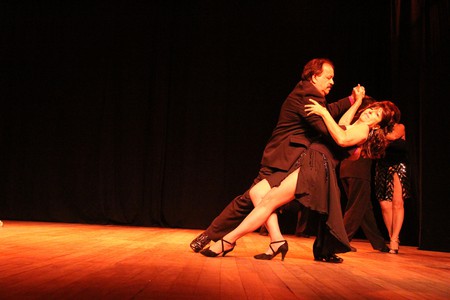 Short on cash but still hoping to enjoy Buenos Aires? Good luck. Traveling on a budget in Argentina is unlike budget travel elsewhere. The prices are high, inflation is hovering (as of January 2017) around 39%, and there’s no relief in site. Housing is expensive, with places running around 11,200 Argentine Pesos (USD$700) per month for a small, 500 square foot studio apartment, and these astronomical prices are passed along to travelers and tourists as well. Don’t be intimidated, however – Buenos Aires is South America’s second largest city and has a plethora of activities which are either free or very affordable. Read on for Culture Trip’s guide to budget travel in Buenos Aires.

What to Do and See

Buenos Aires has a variety of organizations offering free walking tours, an active way to get a comprehensive grasp of the city’s history. Most walking tours center around Congresso or Recoleta, but others can be found here.

Hoping for a leisurely stroll without the tour guide in tow? Reserva Ecologica is an oasis in the middle of Buenos Aires. The free-entry Reserve spans across 900 acres of green space and lagoons, great for walking and jogging (as well as birdwatching). Many find it a great escape from the hustle of the city, but be sure to bring water. There are no fountains in this vast park and no vendor from whom to buy H2O.

Recoleta is one of the fancier barrios and is known for its variety of architecture, nice parks and possibly the most popular cemetery in the city. When the sun goes down, Recoleta, with its neighboring barrio, Palermo, becomes the party and nightlife capital. The biggest concentration of bars and nightclubs is in these two neighborhoods, which come to life around midnight and remain vibrant until the wee hours of the morning. It’s not uncommon to find revelers still dancing, swaying, and drinking at six in the morning. 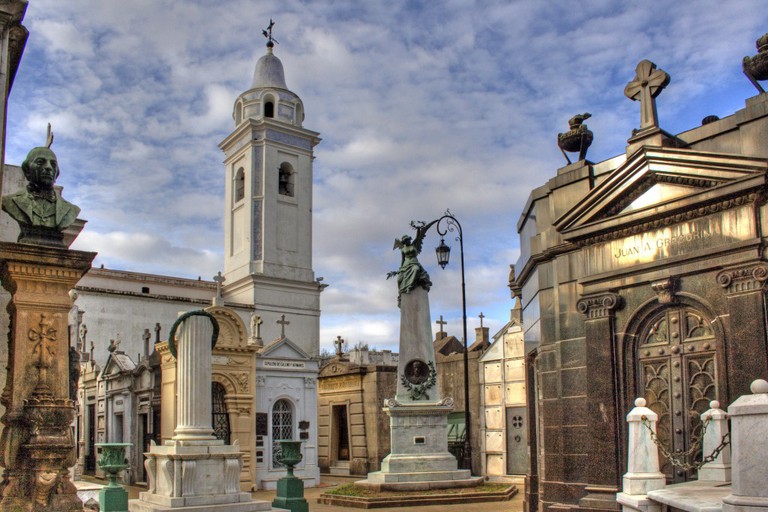 Besides bars and nightclubs, Recoleta is ‘home’ to Eva ‘Evita’ Peron | Wikimedia

What other cities call graffiti, Buenos Aires calls street art, and an active group of free tour companies have sprung up in the capital to accommodate this growing scene. Many of the walking tours focus on Colegiales and Palermo Hollywood as murals in the northwest part of the city are popular. Other tours both start and finish in San Telmo as it winds through barrios in the southeastern section including La Boca and Barracas. Most tours last from 30 minutes to a couple of hours; spend a little time on Google to find the tour that will take you through areas you are hoping to see. 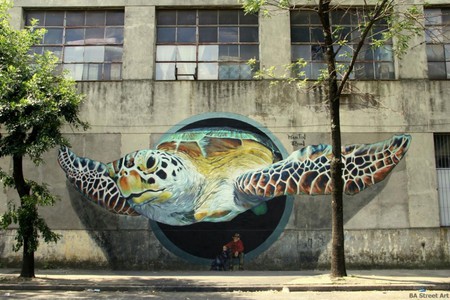 A popular part of Argentina’s culture is Tango. Tango shows occur throughout the city each night, but to enjoy it in a less ‘touristy’ way, head to Boedo and some of the lesser known barrios. Tango was born in San Telmo, and it can be watched for free each Sunday at the giant open-air market which is a huge draw for tourists. If you’re brave enough, grab a stranger and jump in — you’re always welcome at the street dances. 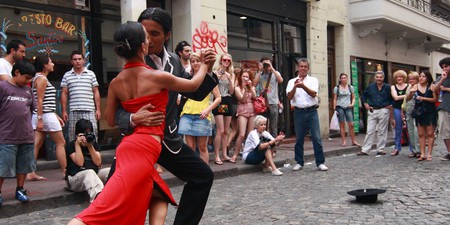 Skyrocketing restaurant prices have become a city-wide plague. Many restaurants don’t provide menus as the cost of reprinting to reflect the almost daily hikes in price is prohibitive. Look for the chalkboard in front to see what the current prices are, and welcome to the porteno pastime of complaining about the cost.

Always busy – with abysmal service and a hit-or-miss menu – Las Cabras nevertheless remains a good spot for a cheap meal in Buenos Aires. 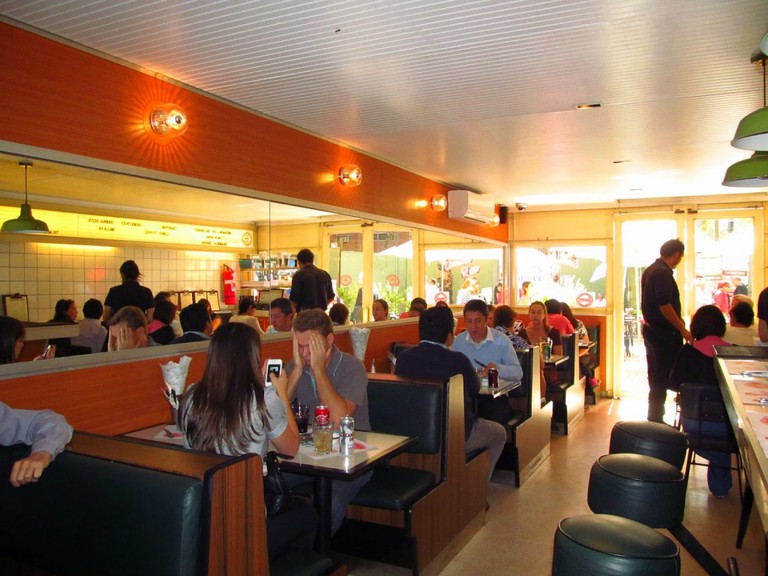 Cheap, tasty and no-frills, this restaurant hasn’t gone Hollywood, so the quality meat is still a fair price. 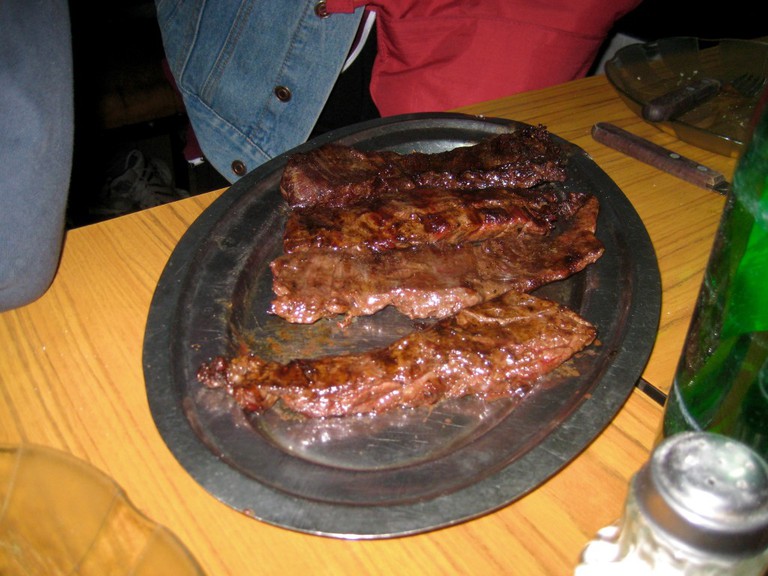 Club Eros used to be the ultimate in affordable eats, but prices have adjusted. You won’t get the best meal in Buenos Aires, but it’s still a solid, inexpensive spot with an Argentine atmosphere. 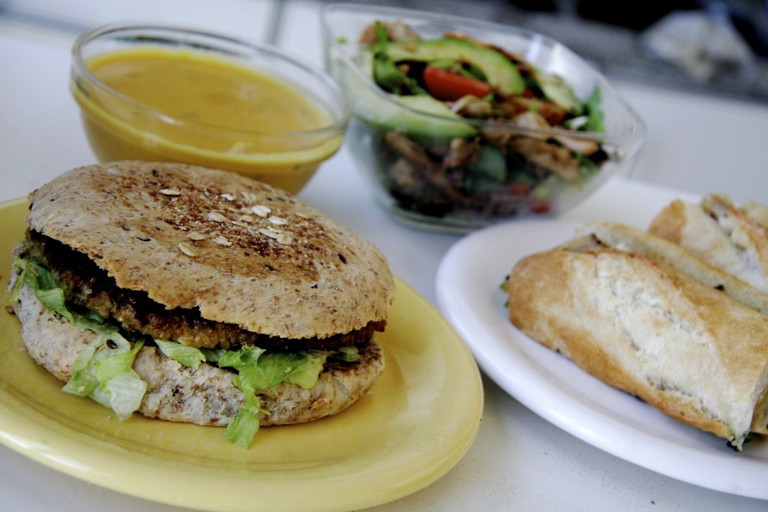 When you’re finished with Tango for the night, San Telmo is where most of the hostels are concentrated and easily accessible. One word of caution, however; the area around San Telmo’s main street — Defensa — is fairly safe, but still be careful if you decide to wander beyond this area after dark.

If you’re traveling on a budget (and it’s a safe bet you are, otherwise you wouldn’t be reading this), forget about the hotels. If you don’t mind ‘rough camping‘ or ‘love motels’ — where you can ‘book ardour by the hour,’ or being miles out of the city, your only and best choice are the hostels. Most of the cleaner and safer hostels start at ARS1600 (USD $100) per night, per person.

Travel on a budget to Buenos Aires? It’s not easy. Yet, with a little bit of planning, it’s doable. 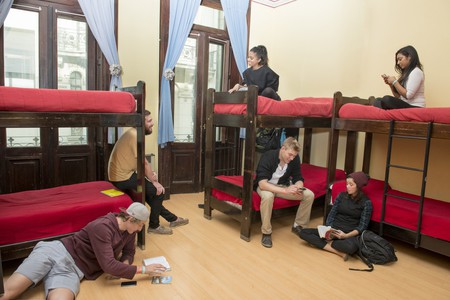 Milhouse Hostel in Buenos Aires | Milhousehostel.com
Give us feedback