The neighbourhood of Barracas in southern Buenos Aires often doesn’t even make it onto tourist maps, and you will hear about Palermo 10 times over before Barracas is even mentioned. But it’s well worth checking out this typically porteño neighbourhood. Here are seven reasons why. 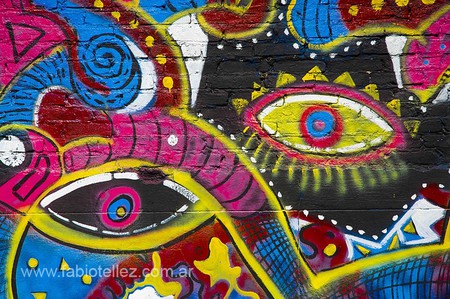 Barracas could be considered the mecca of street art in Buenos Aires right now. While murals and paintings adorn the walls of almost every neighbourhood in the capital, it is in Barracas that they have the most important connection to the community, in large part thanks to an ongoing community project led by artist Pol Corona and manufacturing company Sullair. See work by local artists such as Jaz and Pastel, as well as international names like Zosen and Mina Hamada and Simon de Madera.

The Art and Design District

Barracas has been able to become the street-art haven that it has partly thanks to the fact that it is located within the Distrito de los Artes, or the arts district. This is a city government designated area. Check out the Centro Metropolitano de Diseno, an incubator for creatives located in the renovated fish market in the centre of the neighbourhood.

Perhaps Barracas might not be the obvious choice for retail therapy, but actually, the neighbourhood has benefited from the huge Central Park complex, which is home not only to offices and start-ups, but also to the Levi’s and Nike outlets. Barracas was very much an upper-class neighbourhood back in the 19th century, but then the city was hit by a yellow-fever epidemic and many of the wealthier people moved further into the city and away from the port. Nowadays, it is very much an industrial neighbourhood, but this means there is a healthy dose of eclectic architecture. You’ll see everything from old colonial mansions and conventillos (shared tenements), to warehouses and artists’ studios.

Barracas is one of the poorer neighbourhoods in the city, and as such there is a high prevalence of villas, or slums. This means that there is ample opportunity for volunteering and giving back to the community. Two of the best social projects operating in the area are Club Union de los Pibes, which keeps local kids busy with football, arts and crafts and other activities. Delicias de Alicia is a social project run by Alicia Amende that teaches underprivileged children about the benefits of nutrition. She runs workshops with local kids and funds the project through her vegetarian, closed-door restaurant. Calle Lanin is a quaint side street that runs along the railway tracks. A leafy, cobbled street leads you down to an artistic wonderland: almost all of the facades of the houses are covered in decorative mosaic patterns. This was the brainchild of local ceramicist Marino Santa Maria, who initiated the project by decorating his own house in 1990. The project is still running today.

Perhaps this is not one of the best reasons to visit Barracas, but if you are here you will doubtless come across it, led by its pungent aroma, if nothing else. This river was once one of the most polluted bodies of water in the region, and an ongoing clean-up has been in progress for many years. Polluted mainly by heavy metals and industrial waste from nearby factories, it is also said that the Riachuelo is a dumping ground for dead bodies.