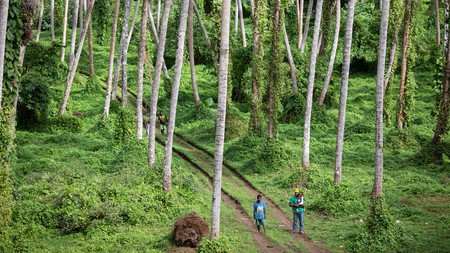 Every year, the World Economic Forum releases a list of the most dangerous countries on earth, and regularly topping the list is an archipelago in the South Pacific. Ranked number one on the World Risk Index for natural disasters, Vanuatu is a dangerous place to live. It lies on the Pacific Ring of Fire, so earthquakes are common, tsunami evacuation warnings stand on every corner and tropical storms arrive without fail every season. But now the country faces an even greater risk – climate change. The frequency and intensity of natural disasters are increasing, with category five cyclones bringing the country to its knees in 2015 and 2020. Combined with the devastating effects of global warming and sea level rises, Vanuatu is more at risk than ever. 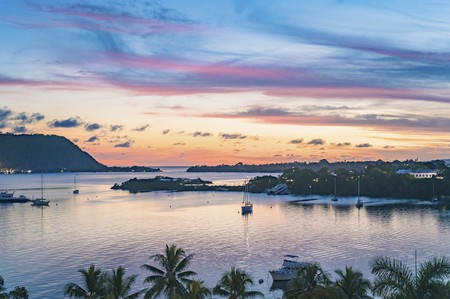 Walk along the seafront in Vanuatu’s capital city Port Vila and you will see the hollow, rusting carcasses of shipwrecks strewn along the shore of Iririki Island. The yachts, fishing boats and small tankers dashed on the rocks are a stark visual reminder of the devastation wreaked by Cyclone Pam. The category 5 storm ripped through the country in 2015, killing 24, displacing more than 75,000 people and wiping out two thirds of the country’s GDP overnight. Five years on, and a similar sight can now be seen on Espiritu Santo island, where boats wrecked by Cyclone Harold are scattered along the shore. The storm flattened homes, tore fruit trees and coconut palms from their roots and destroyed crops when it hit northern Vanuatu in April 2020. Two lives were lost.

“Cyclone Harold was the same category as Cyclone Pam, and like Pam, people lost everything in one night,” says Willy Missack, Vanuatu Climate Action’s network coordinator. “It’s devastating. After Harold, you can see 20 kilometres away from where you stand. Everything has been flattened.”

Vanuatu is hit by tropical storms every year from November to April, but these storms are getting stronger and more frequent. Some 40 years ago, the strongest tropical storms were category 3s. Now, the country is battered by category 5s, the highest band in the tropical cyclone scale.

“This is clear proof of climate change and we cannot deny that,” says Missack, who lives in Port Vila. This change has left Vanuatu’s people, known as the Ni-Van, in fear for the future. “What if we move into categories 6 or 7 storms because of climate change?” asks Missack. “How can we survive on islands in the cyclone belt if we keep losing and losing, and we do not know what will be left in the future?”

Heartbreaking images of destroyed buildings, uprooted fruit trees and damaged infrastructure spread around the world in the aftermaths of Pam and Harold. But climate change is affecting Vanuatu in other more silent and deadly ways.

“Cyclones, floods, severe weather events always capture the imagination because they are dramatic,” says Dr Colin Tukuitonga, head of Pacific and International Health at the University of Auckland. “But the more dangerous effects of climate change for the islands are two other silent dangers – ocean acidification and coral bleaching.”

Acidification occurs when higher levels of carbon dioxide in the earth’s atmosphere are absorbed by the world’s oceans, increasing the sea temperatures. This rise causes coral to expel the algae living in their hard shells, turning the corals white in a process known as bleaching. Coral reefs are essential to the ocean’s health, and damage to them has a far-reaching impact on marine ecosystems, and on the people who rely on the ocean for food and livelihoods.

“In Vanuatu and in other parts of the South Pacific, 80 percent of the population’s protein comes from the sea,” explains Dr Tukuitonga. “When there is coral bleaching, you pretty much kill off the origins of the food chain, so the little fish become scarce, and people struggle.” 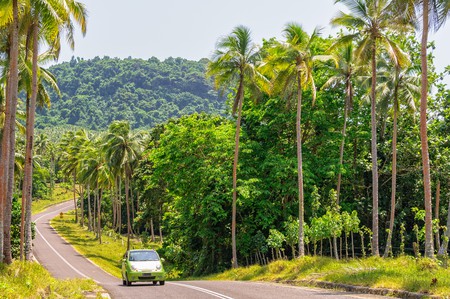 Severe weather events, ocean acidification and coral bleaching are among the threats which loom over the island | © lkonya / Alamy Stock Photo

Like many island nations in the South Pacific, Vanuatu is also at risk of rising sea levels. With global warming causing ice sheets and glaciers to melt, sea levels in the South Pacific have risen by six millimetres (about a quarter of an inch) a year since 1993. In 2011, the United Nations reported that the first climate change refugees in history were from a small island in northern Vanuatu. Residents in the village of Lataw in the Torres Islands had to move their homes hundreds of metres back from the shore. Missack reports seeing cemeteries unearthed because of rising water levels and land lost to the sea on the islands of Pele and Nguna.

“It felt like something had fallen from my body,” he recalls of the shock. “I could see bones. The cemeteries were being removed by sea level rise. I asked the community why this is happening and they say they do not know, but they can see the sea is moving. They showed me where ten years ago they had a football playing area and a nice sand beach, but now the sea has taken over all this.”

Even after building sea walls and planting vetiver grass, which is used to stop soil erosion, the community is still losing land to the sea.

Missack fears their only choice will be to move further inland. This gradual inching forward of the sea onto the shore has also had an impact on crops. Root vegetables such as taro, yams and sweet potato are a key part of the Ni-Van’s diet, alongside seasonal fruit trees like breadfruit, papaya, mangoes, avocados and coconut palms. But farming is becoming harder as rising sea levels cause the soil to turn salty, killing off the crops.

Gilbert Fries runs Million Dollar View Resort and Natongtong restaurant on Espiritu Santo, the second-largest island of Vanuatu’s 83 islands. In July last year, the flooding high tide washed away one of his buildings and swept away thousands of tons of sand from the resort’s beach. He fears rising sea levels will destroy other buildings and make the land impossible to cultivate.

Fries, from Belgium, says, “The water is not yet on my back, it’s already rinsing around my feet. Most island states here in the Pacific have already suffered damage and land loss. We lost over one and a half metres of width over the entire beach – an effect clearly due to global warming and the rise in sea level. It may take another ten years or longer until this area is permanently flooded and lost, but a single flood would be enough to kill most of the vegetation on the site. The vegetables in the garden and the whole fruit trees have only a small salt tolerance. It is frightening to foresee when our land will initially be agriculturally unfit and finally no longer commercially usable, or when it will be the complete victim of the creeping rise of the sea level.”

In Vanuatu, efforts are being made to educate its people about climate change through school curriculums and community outreach projects. In 2018, the country banned single-use plastics, including bags, straws and styrofoam packaging, making it one of the toughest bans in the world. But the onus cannot lie with Vanuatu – a message foreign minister Ralph Regenvanu made clear in 2018 when he proposed suing fossil fuel companies for compensation. He argued that the country contributes only 0.0016 percent of global emissions, but suffers the worst of its effects. For now, the Ni-Van hope people will see the devastating effects of climate change on islands in the South Pacific and make a change to their own lives.

“Reduce your waste, your emissions, and walk to work or use public transport instead of using a car,” Missack entreats. “And big companies working in fossil fuels should go green in energy. Everyone around the world can help reduce climate change, and also help Vanuatu.”