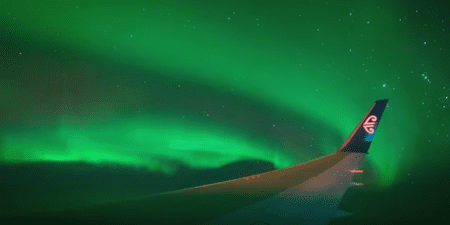 Remember that incredible video we shared with you a couple of months back when Aryeh Nirenberg filmed the Northern Lights from his plane seat? Well, it’s happened again. Except this time, one lucky passenger filmed it all on a chartered flight that flew through the Southern Lights.

It’s safe to say that both the Northern and Southern Lights are probably the most magical cosmic views available to us earthlings on our big blue planet. As you can see in the awesome video below shot by Stephen Voss, 150 lucky people on a flight from New Zealand got to see the spectacle much closer than the rest of us. Jealous!

On March 23, Air New Zealand flight NZ1980 left Middle Earth (shout out to the Tolkien fans) and zoomed across the Southern Ocean to give passengers their best shot at watching the sky phenomenon. Thanks to the equinox, 12 hours of complete darkness made the Aurora Australis much easier to see.

Seats onboard the chartered flight don’t come cheap though. Two economy tickets will set you back a woof-worthy $2,775, and two business-class seats went for –wait for it – $5,973!

For many, the price was worth it. Happy flier Sandra Whipp said: ‘What an amazing night we all had,’ in a Facebook post.

So how does all the magic happen? You can only see the Northern or Southern lights in the high latitudes of our planet (the poles). This is because of the Earth’s magnetic field. The pretty lights form when charged particles explode out of the sun and stream towards Earth. Once they’ve reached us, the particles are dragged down to the poles along magnetic field lines.

Here’s the science part. Once the sun’s charged particles react with the Earth’s neutrally charged atmosphere, the interaction between both makes the particles glow, creating the curtains of the aurora. And there you have it. The creation of the Northern and Southern Lights in a nutshell.

Love all things cosmic? Check out what your country looks like from space!