The Best Shops to Visit On Wellington’s Cuba Street 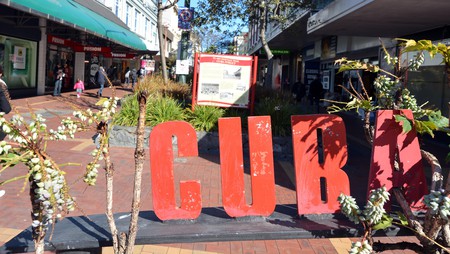 Named after a ship used by the New Zealand Company, Cuba Street is the place to go to discover rich bohemian history. It’s as much of a tourist attraction by itself, with locals also considering it a rich part of their life.

For Wellingtonians, Cuba Street is in the blood. For visitors, it’ll soon become apparent that Cuba Street holds a special place in the heart of the locals. As one of Te Aro’s prominent streets, it’s well-known for shabby chic and bohemian designer clothes, as well as music shops, galleries, cafés and retail stores. A pedestrian mall runs between Ghuznee Street and Dixon Street, allowing would-be customers superb access to its rich diversity of shops and entertainment. It’s also the road where the Bucket Fountain is to be found. 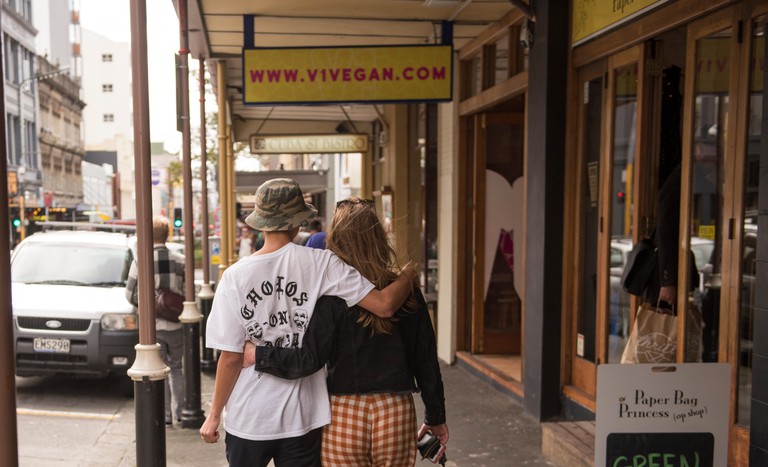 Based on 207 Cuba Street, V1 Vegan Store is at the crossroads of Vivian Street, so it’s not hard to find. This is a veggie lover’s paradise; there is something for every dedicated vegan, and its products are not limited only to food. Head here to get the best vegan-friendly vitamins and protein powders, skincare products, toothpastes, makeup and books. The store ships goods, too, and may be able to get its hands on rare items – just ask. Avoiding plastic packaging, V1 uses recycled packaging as much as possible, and the goal is to cause less suffering in the world and to improve the life of all animals – including patrons! 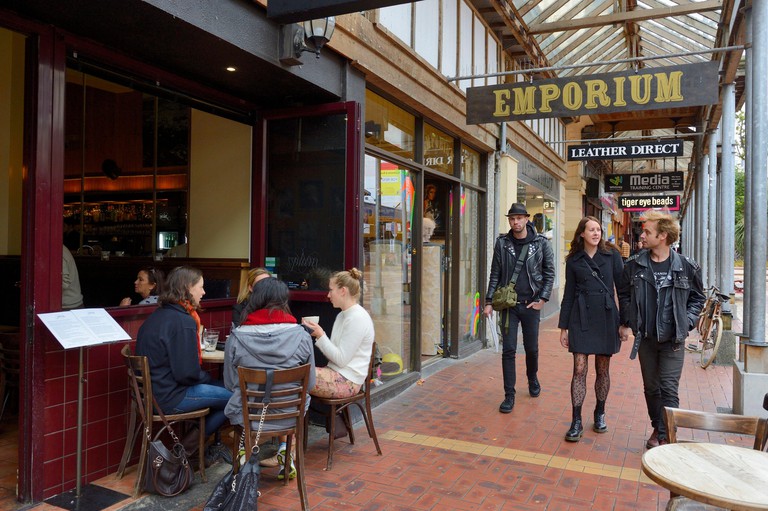 © Hemis / Alamy Stock Photo
Building on Cuba Street’s reputation for hosting some of the best retro shops in New Zealand, Emporium sells a wide range of vintage clothes at the higher end of the budget. Brands on offer include Carhartt, Nike, Calvin Klein, Ralph Lauren and Tommy Hilfiger. Emporium also sells scarves, watches, trainers and caps. Focusing mainly on American and European street wear, this is a store owned by Kiwis. Rumour has it the owners travel to California every season to search for the best in authentic vintage. Now that’s dedication. 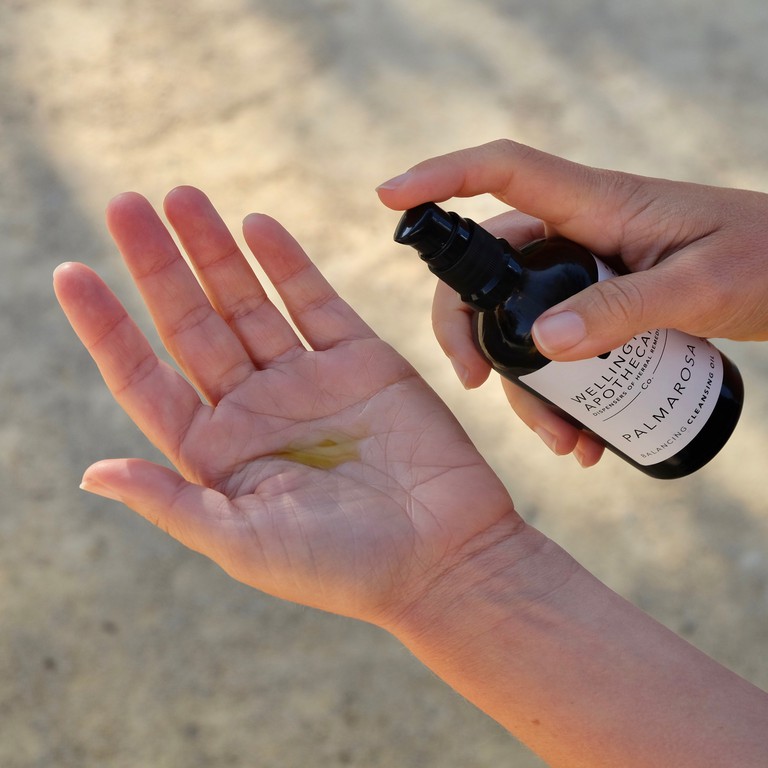 Founded in 2014 by Chantal Cropp, Jemma Scott and Lauren Jansen when they were living in a cottage in Raglan, these three herbalists have created a legendary aromatherapy haven, committed to creating a balance in health and wellbeing through sustainable products, all the while being aware of their carbon footprint and helping the environment. Their products and services include aromatherapy oils, balms, botanical skincare and soaps, as well as herbal tonics, face masks and literature. They have a clinic open on Tuesdays and Wednesdays, offering advice from qualified natural health practitioners. They are open all week, even on Sundays from 11am to 4pm.

Shop
Facebook
Email
Twitter
Pinterest
Copy link
Share
Map View
Located on 164 Cuba Street, Spacesuit has one of the best selections of cool 1990s fashion items in the country. Having been in business for more than 25 years, Spacesuit’s philosophy is keeping the locals decked out in awesome clothes at great prices, along with exceptional customer service. There are too many brands for sale to mention them all, but fans of Puma, Fila, Ellesse, Kappa, Converse and Adidas will have a field day browsing through the store. Buy-one-get-one-free sales are also available – check with the store for details. 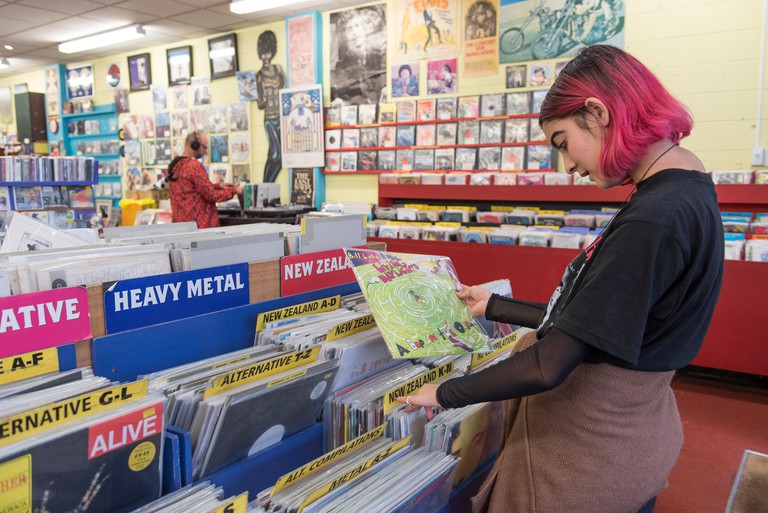 Some say this is New Zealand’s longest-running record shop, and who are we to argue? That in itself is a legitimate reason to pay a visit to Slow Boat Records, which has a cult following. Established in 1985, it has amassed an eclectic selection of vinyls, LPs, CDs, T-shirts, posters and DVDs for folks of all musical tastes, from hip hop to soul, funk to punk, NZ local to jazz, to reggae. Head down to 183 Cuba Street and grab a rarity, a bargain, or just peruse the racks to pass the time.

With five stores throughout New Zealand, Paper Bag Princess has something for everyone, from trousers and boots to shirts and shoes. Bargain hunters flock to 209 Cuba Street in abundance, taking advantage of the fabulous deals and funky retro chic designs. Denim-lovers are particularly drawn to Paper Bag Princess, which shares its name with a much-loved 1980 children’s book featuring a princess, a prince and a dragon. 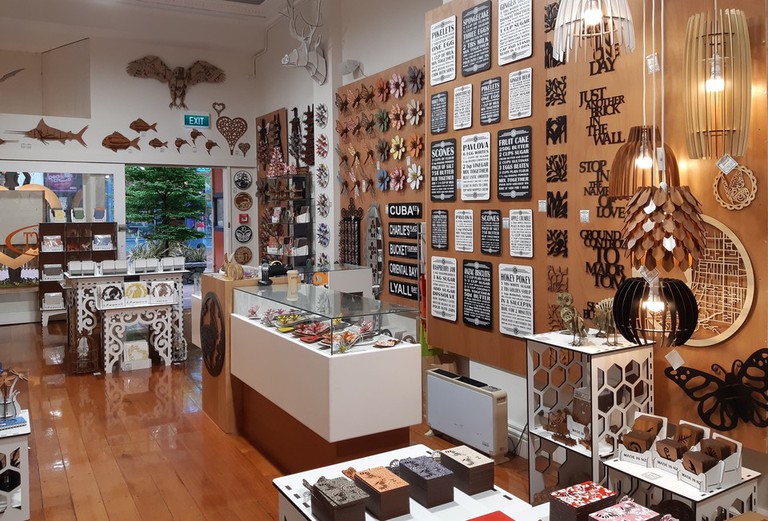 Moving house, in need of a unique present or simply want to buy a quirky household item? Abstract Designs is the place to go. Based at number 125 in the Cuban Mall, the shop was established in 1992 by Chris and Jane Baxter, and everything in the shop is lovingly made by Chris – including the display units. There is a wealth of handmade designs to choose from, including New Zealand native animals, Christmas decorations, lampshades and clocks. Fans of quirky designs will absolutely love Abstract Designs. Proudly 100% Kiwi inspired, Abstract Designs is Wellington’s go-to place for memorable laser-cut crafts.

Grab great clothes at better prices at Cotton On, based in the Cuban Mall. We’ve included this chain shop to separate the fantastic retro clothes shops on Cuba Street with the more traditional clothing that the street has to offer. At Cotton On, customary men’s, women’s and children’s clothes mingle with home furnishings and stationery items, and there are novelty film-themed gifts on offer, too.

The cute name perfectly matches the interiors, which is crammed full of goodies. Based on 225 Cuba Street, Madame Fancy Pants sells clothes for men, women and children, together with funky accessories and novelty gifts including toys, jewellery, books and cards. Owner Claire Terry has moved a bit before settling down here; she started the shop in July 2006 on Plimmers Steps before moving to 217 Cuba Street the year after. Business grew, so she moved up a few doors to the current 225, where she plies her trade serving stylish shoppers in Wellington with all sorts of beautiful products. Her necklaces and bracelets are worth the trip alone.

Thought this is technically a studio rather than a shop, Flesh Wound does sell jewellery, so we’re including it because of its formidable reputation. Regulars are rarely wrong, and Flesh Wound certainly has lots of loyal devotees. They take safety and hygiene very seriously, and insist on ID; parental consent is required for those aged under 16 and the full range of piercings is available for those aged over 18 only. Founded by piercing and body modification fanatic Hamish Robertson Halley in 1995 in Horowhenua, Flesh Wound reopened on 253 Cuba Street in 2015 and provides outstanding service from established staff.