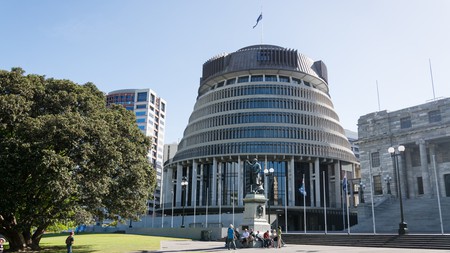 The home of politics in NZ | © Christoph Strässler / Flickr

New Zealand is full of wonders. It has landscapes and natural features that will knock your socks clean off. Mountainous vistas that will stun you into silence, or have you spontaneously applauding. Wellington though, is home to one of the quirkiest parliamentary buildings anywhere in the world – the Beehive.

What is the Beehive?

The beehive is the largest bee-farming operation in New Zealand or Australia. It produces over 90 tonnes of honey every week, and it’s said, when the wind is blowing in the right direction, that you can hear the buzzing and droning of the worker bees all the way from Picton in the South Island. There are 15 separate queens, each the size of a rugby ball.

Ah, if only that were true. It’s not of course – and what a shame that is. What a tourist attraction that would be!

The real explanation as to what the Beehive is, is a bit more mundane – although still important. It is actually the popular name for the Executive Wing of the parliamentary complex, a name given to it because of the building’s shape. This is where the Prime Minister and Cabinet Ministers have offices, and where the Cabinet meets. 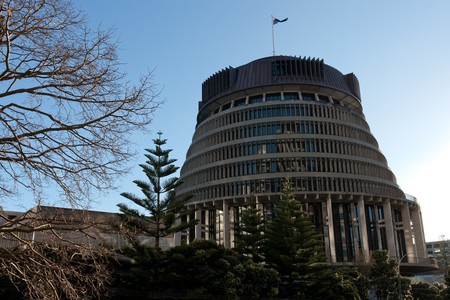 Who designed this quirky structure?

The Beehive is 72-metres tall. It has 10 floors above ground and four floors below. It is connected to Bowen House, where many members of Parliament and Ministers have offices, by an underground walkway that runs underneath Bowen Street. Although it was mostly the Government Architect of the Ministry of Works who designed the building, as it was slowly constructed over a decade, it was a single British chap who put forward the original design for what would turn out to be one of the most recognisable buildings in the entire country. 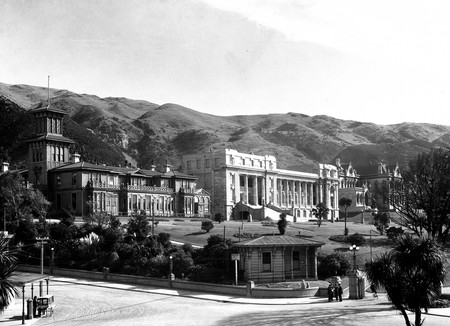 Around 1928, long before Government House was neighbour to the Beehive | © Archives New Zealand / Flickr

Sir Basil Spence, a British architect, designed a concept for the Beehive during a visit to Wellington in 1964. In his concept, rooms and offices radiated from a central core. An interesting fact about this imposing building is that the brown roof is constructed from 20 tonnes of hand-welted and seamed copper.

The main areas of the Beehive

There are numerous offices and meeting rooms and all the other facilities you would expect in any large Government building in the Beehive – including a theatrette, gym and swimming pool. There are three main areas though, that are especially important in this one of a kind piece of architecture.

The airy double-storey space features wall panels of New Zealand grown macrocarpa, Takaka marble clad columns, a backlit translucent onyx wall at one end, and opaque glazed walls at the opposite end. The core of the building is decorated with marble floors, stainless steel mesh wall panels, and a translucent glass ceiling. This is the impressive starting point to all guided tours of the parliamentary buildings.

The Banquet Hall, on the first floor of the Beehive, is the largest function room in the parliamentary complex. Guests reach the Banquet Hall entrance from an open marble staircase with bronze balustrades that lead from the ground floor foyer.

This is the part of the Beehive that would plan the main role in any disaster movie – probably starring Gerard Butler or, more fittingly, Karl Urban. The National Crisis Management Centre, in the Beehive basement, is the Government’s command centre in the event of a major emergency or security threat. The Centre includes kitchens, bunkrooms, and other facilities so that people can support themselves to live and work here for extended periods of time.

So, if you ever get the chance to take a tour make sure you do. This building is just as impressive on the inside as it is on the outside.