The 10 Most Beautiful Bridges in New Zealand 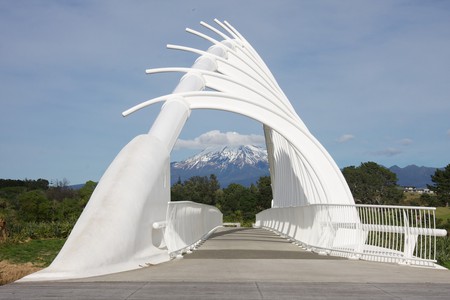 The bridge is sometimes a slightly overlooked structure. Sure, it’s handy. It can span a stretch of water or a deep drop and can save you a heap of time. They are very functional things. However, just because they serve a purpose doesn’t mean they can’t be beautiful.

They should be. Because when you get down to it they’re the physical representation of the link between where you’ve been and where you’re heading. Here’s our top 10 most beautiful bridges in NZ.

The Bridge to Nowhere, Whanganui

It’s hard to sell this bridge without getting Hollywood on the description! When you set foot on the start of this bridge it’s impossible not to be transported into an Indiana Jones / Harrison Ford-esque frame of mind. It’s such a cinematic, beautiful bit of architecture that it’s almost impossible not to get suckered in and imagine there’s a bunch of bad guys chasing you down the causeway, soon to be followed by a giant boulder. 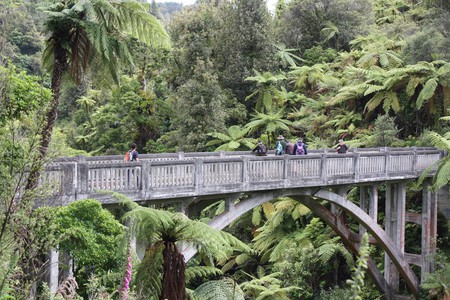 The cinematic Bridge to Nowhere | © Department of Conservation / Flickr

Take a peak at these stunning swing bridges. In true kiwi style they span a track that meanders through stunning forest, across rivers and beside alpine vistas before finishing up at the some of most incredible hot pools in NZ. It’s part of the country that is still very much wild, so if you want a properly rugged experience that will leave a lasting impression on you, then make your way to the West Coast and cross a bridge or three. 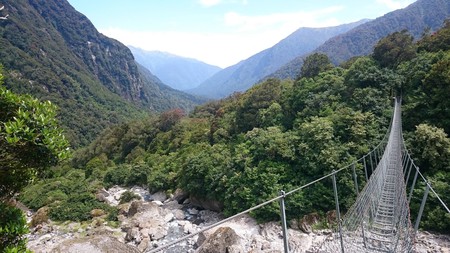 If you get the chance to walk, run or cycle down the Taranaki foreshore and end up at this bridge, then you’re a lucky person. Te Rewa Rewa bridge is probably our favourite bridge on the list when it comes to modern aesthetics. Seen from one end, this thoughtfully constructed bridge acts as a perfect frame for Mount Taranaki in the distance. The design itself is actually modeled off the rib-cage of a whale, and you can’t help but think of a breaking wave curling over – very apt in a place that has some topnotch surf spots. 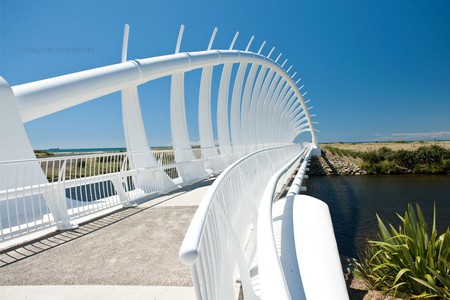 The Kawarau Bungy Bridge is the original bungy bridge. The home of bungy, if you will, where AJ Hackett set up the first commercial bungy jumping operation in the world. The bridge stands 43m above the river below and offers some spectacular views of the gorge. Obviously, the best way to experience this bridge is to throw yourself off it and see it from multiple angles as you bounce around, so head down to Queenstown. They don’t call it the Adventure Capital of New Zealand for nothing.

A short walk from the Haast Highway, in Mount Aspiring National Park are the Blue Pools, a dazzling spot with some of the bluest water the world has to offer. It’s so clear that from the bridge you can often see New Zealand’s famous brown and rainbow trout migrating upstream. Not only do you get to witness (hopefully) some intriguing NZ wildlife, but you’ll get to see an example of some top quality Kiwi architecture and ingenuity.

If you’re after a little taste of New Zealand’s history and a bygone era, then the Edith Cavell Bridge that spans the Shotover River should be added to your sightseeing list immediately. It’s listed by the New Zealand Historic Places and was originally built to help ease the passage of gold miners in the region. One old miner, Jack (John) Clark, who lived in a sod hut overlooking the bridge, took it upon himself to name it “The Edith Cavell Bridge” in honour of the famous nurse, who had been executed during the First World War for helping wounded Allied soldiers escape from occupied Belgium. 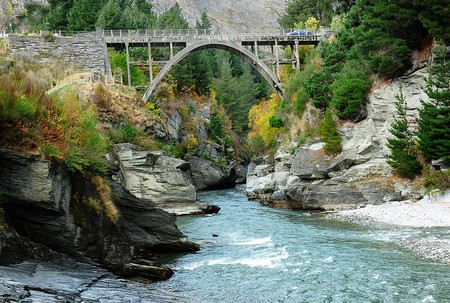 The Arapuni Swing Bridge is part of the Waikato River Trails – a great excursion for walkers and cyclists – making it an ideal point to stop and take in the dramatic view if you’re out and about. At 152m long it’s an impressive bit of engineering in itself and the fact that construction started in May 1925 and finished sometime in April 1926 makes it even more so. This is another little piece of NZ history and is listed as a Category 2 by Heritage New Zealand.

This is an absolute classic when it comes to New Zealand and its bridges. Sure it doesn’t have the grandeur of Sydney’s Harbour Bridge, but it’s still quite a sight. What makes this a particularly great bridge is the fact you can take a tour with a guide and climb the thing. This gives you some sensational views across the Auckland skyline, and also builds up the appetite so you’ll be more than ready for a bite to eat at one of nearby Britomart’s fantastic restaurants, bars or cafes.

Use this swing bridge to cross the breathtaking milky blue waters of the Hokitika Gorge. There are few places in the world, when it comes to running water, quite as mesmerizing as the river water here. There’s something about the place that makes it feel more like the set of a movie than a natural setting. For those who are that way inclined, this bridge offers more than just sublime views. You can also launch yourself off it via bungy and take a closer look at the water that way. 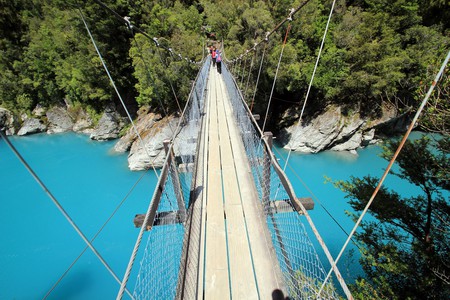 The Hauraki Rail Trail is one of the easiest and most scenic cycle trails in New Zealand, with the 160km trail made up of five sections allowing for a comfortable three to four-day cycle ride. You’ll cross plenty of now unused railway bridges riding this trail, and get to see a decent stretch of a lovely part of the country. The Hauraki Rail Trail follows the path of two historic railway lines, running from Miranda to Thames, Thames to Paeroa and Waihi to Te Aroha. Importantly, there are also plenty of pubs and cafes along the way so that you can keep the batteries fully charged.