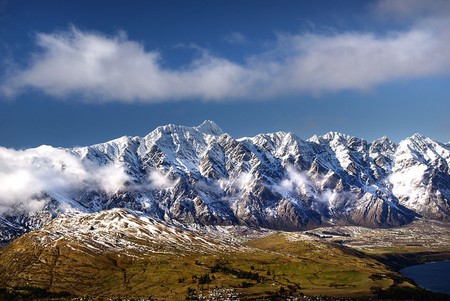 New Zealand is home to some of the most arresting mountain ranges on the planet, not just in the South Island but in the North Island as well. Those snow-covered ranges served as the stomping grounds of some of New Zealand’s best competitors. The crop of successful winter athletes that this landscape has produced isn’t just limited to skiers and snowboarders though (although the majority are). New Zealand also has ice skaters and skeleton racers that have done well on the world stage.

Goofy-footed Prior was born in Devon, England, but hails from Auckland. She’s a blast to watch as she loves to get inverted, busting out moves like a switch rodeo to backflip. She also happens to be one of the few women to land a double wildcat. She competed for New Zealand in the 2014 Winter Olympics held in Russia. Most recently and notably she won the bronze medal in the 2015 Winter X Games in Aspen, as well as the gold medal at the Burton European Open for slopestyle.

Byron Wells is clearly a man who likes to spend as little time with his feet on the deck as possible. When the halfpipe master isn’t flinging himself through the air, performing his signature tight execution tricks, he’s behind the controls of helicopters. After a disastrous training accident mere days before he was due to compete in the 2014 Winter Olympics – which resulted in him having to pull out of his event – Wells came back to post excellent results in competitions. He notched wins at the Aspen Open halfpipe in 2015 and 2016, bronze at the Canadian Open halfpipe, bronze in slopestyle at the Rev Tour and bronze in halfpipe at the AFP World Tour finals.

Queenstown local Adam Barwood made his way up to ski-racing professionalism the natural way. From a school training camp in 2001 where he first learned to ski, to extra training over the weekends and spending his whole winter up in the mountains. His backyard mountain-wise is Coronet Peak, but the 25-year-old also knows Cardrona and Treble Cone intimately. As a pro, it sounds like quite a life. Spending southern winters at his home stomping ground before jetting up to North America, Canada and Europe for more training in the Northern Hemisphere winter. Barwood lives every ski-bum’s dream.

Janina ‘G’ Kuzma has had a nomadic childhood. She hopped around the world, residing in Papa New Guinea, Borneo and Australia, before recently settling down in beautiful Wanaka, New Zealand. She’s been lucky enough to have grown up and learned the ropes in Fernie, British Columbia, a ski-town known for its shredders. She’s a magnificently diverse skier, as at home on the halfpipe as she is careening down the face of a mountain. Speaking of halfpipe, Kuzma placed fifth in the halfpipe in the 2014 Winter Olympics, and has been recently selected to represent NZ again in 2018 in PyeongChang.

Another one of the four Wells brothers who are all competitive freestyle skiers, Jossi is another athlete on our list who represented Team New Zealand at the Winter Olympics in Sochi, Russia in 2014. Perhaps most notably, in a career full of notable achievements, he is one of only four winter athletes to have won medals in three separate X Games disciplines: a SuperPipe 2010 silver medal, a Big Air bronze in 2012, and Slopestyle silver in 2008 and Tignes 2013, as well as a gold in Aspen 2016. His two other brothers, Beau-James and Byron have also competed in the X Games. What a family!

From the mountain to the frozen water of the ice rink, speed skater Shane Dobbin, 37, has competed in two Winter Olympics, first in Vancouver in 2010 and then in Sochi four years ago. He finished 17th and 14th, respectively, in the 5000m event, and was selected to carry the New Zealand flag at the Russian games. He also came seventh at the 10000m event in Sochi 2014. After deciding to retire, Dobbin has now elected to return to skating and is vying for a spot on the 2018 Olympic team.

The third Wells brother on our list is Beau-James. His accolades include second place in the Dew Tour halfpipe 2015, 2014 & 2015 Freeski Halfpipe Junior World Champion, and 6th in halfpipe at 2014 Olympic Winter Games. This is the result of first hitting the slopes when you’re three, perhaps. Another potential contributing factor could be having three other brothers that are competitive freestyle skiers and X Games medalists in their own right.

Coberger came from a family of skiing pioneers. Her grandfather established one of the first ski equipment companies in New Zealand. This close affinity with all things skiing might explain why Coberger went on to accomplish all that she did. In a nutshell, she was a lady of firsts. She was the first New Zealander to win a medal at the World Junior Championship when she took a bronze medal in the slalom in 1990. She then followed up this great achievement with a silver medal in the Winter Olympics 1992. This brilliant feat earned her the prestigious honour of being the first athlete from the Southern Hemisphere to ever win a Winter Olympic medal.

Rebecca ‘Possum’ Torr is living proof that you don’t need to live by a mountain to conquer one. The 27-year-old snowboarder was born in Tauranga, New Zealand, on the east coast of the North Island. It’s a place famed more for its surf than its snow – the nearest ski resort being Turoa and Whakapapa ski-fields in the middle of the North Island, about three-and-a-half hours away. This slight handicap hasn’t impeded Torr’s rise to the top of her field. She is another athlete on our list who made the cut and represented New Zealand on the world stage in the 2014 Winter Olympics.

It could be said that Rotorua native Ben Sandford’s ability when it comes to the skeleton was in his blood. His highest placed finish for the sport in the FIBT World Championships was third, making him only the second person from the Southern Hemispere to win a medal at the championships. The other person? His uncle, Bruce Sandford, who won gold in the same event in Calgary in 1992. Ben also competed in two Winter Olympics in 2006 and 2010, coming 10th and 11th.