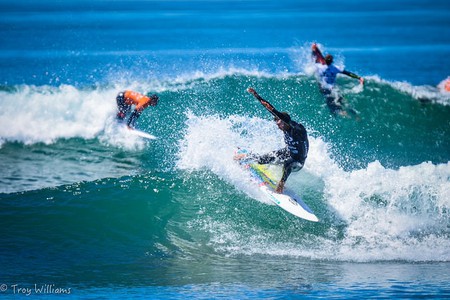 The New Zealand lifestyle and surf culture are a match made in heaven. Laid back people engaging in a sport in which the mantra is all about leaving your worries at the water’s edge. So it’s unsurprising that New Zealand has churned out a few athletes that know what to do when a beautiful set comes in. Here is a list of Culture Trip’s most accomplished and legendary surfers from the Land of the Long White Cloud.

We start off here with the young gun, Taylor Hutchison. This up and comer is going to be one to watch in the future for sure. In April 2017 he won the Premier Under 20s Boys Division at the Backdoor GromBash for the third year in a row. Clearly this guy knows his stuff. He was born and raised in Raglan, one of – if not the – best and famous surf breaks in the country. Having surfed here for practically his whole life, natural-footed Hutchison has developed a ripper of a backhand! He’s already managed to cement a place in the New Zealand Surf Team.

Just missing out on the recent National Surf Championship that was held in Gisborne, Elliot Paerata-Reid is known as one of New Zealand’s best surfers. After all, you have to be pretty good to be in contention with the estimable Ricardo Christie. As a youngster Paerata-Reid showed his metal when he was attacked by a thresher shark. Instead of losing it, he kicked the shark in the head, paddled into shore and went off and got eight stitches. A little after he was back on his board. He’s only twenty, but is already competing in the World Surf League’s Qualifying Series. Watch this space.

There’s not a lot you can say about Maz Quinn. That’s to say, there’s plenty you can say about the guy, but all you really need to know about him is that he is a bonafide New Zealand surf legend. Things could have been very different for Quinn, as he was actually born in Hamilton, which is basically in the middle of the North Island and as far from any coast as it is possible to be. Luckily, when he was two, his parents moved to Gisborne. In a nutshell, in 1999 Quinn became the first Kiwi to win an event in the World Qualifying Series. This first was then eclipsed by another in 2001 when he became the first New Zealander ever to qualify for the elite World Championship Tour. He retired from international competition in 2009, and then from domestic in 2017. However, he cheekily popped back in the competitive rash-vest when he found out the National Surf Championship was being held in his home town of Gisborne. In typical fashion he took out the Over 40s Division.

Ella Williams is another young woman who caught the surf-bug early on. She hopped onto a foam board when she was about four years old and from then on knew that that’s what she wanted to spend her life doing. When she was six she even went so far as to paint ‘I’m Going To Be A World Champion Surfer’ on her bedroom wall so that she’d see it every night and every morning. Since then she has come a long way, and shows just what you can do with a lot of perseverance and dedication. Ella is the winner of New Zealand National titles across all age divisions at a junior level and currently ranked 29th on the World Surf League (WSL) Open Womens Qualifying Series.

Luke Cederman is perhaps one of the most well-known characters in the New Zealand surfing community. He is a a pro himself, although has never reached the same heights as the likes of Maz Quinn and Ricardo Christie. He’s a man who epitomizes the surfing dream; born in Raglan and makes yearly trips to Bali when he isn’t competing where, by his own admission, all he does is eat, sleep and surf. He’s best known for his antics out of the water though. Among other things he has applied sarcastically to be a contestant on The Bachelor TV dating program in NZ, started a KickStarter campaign to pay his way into the World Tour and made a scathing video in which he took the mick out of Kelly Slater and an outrageous suggestion he made about culling sharks in Australia.

Paige Hareb is another surfer on our list who has achieved a first when it comes to surfing. She was the first woman to secure a spot on the ASP Women’s World Tour. Not bad for someone hailing from the tiny beach town of Oakura in Taranaki. She’s had some epic battles over the years, beating the world number two on her debut in Hawaii in 2008, only to lose to the world champion at the time, Stephanie Gilmore in her next heat. The next year she was again beaten by Gilmore in the semi-finals of the Roxy Pro in Coolangatta, Australia. She’s been a role-model for a lot of young women in New Zealand, and has been previously recognised as Taranaki‘s Sportsperson of the Year.

Talk about starting off with a hiss and a roar. Billy Stairmand made his name in the most epic fashion possible for a surfer, namely, taking out The King – 11 time world champ Kelly Slater – back when he was a young unknown! Billy is another Raglan local, and it won’t shock anyone if he makes it into the World Tour very, very soon. Technically, he’s a bit of a wizard when it comes to aerial manouvres, and for a smaller bloke he cranks out some powerful moves.

Ricardo Christie is another New Zealand surfer who has recently won at the Health 2000 National Surfing Championships. He clinched the Open Men’s Division in Gisborne, and as a Hawkes Bay local you imagine it must have been sweet. He’s a stylish surfer, and shows a lot of flair when it comes to riding above the lip. He’s also a bit of a beast when it comes to his rail game, and when the waves are clean and good he’s a blast to watch. Unfortunately he was knocked out of the Van’s World Cup in Hawaii, which means he will miss out on the 2018 World Surf League Championship Tour.

Raiha Ensor is still a teenager, but already she is carving up the waves and carving herself a place as a Kiwi surfer for the ages. Recently, she just won the Health 2000 National Surfing Competition in Gisborne, in the Women’s Open Division. It shouldn’t come as a surprise really, not since she tried to stand on her boogie board when she was seven. Her dad quickly switched her to a surfboard, and that was that. This talented surfer has ripped up waves in New Zealand and Australia, but has also surfed breaks in Portugal, Brazil and Costa Rica. In her already crazily impressive career she has competed as the youngest woman in the New Zealand team, and first represented her country as a fifteen year old in California.