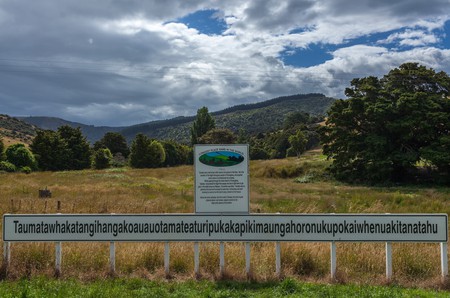 New Zealand is famous for many things, such as the All Blacks sports franchise, and the Oscar record-breaking Lord of the Rings movies. It is also home to the longest place-name on the planet, as our guide reveals.

What is the longest place-name in the world?

Without beating around the bush, here it is:

Now, if you think you can say that with perfect diction straight out of the box you’re either the most Kiwi of Kiwis, delusional or have so much confidence that you better be careful you don’t hurt yourself with it.

What is it, exactly?

And that’s the thing, isn’t it? At a glance you wouldn’t have the foggiest notion as to what it is. Is it a town, village or a collection of picturesque pools? In fact it is a 305m high hill located in the beautiful North Island region of Hawkes Bay.

You can find the hill by driving south from Waipukurau for about 55 kilometres, turn right onto Wimbledon Road. A sign displaying the name is situated about five kilometres along this road. It’s a great photo opportunity. The actual place is on private land, so permission is required before you can walk to it.

If you want to hear how it should be pronounced then watch the video below. It’s a real humdinger pronunciation-wise and is stuffed with 40 syllables! Here’s how to say it, if you want to give it a crack: Tau-ma-ta-wha-ka-ta-ngi-ha-nga-ko-au-au-o-ta-ma-te-a-tu-ri-pu-ka-ka-pi-ki-mau-nga-ho-ro-nu-ku-po-kai-whe-nu-a-ki-ta-na-ta-hu.

What does it mean?

Obviously, this is a name of Maori origin, and it translates to the following:

“The summit where Tamatea, the man with the big knees, the slider, climber of mountains, the land-swallower who travelled about, played his nose flute to his loved one”.

The story behind this tongue-baffler

With a name of such epic length you would be expecting a poignant and interesting story to go with it. There is one handed down in Maori legend and tells us how this particular hill in the Hawkes Bay got its name.

Tamatea was a famous chief and warrior. One day, while travelling through the back of Porangahau, he encountered another tribe and had to fight them to get past.

During the fight his brother was killed. Tamatea was so grieved over the loss of his brother that he stayed at the battle site for some days. Each morning he would sit on the hill and play a lament on what is called the koauau or Maori flute, which can be played with either the mouth or the nose. 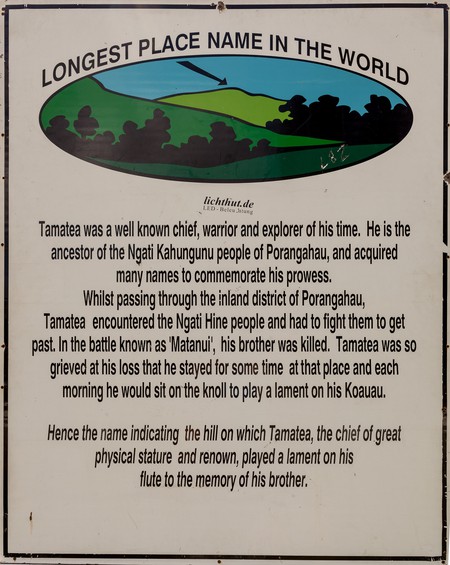 Obviously, this fable is steeped in misery and sadness and excitement. It also begs the question, what is a nose-flute? Well, here is a video of a man playing the nose-flute for those who are interested in seeing this instrument played.