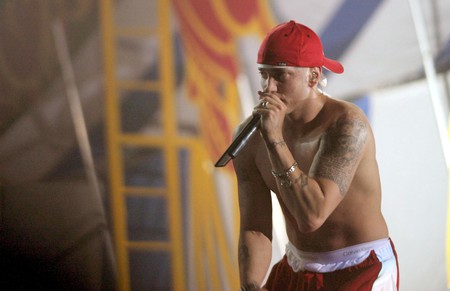 Eminem is suing New Zealand’s National Party for allegedly using his track ‘Lose Yourself’ in an election campaign.

The US rapper has filed a lawsuit against the National Party accusing them of using an unlicensed version of his hit song in an election campaign ad.

Eight-Mile Style, a publishing group representing Eminem, is seeking damages for copyright infringement of the 2002 track, which featured on the soundtrack to the movie 8 Mile.

A lawyer for the group described ‘Lose Yourself’ as ‘iconic’ and claimed it was ‘without doubt the jewel in the crown of Eminem’s musical work’.

The commercial for John Key’s re-election as Prime Minister featured instrumental music that allegedly resembled the beat of ‘Lose Yourself’.

The National Party said the track used, called ‘Eminem-esque’, had been bought from the Australian production music library Beatbox Music and was used by others without complaint.

The composer of the opening guitar riff for the track said the soundtrack was a ‘blatant rip-off’.

Jeff Bass told the High Court in Wellington that the commercial’s song, ‘doesn’t taste so good, though’.

The judge-only trial is set to continue for six days.