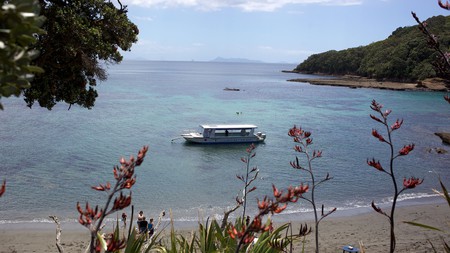 For visitors to Auckland who are looking to escape the city, the Goat Island Marine Reserve is an easy, scenic and educational day trip for the whole family. While spanning only 5.3sqkm, the Southern Hemisphere’s first ever marine reserve boasts incredible sea life, including giant ancient snapper, majestic stingrays, mottled carpet-sharks, bright-orange lobsters and schools of iridescent blue maomao fish.

“The whole thing is really a microcosm of how a functioning ecosystem should look,” says Tim Haggitt, a marine ecologist and manager of the Goat Island Marine Discovery Centre. “You’re getting something as close to natural as we can get.” Take a deep dive – or a leisurely wade – into New Zealand’s coastal waters at their best with our visitors’ guide.

A brief history of the Goat Island Marine Reserve

In the early 1970s, the underwater environment at Goat Island looked very different. Overfishing had set the food chain off kilter, and kina (sea urchin) populations had exploded as a result, munching most of the seaweed off the seafloor and preventing other life forms from thriving: the place became what’s known as a ‘kina desert.’

It’s a pattern that has played out across many of New Zealand’s coastal ecosystems. But at Goat Island, it was being watched with concern. On the hilltop overlooking the island sits a University of Auckland marine laboratory, which has operated there since 1965. For over a decade the laboratory’s first director, marine biologist Bill Ballantine, pushed to turn the area into a marine reserve, and finally succeeded in 1975. “It’s really a credit to his pioneering attitude,” says Haggitt. “Imagine having an idea for that long, and being so dogged just to get it across the line.”

Since then, biodiversity in the reserve has blossomed. Most local fishers have found that the reserve actually benefits their business too: it acts as a nursery for smaller fish, many of which then travel beyond the reserve’s boundaries. “And when you look at what that 5.3sqkm of coastline has taught NZ about how the marine environment functions – or doesn’t function – it’s hugely significant in the scientific world as well,” says Haggitt. “It straddles such a broad spectrum of values and experiences: it’s really one of the world’s gems.”

How to get to Goat Island Marine Reserve

The drive to Goat Island takes about an hour from central Auckland; non-drivers can catch an Intercity bus to Warkworth and book a shuttle from there. It’s worth picking up a coffee or snack from local bakery Leigh Eats (which also does great fish and chips) or the famous Leigh Sawmill Café, which also serves delicious wood-fired pizzas and often stages live music in the evening (check the gig guide).

Just up the road from the Sawmill Café, snorkels and dive gear can be hired from Goat Island Dive and Snorkel, which also offers PADI-certified open water dive training and snorkelling tours. There may also be an opportunity to hire gear on the beach itself. For those hoping to spend a bit longer in the area, there’s a campground on the cliffs just above Goat Island Beach, and some nice accommodation options at the Sawmill Café, too.

There’s plenty to see underwater without having to swim far. Set off from the beach and cruise around the rocky reefs looking out for blue maomao, red moki, bright parrotfish and many other striking species. Stronger, more confident swimmers can venture out to Motu Hāwere (known in English as Goat Island, after which the reserve is named), which sits just 100m off the beach, and explore its reefs and caves – however the island itself is a nature reserve, and so no landing is permitted. The currents between the island and the mainland can be powerful, and may pull weaker swimmers off course.

The fish in the reserve are used to having humans around (and not being hunted by them), so they don’t tend to swim away as quickly as they might in other areas. “Seeing them up so close is really special,” says Haggitt. It might be tempting to share your lunch with them, too, but it’s forbidden as it changes their behaviour. Because the area is a ‘no-take’ marine reserve, it’s important not to disturb or take home anything – even a shell from the beach, which might otherwise have a future role as a home for a hermit crab.

For those who’d rather not brave the water, the Glass Bottom Boat tour provides a great opportunity to see lots of sea life up close over the course of 45 minutes, with the help of a skilled guide. Visitors can hop aboard straight from the beach, so it’s accessible in any weather. The company also hires out kayaks and snorkel gear on a seasonal basis.

The Goat Island Marine Discovery Centre sits a short walk up the rise beyond the beach. Based at the marine laboratory, it’s a place for educational groups and the general public to “put a scientific slant on whatever they might have been interacting with or seeing in the reserve itself,” says Haggitt. There are lots of interactive displays including bigeye microscopes, aquariums and a touch tank. The marine-organisms-in-residence are forever changing: “It could be anything: lobster, reef fish, octopus, carpet sharks or invasive species,” says Haggitt. “We try to mix it up all the time.”

There’s a small cover charge to visit the centre and proceeds go towards keeping it running. Kids under four go free. It’s open seven days a week during the summer months (1 December to 30 April) and open on weekends throughout the year and by booking outside of those times too. “Basically, we want to share how awesome marine science is, and inspire the next generation,” he says.