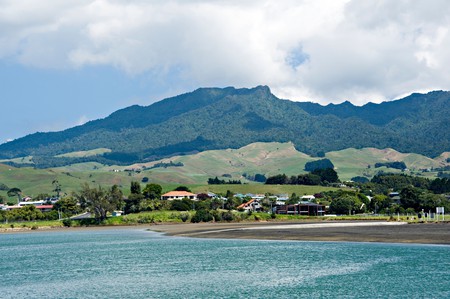 There are many routes, some easier than others, to the summit of Mount Karioi in North Island | © idp new zealand collection / Alamy Stock Photo

The steep green slopes of volcanic Mount Karioi loom large on the long road to Raglan. From the artsy, café-rich town, home to world-class surf breaks, the mountain’s iconic silhouette is ever-present in this west-coast outpost. Learn the best ways to explore its wonders in this handy Culture Trip guide.

In local Māori legend, Karioi and neighbouring mountain Pirongia were sisters, and Karewa (a nearby volcanic island) was Karioi’s lover. But Pirongia and Karewa fell in love, and when Karioi found out, she tossed Karewa out to sea, pushed Pirongia inland, and positioned herself between them to keep them apart.

The majority of the mountain is protected as a reserve today – the only one on the island’s west coast that stretches from summit to sea – and nurtured by an energetic community conservation, restoration and pest eradication outfit called the Karioi Project.

It is home to some unique biodiversity, including an endangered population of ōi (grey-faced petrel) and some astonishing blue mushrooms. While some will relish the challenge of summiting the mountain on foot or circumnavigating it by bike, there are also plenty of easier options.

For a low-effort, high-reward mission, the Te Toto Gorge lookout on the mountain’s western flank is hard to beat. The gorge is dizzyingly steep and was formed by an ancient landslide. “Karioi is significant internationally to geologists,” says Karioi Project volunteer and advocacy coordinator Bexie Towle, “because we have two different volcanic processes happening at once in the same place – and that’s what creates some of the amazing sights you can see from the lookout.”

At the foot of the gorge is a forested valley that opens only to the ocean. Remnants of centuries-old Māori settlements, including terraces, food storage pits and rows of stones outlining garden plots can still be seen in some places. Visitors are currently advised not to go into the gorge itself because it is tapu (sacred) to Māori. To get to the lookout, take Whaanga Road past Whale Bay to the Te Toto Gorge car park and walk the 50m (164ft) track to the viewing platform.

To soak up this special place for a while longer, book a stay in one of the tiny houses at Kokomea, just down the road from Te Toto. There’s a treehouse, a Love Bus with an epic outdoor bath, and a cabin – all off-grid, secluded, luxuriously appointed and designed to make the most of the views over the Tasman Sea and up the mountain.

The most scenic – and challenging – way to summit the mountain is via the Mt Karioi Track, which begins at the Te Toto Gorge car park and takes about three hours each way. There’s a lookout after about an hour, with another awesome view of the gorge, so you can stop here. Beyond this, the track gets pretty challenging – hikers must be prepared to scramble up steep slopes using the ropes and chains installed on the mountain, and in the wintertime it can be very muddy and slippery.

But the view from the summit is well worth it. “On a clear day, you can see all the way to Taranaki, Ruapehu and Ngāruahoe – three major North Island volcanoes,” says Towle, “as well as closer mountains like Maungatautari and Pirongia, the Raglan Township, the shape of our harbour and Kawhia Harbour on the other side.” Keep an ear out for the bell toll of the korimako (bellbird) and, in autumn, an eye for the sky-blue werewere-kokako mushroom, which is featured on New Zealand’s $50 note.

There’s a quicker – though less scenic – route to the summit from the other side of the mountain. “It’s an easier walk up,” says Towle, “no chains, no scrambling.” The track takes 2-3 hours each way, starting from the end of Karioi Road, which comes off Ruapuke Road. It journeys through private farmland for 40 minutes, then climbs steadily through coastal forest to the summit. Those who can sort pick-ups and drop-offs can hike the Wairake track to Mt Karioi track or vice-versa as a traverse across the entire mountain.

Skip the crowds at the Ngarunui Beach carpark and drive or bike a little further along Wainui Road to Bryant’s Reserve, a small but very important patch of coastal forest, where ōi nest along the clifftop. In April and May, the birds return to their nests to breed after months away at sea, and can be spotted flying around and calling to each other on windy nights. “They whoop, they chase each other, they circle and they swoop; it’s a pretty incredible sight and sound,” says Towle.

It takes 15 minutes to walk this track to the western, quieter end of Ngarunui Beach, and there’s a great lookout about halfway down, right near the ōi burrows. There is an alternative car park and entrance to the reserve at the end of Earles Place.

For those up for a serious challenge, the Raglan Karioi Trail race runs every year in December. “They say it’s the steepest race in New Zealand,” says Towle. It’s a gruelling 23km (14mi), 1,800m (5,906ft) ascent and descent on off-road trails, farmland and unsealed roads. There’s also a 10km (6.2mi) run or walk, a 5km (3.1mi) family run and a free barbecue and drinks provided for all competitors at the end. The event contributes funds to the Karioi Project.

Keen cyclists can sign up for the Karioi Classic, a round-the-mountain, gravel-road bike race that runs every winter. The track is 50km (31mi) long, and there’s also the option to do an 86km (53.4mi) track called the Enduro. There are cash prizes for winners, and the event also contributes to the Karioi Project. “Both of these events really show how much people love the mountain,” says Towle.