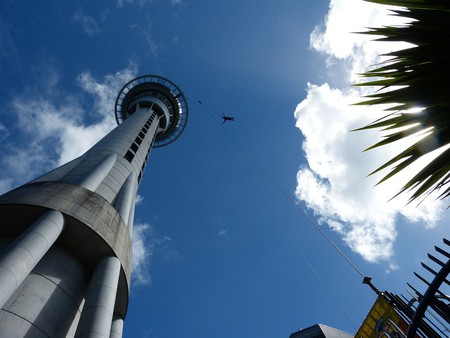 Auckland’s Sky Tower is renowned for being an adventure hub and luxurious dining establishment. It is also famous for being the Southern Hemisphere’s tallest free-standing fixture, as well as being the defining landmark of New Zealand’s biggest city. Despite only taking two years to complete, this local icon has an interesting story to tell. Here’s a brief look at this modern structure’s history.

Getting the concept right

The Sky Tower is part of the Sky City casino complex, which, at the time the tower was built, was under the ownership of Harrah’s Entertainment. Gordon Moller was the Sky Tower’s original designer and architect, working with Fletcher Construction to complete the project from 1994 to 1997.

Early concepts for the 328-metre (1076-foot) tower were much different to what the structure looks like today. Moller initially proposed an aluminium-clad fixture with a futuristic satin finish. At some point, however, the metallic concept was (for lack of a better word) scrapped. Instead, a concrete shaft with a smooth finish was chosen. While this greatly reduced building costs, the Sky Tower was still one of the largest commercial projects of its time – a total of NZ$ 69 million was spent in its construction. 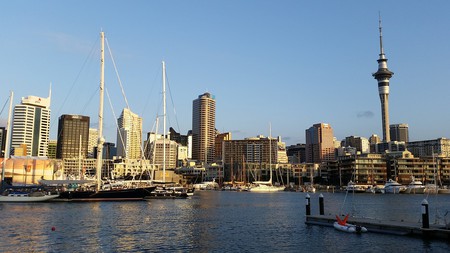 Turning the Sky Tower vision into an enduring reality

Even though the landmark was completed six months ahead of schedule, the project was not without its obstacles.

There were quite a few structural factors that needed to be taken into account. This new landmark needed to be able to withstand 200 km/h (124.3 mph) winds, resist high-magnitude earthquakes, and stand the test of times with minimal maintenance. Construction also called for devising different measures to ensure the Sky Tower was perfectly straight. Finally, the tower was to occupy an entire central-city block, a feat that seemed impossible from an outside perspective.

In the end, 15,000 cubic metres (529,720 cubic feet) of concrete, 2,000 tonnes of reinforcing steel, 260 glass panes, and 660 tonnes of structural steel were used to achieve these objectives. As for keeping the tower upright, three telemetry techniques were used: first, measurements were taken from three different points to calculate the centre point for the structure; then, vertical readings were conducted by shining up lasers from the base to the jump platform; lastly, global positioning satellites were used to confirm the tower’s final positioning.

Nowadays the tower is also considered an Auckland must-see, holding an array of tourist activities and community events — the annual Firefighter Sky Tower Stairway Challenge is among the most distinguished of the latter. Visitors flock to the Sky Tower to try their hand at bungy jumping or walking along the outer ledges, and to get a 360-degree panorama of the city. The tower is also home to three restaurants: the revolving Orbit 360, the fine-dining Sugar Club, and the more casual Sky Café. 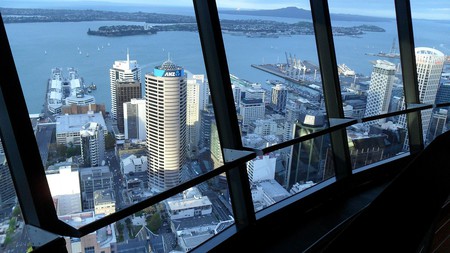 View from the Sky Tower | © Projectsnz/Pixabay
Give us feedback