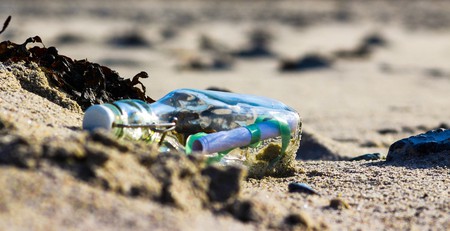 The world’s oldest message in a bottle has been discovered on a remote beach in Western Australia, after 131 years and 223 days out of human hands. A Perth couple stumbled upon the bottle near Wedge Island, about two hours’ drive north of Perth — a truly remarkable discovery, if it’s legit…

Perth residents Tonya and Kym Illman were walking through dunes in this remote corner of WA on January 21 when they spotted a well preserved bottle sitting in the sand. They originally thought there was a cigarette sitting inside before they realised it was a note, and after drying it, began the task of deciphering the hand-written German script.

Tonya and Kym believed their find was too farfetched to be real, so they reached out to the West Australian Museum for help. Assistant curator Dr Ross Anderson contacted colleagues in Europe — including German agencies the National Meteorological Service of the Federal Republic of Germany and the German Maritime and Hydrographic Agency — to confirm the bottle’s authenticity.

The boffins figured out the message was dated June 12 1886, originating from the German ship Paula. The Dutch gin bottle was carrying a meteorological journal tracing the vessel’s journey all those years ago, when sailors were in the habit of throwing hundreds of bottles overboard to track ocean currents.

This shot of our bottle has appeared in just above every country in the world and certainly on many of the most read websites on earth, but it was a tricky one to take! #messageinabottle #oldestmessageinabottle pic.twitter.com/LbPCHMrDEt

“This has been the most remarkable event in my life,” Tonya Illman said on her husband Kym’s website, where you can view more photos of the incredible find. “To think that this bottle has not been touched for nearly 132 years and is in perfect condition, despite the elements, beggars belief. I’m still shaking.”

The world’s media has gone gaga for the story, making headlines on the BBC, Time Magazine, and CNN.

Oldest message in a bottle found on beach in Western Australia

Could it be a hoax?

Media agencies have also questioned the veracity of a find — not only because of how remarkably rare and well preserved it is, but also the identity of its discoverers. Kym Illman is the founder and managing director of Messages on Hold, a Perth company famous for its ambush marketing tactics … so who better to discover (and publicise) the world’s oldest ‘message on hold’?

When Culture Trip asked Kym Illman whether this is all a sophisticated marketing stunt, he replied: “If it is, I’ve pulled off the most elaborate ambush the world’s ever seen. And while I’m good, I’m not that good to have roped in [witnesses], two national German agencies and the WA Museum.”

The Illman family have loaned the world’s oldest message in a bottle to the WA Museum for the next two years, and it is already on public display.