Where To See Wallabies in Australia 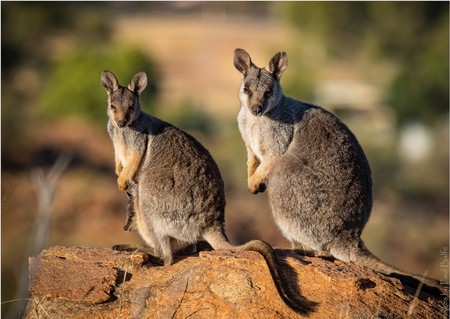 Wallabies are smaller than kangaroos, although the marsupials look similar. There are 30 different wallaby species found across Australia and in Papua New Guinea. A lot of their names are derived from their habitats, including rock-wallabies and swamp wallabies. Here are some of the best places to spot them across Australia.

Over half of this island off the north Queensland coast is protected as part of Magnetic Island National Park. This means there are plenty of animals calling Magnetic Island home, including kangaroos, koalas, and wallabies. The island is home to 23 bays, and there’s a substantial inquisitive population of rock-wallabies living in the rocks at Geoffrey Bay. Visitors can pick up food to hand feed them at the local service station, but they also don’t mind nibbling on carrots. 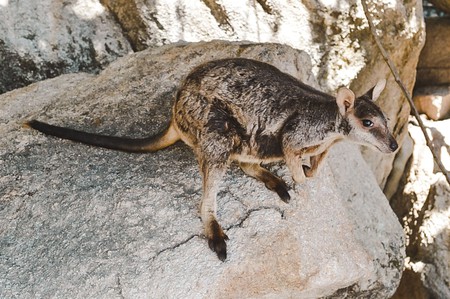 Cape Range National Park is located adjacent to Ningaloo Marine Park, which is known for its whale shark population. On dry land, Cape Range National Park is 50,581 hectares of limestone cliffs, beaches, canyons, gorges, and over 700 caves. This is the perfect home for black-footed rock-wallabies, which are just one of the animals that can be spotted. It’s also home to emus, echidnas, lizards, kangaroos, and dingoes.

Tasmania is a wildlife watcher’s paradise. In Freycinet National Park, expect to find many Bennett’s wallabies, which are also known as red-necked wallabies. They can usually be spotted feeding on grass in the afternoon and at dusk. The wallabies like to congregate at the national park’s campsites and picnic areas. However, Parks Tasmania warns against feeding them, as unnatural products can cause them to develop a fatal disease called “lumpy jaw.” A similar-looking creature that can be spotted at night is the Tasmanian pademelon. 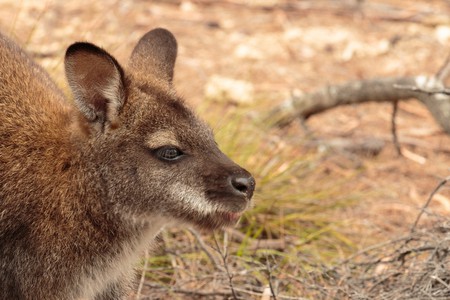 Up close to a wallaby at Freycinet National Park | © a_terracini / Flickr

Located an hour southwest of Darwin in the Northern Territory, Litchfield National Park has over 260,000 visitors annually. The national park has a variety of landscapes, including a sandstone plateau, spring-fed waterfalls, and large termite mounds. There are also several wallaby species that can be seen in Litchfield National Park, including the agile wallaby, the short-eared rock-wallaby, and the Eastern short-eared rock-wallaby.

Toowoomba’s official website says Crows Nest National Park “protects spectacular creek scenery, granite outcrops, a scenic waterfall, and eucalypt forest in the headwaters of Crows Nest Creek on the Great Dividing Range west of Brisbane.” Brush-tailed rock-wallabies are unfortunately a vulnerable species in Queensland, but can be spotted on the rocky cliffs near the creek. Visitors may also spot swamp wallabies. It’s recommended not wandering from the designated tracks, for your safety and to protect the wallabies’ habitat. 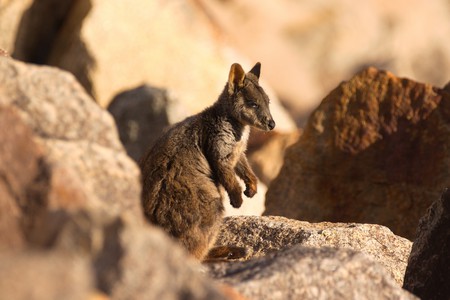 Alice Springs in central Australia is home to one of the country’s largest populations of black-footed rock-wallabies. They can be seen throughout the MacDonnell Ranges, but hotspots include the Alice Springs Telegraph Station Historical Reserve, Heavitree Gap, and Olive Pink Botanic Garden. Visitors can also hand feed the rock-wallabies at Aurora Alice Springs. They live wildly in the ranges, and special food is available at the resort.

Kangaroo Island is home to tammar wallabies, which only have a small mainland population today due to predators like cats and foxes. Although they can be found across Kangaroo Island, the island’s Flinders Chase National Park is the best place to spot this special species. At the national park, tammar wallabies are well-habituated to visitors, particularly around the campground, visitor centre, and park headquarters. They inhabit dense coastal heath and scrub.

Phillip Island is where you will find both swamp wallabies and black wallabies. Swamp wallabies like coastal heath and banksia woodlands, so can be found across Phillip Island in places like Cape Woolamai, and the bushland surrounding Smith’s Beach and Ventnor Beach. However, at Phillip Island Wildlife Park, kangaroos and wallabies (including the parma wallaby) roam free, so you have the opportunity to both pet and hand feed them. 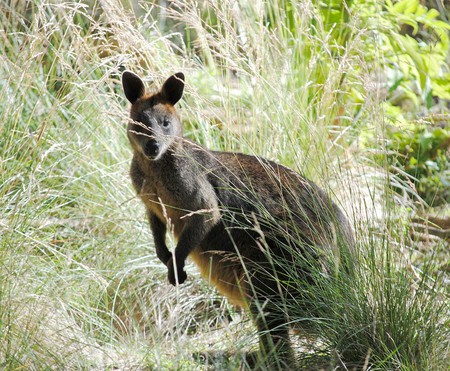 Cape Hillsborough National Park is located about 45 minutes north of Mackay on the north Queensland coast. Its beach, also known as Casuarina Beach, is where many kangaroos and wallabies hang at dawn and dusk. Both species scour the beach at morning tide for mangrove seed pods, coral sand dollars, and seaweed. Head there at sunrise to see them hopping across the beach for yourself.