Where To Find the Best Street Art in Fitzroy 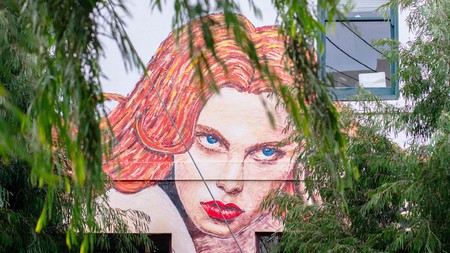 Art is best observed outdoors in Melbourne, a city that has a reputation for groundbreaking street art and world-famous public murals. Most visitors head straight for the laneways of the CBD, but aficionados will also be spoiled for choice further north, in bohemian Fitzroy. This densely decorated neighbourhood is a living, breathing homage to street art, with a scene that is constantly changing but always colourful. Here are seven of the best spots in the area.

The streets of Fitzroy and the surrounding area are, in many ways, the beating heart of Melbourne’s creative scene, so it stands to reason that they are home to some of the most prolific street artworks in the city. From Smith Street to Brunswick Street, the walls and pavements are a vibrant urban canvas of murals, tags and doodles created by everyone from budding enthusiasts to some of the biggest street artists in Australia and beyond. The neighbourhood is a tribute to homegrown talent (and, when it comes to street art, Melbourne has bags of it), and its paintings range from the poignant to the playful. The best way to take it all in is by foot, stopping regularly in the bars and cafés that line the streets along the way. Luckily, food and drink is also an area that Fitzroy excels in. 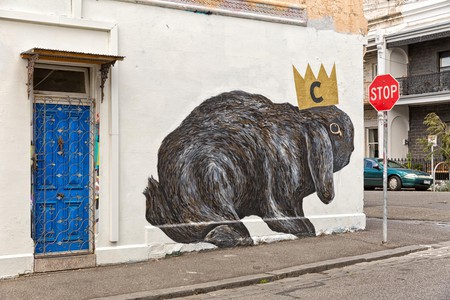 The walls and pavements in Fitzroy are a vibrant canvas of murals, tags and doodles by some of the biggest street artists in Australia | © Martine De Flander / Alamy Stock Photo

Let’s begin with one of the neighbourhood’s most crucial street art pieces. The Fitzroy Faces is the result of a collaborative project by the network Juddy Roller, which saw seven prolific Australian street artists each create a giant portrait inspired by the theme ‘Faces of the Community’. The artists, who included Cam Scale, Adnate, Dvate, Rone, Jason Parker, Heesco and Sofles, were each given a section of the 50-metre-long (164ft) wall on which to compose their vision, creating a monumental mural that reflects the diversity of the city. Cam Scale’s portrait is of a local council worker called Abraham. “He’s a fairly well-known employee in the community and was more than helpful in this project,” the creative told Culture Trip. “I just found him to be a likeable bloke who takes pride in his work and does a lot to keep Fitzroy functional. On top of having an engaging face and interesting background. A perfect subject.”

The late, contemporary US artist Keith Haring visited Australia in 1984, leaving behind an iconic mural on the wall of what was then the Collingwood Technical School (now the Collingwood Arts Precinct). The mural, which was added to the Victorian Heritage Register in 2004, underwent an extensive restoration project in 2013 that saw the Italian art conservator Antonio Rava return it to its former glory. The piece features a small door bearing Haring’s signature and the image of a crawling baby, which went missing some years after the mural’s creation, but was returned during the restoration project. 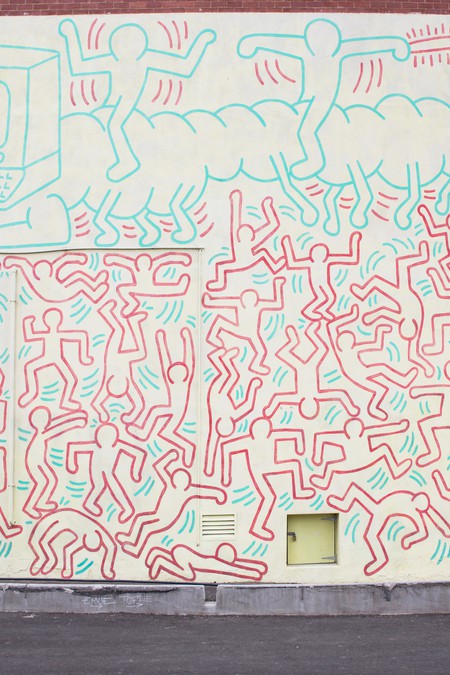 “The Collingwood Haring Mural is loved by an amazing cross-section of the community,” says Marcus Westbury, CEO of Collingwood Arts Precinct. “It’s a symbol for locals and a generation of students from the old Collingwood Technical School, an iconic piece of early Melbourne street art, and it’s now known globally as a rare public work by one of the world’s most iconic artists.” After visiting the mural, grab a pint at the historic Tote Hotel across the street, a mid-19th-century building that has been a major fixture on the Australian punk and metal scene since the 1980s.

Melbourne street artist Rone is known for his thought-provoking depictions of women’s faces, so he was a natural choice for a striking mural designed to mark International Women’s Day 2016. The painting, which is located on what was then the Collingwood office wall of the Minister for Planning and Member for Richmond, Richard Wynne, is a portrait of three female artists. They are Miso (real name Stanislava Pinchuk), known for her pinprick work on paper, Bianca Chang, who is famous for her sculpture and work with paper, and Hana Davies, a film photographer.

“This mural presented a unique opportunity for collaboration between local and state government to showcase the growing medium of street art,” said Shaun Hossack, the founder and creative director of Juddy Roller, at the time of its unveiling. One of the most relaxing ways to observe this mural is from the outdoor seating area of the Grace Darling Hotel – something of a local institution – opposite. 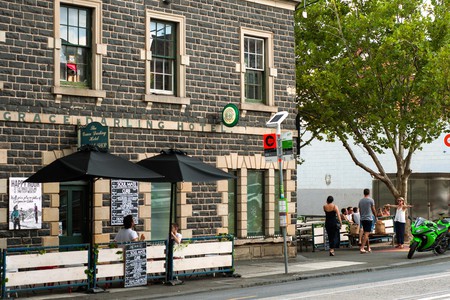 One of the best observation points for admiring the street art in Fitzroy is the outdoor seating area at the Grace Darling Hotel, which is considered a local institution | © Thomas Cockrem / Alamy Stock Photo

Multiple prolific Melbourne street artists, including the abstract painter Slicer, the acclaimed Adnate and the visionary Deams, joined forces for what is one of Fitzroy’s most-recognised pieces: a mural of an Indigenous Australian boy located at the corner of Fitzroy Street and Johnston Street. Adnate, who has carved out a reputation as a fine artist, is known for a body of work that often features Indigenous Australians, and has created murals and pieces telling their stories all over the country and the world. 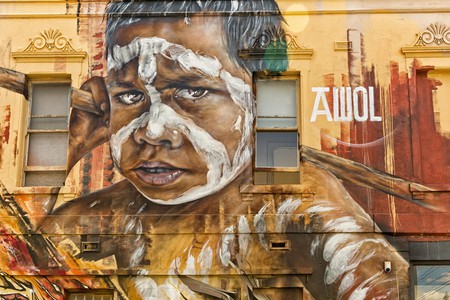 Street art hunting is tiring work, but luckily, in Fitzroy, even sitting down can be done artistically. Head to the corner of Brunswick Street and Victoria Street to check out a series of ceramic seats created by Giuseppe Raneri, an artist of Italian background who grew up in nearby Brunswick. Raneri first created the seats in the 1990s, crafting Spirit, which symbolises freedom, and Light, which symbolises the joy of life, in 1993. He came up with a new addition, called The 3 Brothers Seat in 2014, which, he says, is a personal favourite. “The 3 Brothers Seat was inspired from the trip out to Australia in 1964 with my family from a small town in Italy,” he explains. “It’s about three young boys and the excitement of arriving in a new country and being surrounded by a new environment.” Fancy seeing Fitzroy from a different angle? The ceramic seats are a stone’s throw from the bar and restaurant Naked for Satan, offering the ideal pitstop for rooftop views of the neighbourhood and city beyond. 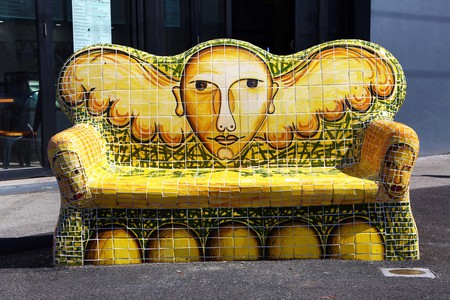 A poignant stop on the street art trail lies in a laneway west of the Evelyn Hotel along Kerr Street, where the street artist Mike Eleven has painted a tribute to Donny Govan, a Victorian boy who was just 16 when he went missing in 2012. Eleven, whose work has appeared both throughout Melbourne and internationally, created the piece as part of a 2016 Missing Persons Advocacy Network campaign titled ‘The Unmissables’. The campaign saw nine families of missing people paired with acclaimed authors and artists, who created short stories and original artworks that aimed to help reignite the search for their missing loved ones. “I’m glad I was able to help Donny’s family in the hopes they find their missing brother whose innocence is now immortalised in paint,” Eleven wrote on Instagram of the project at the time.

Melbourne native and prolific artist David ‘MEGGS’ Hooke has used his skills to brighten many a wall in the city, and now the creative is known for painting colourful, large-scale murals all over the world that feature imagery relating to nature, industry and pop culture. His artworks feature in the permanent paper collections of the National Gallery of Australia and the Victoria & Albert Museum in London, so don’t miss the opportunity to check out one of his street pieces, in the form of a giant magpie that overlooks the corner of Brunswick Street and Westgarth Street. This corner is a veritable street art hotspot – just across the road, the United Firefighters Union Victoria also boasts a colourful, often-Instagrammed piece. 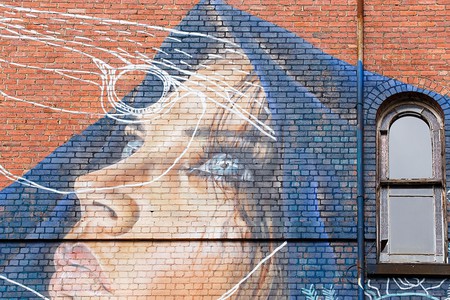