10 Contemporary Artists From Australia To Know

Australia’s contemporary art scene is thriving, with numerous galleries, foundations, collections, museums, and events of international profile. The country’s rich cultural diversity and history are points of departure for many of its artists, who draw from their life experiences to wider, global issues to create works that manifest a deep engagement with the current state of society worldwide. We bring you ten of the best contemporary artists working in Australia today.

One of Australia’s leading contemporary artists, Fiona Hall’s (b. 1953) practice has included many public commissions and projects encompassing a wide range of media, from photography to sculpture and installation, which have increasingly engaged with themes of ecology, history and the effects of globalization. In 2012, Hall took part in dOCUMENTA(13), presenting an installation entitled Fall Prey (2012), which was later shown in her major exhibition at Heide Museum of Modern Art in 2013. 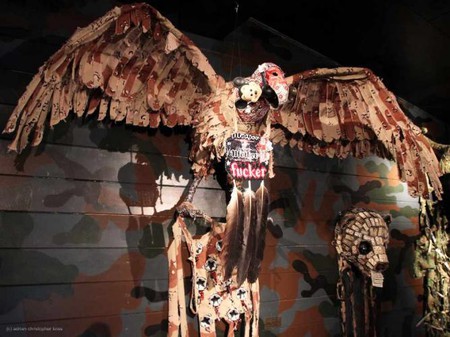 Originally from Chile, Juan Davila (b. 1946, Santiago) emigrated to Melbourne in the 1970s, where he has established a successful artistic practice, primarily as a painter, but also creating drawings and installation. The artist’s practice is rich in references to other artists, psychoanalysis and pornography, as well as politics, religion, pop culture and history. Dubbed by the National Gallery of Victoria as “a leading protagonist in the development of post-conceptual painting,” Davila challenges hegemonic notions of masculinity, dominant historical discourses and myths of national identity. 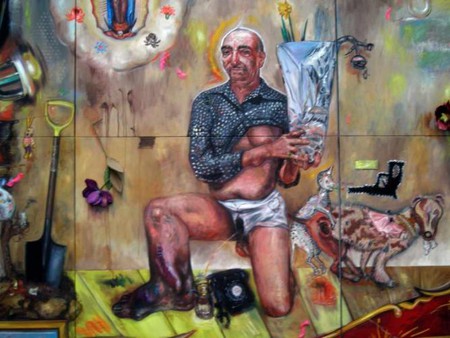 Born in Singapore, Simryn Gill (b. 1959) works in sculpture, photography, drawing, and writing. The artist is a systematic collector, and especially of books as objects of reverence and dispute. Gill’s poetically critical oeuvre alters mundane objects and sites, collecting them in encyclopaedic series that, through the repetition and expansion of small gestures, generate resounding statements about a variety of issues pertaining our modern society and culture, as well as references to her life experiences and memories.

Multidisciplinary and collaborative artist Bianca Hester (b. 1975) is interested in the notion of space and how we engage, encounter and occupy it. Her work explores the way in which space is constructed, and the multi-layered rhythms within and across various sites, while generating other rhythms—in the form of movements, materialities, and actions—in order to open up new possibilities to reconsider our interaction with space. Hester’s works emerge from specific conditions that involve alterations, actions, constructions, objects, collaborations and video. 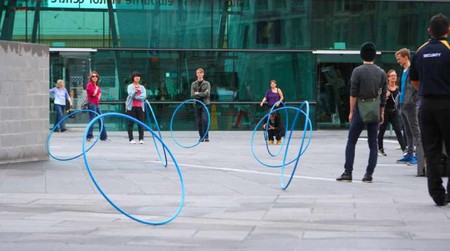 Bianca Hester, A World Fully Accessible By No Living Being, 2011 | Courtesy the artist and Sarah Scout Presents, Melbourne

Ben Quilty (b. 1973) won the Prudential Eye Award in 2014 for his painting practice, characterized by a distinctive, gestural style and thick layering of paint. Using palette knives, he smears, smudges, cakes and slaps the paint on canvas to create figures rendered in blocks of contrasting colors. Quilty’s oeuvre portrays contemporary Australian identity and is informed by his youth as a self-destructive character of Australian masculinity, marked by drugs, alcohol, and recklessness — images of skulls, snakes, Siamese twins and other obscure, dark and uncanny elements transpire through his canvases. Quilty also spent some time in 2011 as an official war artist in Afghanistan, an experience that served as inspiration for some of his portraits of soldiers, such as that of Sergeant P. After Afghanistan (2012). The Rorschach series of portraits were created using a particular painting technique that creates a geometric monoprint of thick oil paint by pressing a painted canvas onto a clean one. Inspired by the inkblot tests created by the 19th century psychologist and pioneer of mental health research, Hermann Rorschach, the paintings create a new visual language. 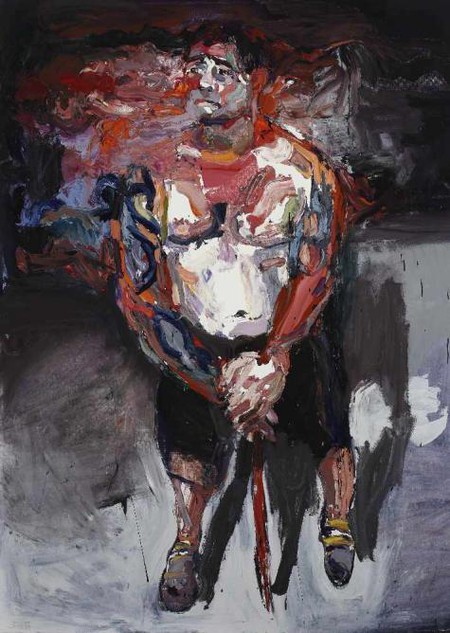 Inspired by architecture, design and nature, James Angus (b. 1970) challenges the traditional norms of sculpture by playing with volume, scale and surface. His oeuvre ranges from modest to large scale, and reveals an interest in materials and processes. Angus’s works often replicate existing forms or objects, while some also manifest distortion, as if put under stress or subjected to some invisible force. His three sculptures Red Cast Iron Inversion (2012), Yellow Pipe Compression (2012) and Orange I-Beam Knot (2012), presented at the 19th Biennale of Sydney (2014), dismantle the structural supports of the typical modernist grid building — the I-beam, tubular pipe and metal plate. These elements are transformed into sinuous, sensuous, knotted and gritty shapes, metamorphosing the robust metal into a pliable material. 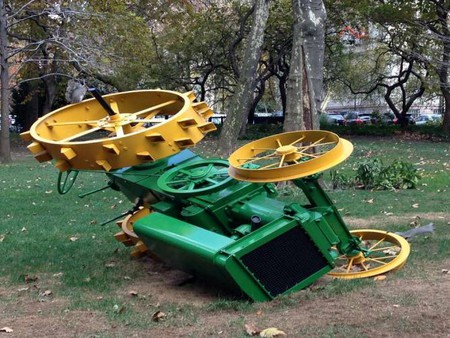 Multimedia artistPatricia Piccinini(b. 1965) works in painting, video, sound, installation, digital prints, and sculpture, and often also commissions specialist collaborators from various fields of contemporary industrial manufacture. Her practice discusses the impact of technology on our lives, and how contemporary ideas of nature, the natural and the artificial are changing our society. Piccinini is especially concerned with issues of bio-engineering and human reproduction, and their ethical and social implications. She is best known for her detailed biomorphic sculptures of imaginary creatures. These uncanny distortions of nature bear a visionary outlook on what the future of humanity could be with experiments on genetics, hybridisation, cloning and other scientific scenarios. The stags (2008), for example, portrays two scooters as two living animals, in a synthesis of nature and technology.

Originally Canadian, Callum Morton (b. 1965) works with architecture, modernism, and the emotional and social impact of built spaces, creating architectural-style models with the aid of computer skills. Taking familiar buildings and forms from architectural history and setting them against their original, often idealized purposes, Morton tells a hidden or darker story. By transforming architecture and spaces, Morton elaborates on the global tendency of aesthetics to conform to an international style, generally found in Europe and North America, which influences regional practices. Themes of destruction, decay and visual representation are recurrent in his oeuvre. For instance, in Silverscreen (2006), such topics are expressed through a series of sculptures inspired by the outdoor cinema screen. Morton also references his interest in the spread of Modernism from the West and the influence and diffusion of its cultural forms across the globe. 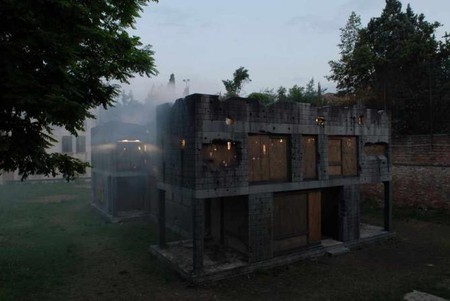 Julie Rrap (b. 1950) was involved with body and performance art in the 1970s – an aspect of her practice that continued to influence her work, which shifted to photography, painting, sculpture and video. Her oeuvre belies a deep concern with the ways the body is represented, especially the female body in Western art, and explores this theme through a variety of media that challenge conventions of form and content. Through her visual renditions of transformed bodies, Rrap interrogates the common symbols of femininity, such as in Stepping Out, a sculpture of a woman’s feet severed at the ankle and growing fleshy stiletto heels. The artist here is hinting at the pressure women face to modify their bodies to fit with impossible standards of beauty. 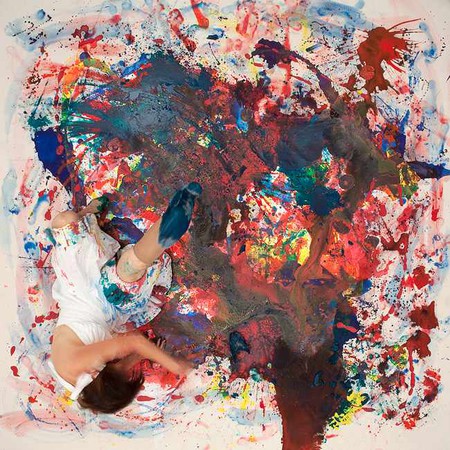 Working with digital video, photography and installation, Daniel Crooks (b. 1973) stretches and distorts reality as a means to challenge our perception of it. His complex and transformed images of space and time infuse the ordinariness of his subjects with a new dimension. Crooks’s manipulation of time gives the impression of crossing its dimension and limits. In his early work, he collaged thin slices of moving images to reveal the progression of time—refracting temporal geometry, and eliciting rhythm and movement. For IPMIC, Crooks is working on a commission that will be exhibited at ACMI in 2016, which engages with his long-standing interest in the use of trains—on cameras and as an extension of them—in the history of moving images. In particular, the artist will explore the film genre of ‘phantom rides’, popular in Britain and the United States in the early 1900s. 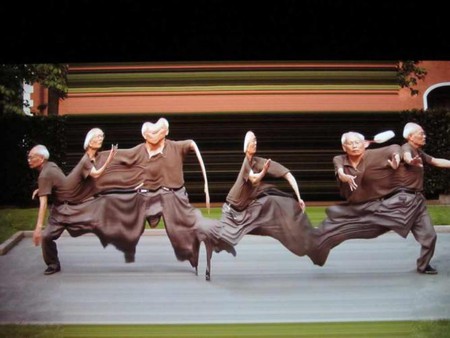 Daniel Crooks, Static No. 12 (seeks stillness in movement), 2009-2010 | © Franklin Heijnen/Flickrcommons
Give us feedback