'This Town' Has A New Singing Star, Sarah Rzek

Melbourne only takes a few things seriously: arts and music, culture, and coffee. Every step you take, particularly in the heart of the city, you will hear the sound of music, most likely a local act singing in a café or even a street performer playing the didgeridoo. And if you’re lucky, you will catch Sarah Rzek.

Sarah and the City

Melbourne-born and raised, Sarah Rzek is a woman also singing to her own melody. Her musical identity is partly inspired by the soulful streets of Melbourne. ‘I’m from Melbourne, I do many shows in Melbourne, I write my music in Melbourne. It is where all the magic from my music started. My hometown and my music go hand in hand,’ Sarah says.

She has been blessed with the opportunity of performing in many venues across Victoria. The most inspiring thing for Sarah is the spirit of the ‘Melburnian’ audience taking time out of their weekend and cheering her on as she serenades locals with classic covers and originals. ‘There’s no other way to explain it. We love to connect to music and support local talents as well,’ she says. Melbourne is filled with cafés, pubs and restaurants that soak up various music styles and local acts. They are the foundation for Melbourne’s wonderfully renown arts precinct. ‘I would love to perform around the rest of Australia and the world, but I think at the moment there are still so many venues to explore in Melbourne to play my music,’ she says.

Sarah is your ‘Sunday night’ acoustic act. She has the rare ability to get audiences to clap her on and dance while producing softer-sounding songs. Her voice has its own distinct sound, most commonly described as a gentle blend of mellow pop and folk. Her fingers relentlessly dance over the guitar strings as she sings with eyes closed, into the microphone. ‘I’m not vocally trained in crazy voice acrobatics. I think it’s more important to connect with people by singing with emotion and creating something special,’ says Sarah. 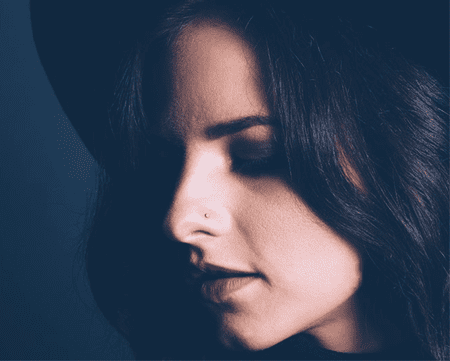 Her debut commercial single ‘This Town’ is a slow melody with fast-paced guitar riffs. It is soothing to the ear while the eyes are battling with water, trying to splurge out. With emotion pouring through the song like the veins that run in our bodies, it is no surprise Sarah has been scouted by one of Melbourne’s most famous record producers and journalists, Ian ‘Molly’ Meldrum.

Molly Meldrum is one of Australia’s most adored television personalities. He is a man with a low, croaky voice and is always seen wearing a brown stetson hat. He has helped so many become singing sensations, including Kylie Minogue. He has a nationally recognised skill for handpicking talent that best represents the people of Australia.

It was Sarah’s boyfriend Ben who got her in Molly’s line of sight. Ben did electrical work at Molly’s home and requested she pass on her freshly produced five-track EP, which was due to be released in the coming months. Molly instantly fell in love with her sound and called her in. ‘Molly Meldrum is such a strong-hearted man who just wants to help me because he loves music. He wants to share it with everybody,’ Sarah says. ‘I will forever be grateful for his support and friendship,’ she adds.

In Melbourne, it is hard to have an individual music identity with so many other musicians about. There are more upcoming female artists it seems than ever before. Sarah constantly tries to find new ways to make her show different, by playing acoustic guitar and electric, piano, and even looping vocal patterns for a slightly electronic feel. Sarah believes that being a musician is about the evolution of the individual sound. ‘I won’t stop doing that as long as I can still use my brain,’ she explains. ‘I also don’t like to stick to one genre, I can get a bit bored of the same style of music all the time, so I’m always wanting to change it up,’ Sarah says. If you ever see Sarah perform live, you will undergo a musical journey of pop, reggae, blues and electronic.

The most famous Melbourne television show, Neighbours has even recognised the talent of Sarah Rzek. Her single ‘This Town’ features on the heartfelt episode 82. The television show takes place on Ramsay Street – a now iconic road in Melbourne’s inner suburbs. It seems fitting for ‘This Town’ to be featured on Neighbours. If you are from England, you may be familiar with the show; however, it is a story made from Melbourne and reveals how this city is one giant community in its own right.

Along with Sarah Rzek, there are many local acts wandering around the bustling Melbourne streets with a guitar in hand. It is this city’s need for arts and music that makes Melbourne the most liveable place to live.