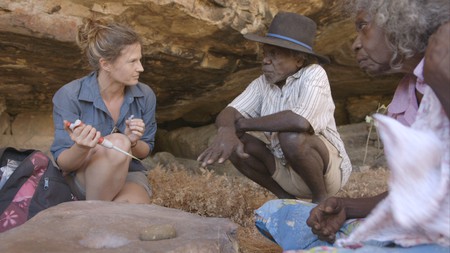 Archaeologists have unearthed an ancient camp-site in the Northern Territory, which proves that Aboriginal people have lived in Australia for a minimum of 65,000 years, 18,000 years longer than previously estimated.

The Madjedbebe site has been excavated four times since the 1970s, with former projections unable to establish first occupation beyond 47,000 and 60,000 years due to limited carbon dating and luminescence technologies.

“Now we know humans were living in northern Australia a minimum of 65,000 years ago, the search will be on to discover each of the steps they took on the way,” Professor Clarkson from the University of Queensland said.

The excavation in Kakadu was made possible thanks to a unique agreement with the traditional owners of the land, the Mirarr people, which gives them the right to veto and appoints them as custodians of the artifacts. 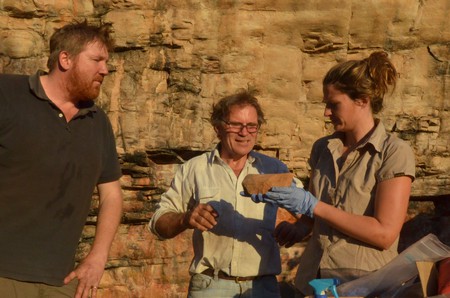 The team led by associate professor Chris Clarkson found more than 10,000 artifacts, including 17 human remains as well as a treasure trove of grindstones, seed-grinding tools and stone axes verifying that early Australians had a tool-kit more sophisticated than any other culture at the time. “The site contains the oldest ground-edge stone axe technology in the world, the oldest known seed-grinding tools in Australia and evidence of finely made stone points which may have served as spear tips,” Clarkson said. The research team also uncovered large quantities of ground ochre, suggesting that the earliest humans in Australia were keen artists. Diggers even discovered an upper jaw fragment of Tasmanian Tiger painted in red pigment, which reveals the central role of ochre in early traditions.

The findings, which were published last week in the prestigious science journal Nature have significant global implications. Clarkson believes the discovery alters the chronology of the journey out of Africa by modern humans. Previously, there was no evidence to indicate that modern humans who left Africa had reached south-east Asia or Australia beyond 50,000 years ago. The new evidence confirms that not only did they leave earlier than assumed, but it also verifies that early Australians embarked on the first major maritime migration in history, sailing at least 90 kilometres across open ocean. 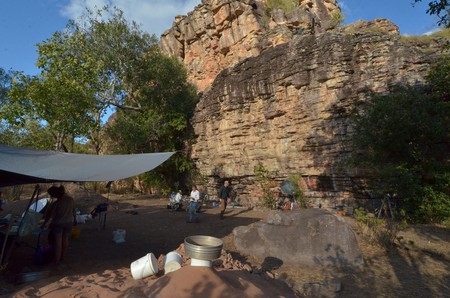 The dating techniques, using advanced single-grain optically-stimulated luminescence were conducted by Professor Zenobia Jacobs at the University of Wollongong. They lay to rest the claim that the arrival of Aborigines caused the wide extinction of megafauna, including giant kangaroos and a giant wombat like creature Diprotodon, and that they instead coexisted for at least 20,000 years.