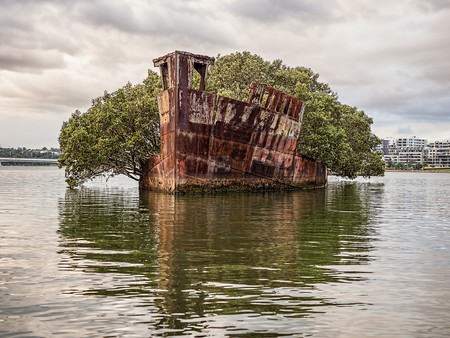 Spend an afternoon in Homebush Bay, Sydney and see a sight like no other. The Bay, which is a former cemetery for retired ships, is an impressive sight, but one particular vessel – which has affectionately been dubbed by locals the ‘Floating Forest’ – has become the key attraction.

The SS Ayrfield, formally called the Corrimal, is a 1,140-tonne steam collier ship, which ran coal between Newcastle and Sydney during the 20th Century, before being reassigned to assist as a transport ship for Australia during World War II (WWII). Built in the United Kingdom in 1911, the SS Ayrfield retired to join those of its kind in the shipwreck yard in Homebush Bay, thirty minutes by car from Sydney’s Central Business District (CBD). The intent was to dismantle the steel vessel, but during the work, plans came to a halt as operations at the shipwreck site ceased, leaving the ship half standing.

Many ships used in WWII remain in Homebush Bay today, although none as impressive as the SS Ayrfield. The ship was rediscovered only in the past decade when the state made a diligent effort to try purge the Bay of leftover chemicals.

The site – which is free to visit – then became popular with local photographers via social media and online photography sites, making it one of the most interesting spots for camera junkies and alternative tourists in Sydney. 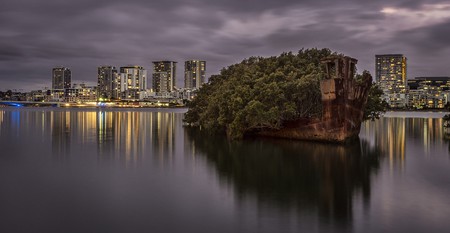 Over time, the inevitable decay of The SS Ayrfield has been met with the powerful forces of nature and more specifically, the triumphant wild growth of a mangrove forest, which is now the ship’s primary tenant. With vegetation bursting over the steel hull – providing a dramatic contrast to the bay’s peaceful backdrop. The ‘Floating Forest’ is one of Sydney’s most unique attractions and well worth visiting.

Head out to the Olympic Park Archery Centre in Homebush Bay. There are train and bus routes from Central Station; the journey takes approximately 30 minutes by car. At the centre there is free parking available just off Bennelong Parkway.

On arrival at the archery range, visitors should cross the road and follow the footpath to the end of Amalfi Drive; the wreck will be visible from the waterfront walkway. The impressive sight can also be viewed on Google Maps satellite images. 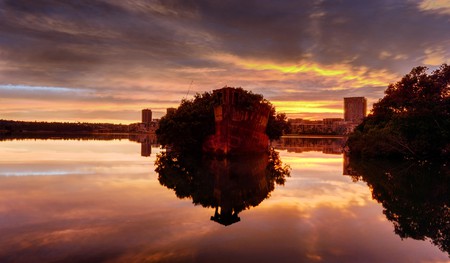