The Best Things To See and Do in St Kilda, Melbourne 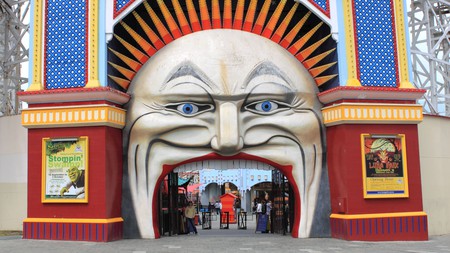 “There’s still a lot of old St Kilda that’s still around, albeit it’s a little harder to find than it used to be,” says Justin Joiner from The Local Taphouse, a craft beer pub on Carlisle Street.

“It’s a great neighbourhood – I lived there for six or seven years as I was working in the neighbourhood, and it’s still got its soul. It’s been a little bit gentrified, but there’s some absolute institutions that have been around for what seems like forever that continue to be the heartbeat of the place,” Joiner says.

Only six kilometres (3.7 miles) south of Melbourne’s city centre on the shores of Port Phillip Bay, St Kilda is home to more big-budget building developments and cashed-up residents than it used to be. But there’s no shortage of venues that echo the old days.

“The likes of Claypots, Cicciolina’s, the Prince, the Espy – all these kind of venues keep the nostalgic, good old days of St Kilda going,” Joiner says. “There’s not as much live music around as there used to be – we’ve lost a few venues like the Greyhound and Pure Pop Records that used to do some great live music – but there’s still great food to be found, and great bars.”

For a taste of the real St Kilda, read on for the top 10 things to see and do in this seaside suburb of Melbourne.

Sip on craft beer at The Local Taphouse

The sticky-carpeted pubs of St Kilda’s red-light days have made way for a new wave of much more modern establishments like The Local Taphouse. Pouring pints of microbrews from its 20 taps since 2008, this multi-award-winning pub is the brainchild of Steve Jeffares, Guy Greenstone and Justin Joiner – three men on a mission to prove that there is more to beer than VB and Carlton.“The aim was to replicate that European tavern sort of feel, but to do craft beer in a way that hadn’t really been done in Australia at that stage,” Joiner says.“We really wanted to start something that shifted consumer habits – our dream was that instead of people coming in and saying they want a pot of heavy or a pot of light, they would come in and ask for beer like they would ask for wine. In the way that they’d ask for the chardonnay, they’d come in and ask for a saison or an IPA or a porter or a stout. That’s what we set out to do: share our love of great beer with as many people as we could.”

St Kilda was a playground for Melbourne’s wealthy before World War II – a stylish seaside retreat on the city’s doorstep that even boasted its own amusement park from 1912 onwards. Luna Park’s smiling face still greets visitors hopping off the No. 96 tram from Bourke Street, providing the postcard picture of the neighbourhood. The park boasts more than 20 rides, including the largest carousel in the southern hemisphere and the second-oldest operating roller coaster in Australia, the Scenic Railway. Luna Park is just one block from the Port Phillip Bay foreshore, which swells during the warmer months.“It’s definitely a summer sort of area,” Joiner says. “It really comes to life. There are things going on every night – night markets and outdoor cinema and all those sorts of things. It definitely springs to life in summer.” 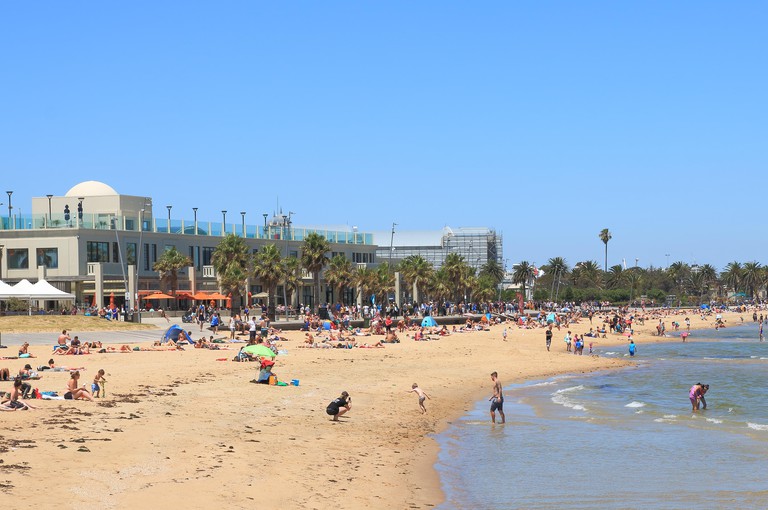 St Kilda beach might underwhelm international visitors accustomed to the golden arcs of sound in Sydney, such as Bondi, Coogee and Manly. But St Kilda is certainly one of Melbourne’s famous swimming spots. Towering palm trees line the waterfront esplanade that buzzes with pedestrians, cyclists and rollerbladers, except when the Sunday market sets up its stalls between October and April. The sight of little penguins returning to the breakwater beyond the 1850s pier each day at sunset is another St Kilda special.

Open In Google Maps
Victoria, Australia
Give us feedback

Check out the revamped Espy

Live music is synonymous with St Kilda thanks to the venues like the Hotel Esplanade, universally known as the Espy. A grand hotel built at the foot of the pier in 1878, the Espy transformed into one of Melbourne’s hottest gig venues in the 1970s when the Gershwin Room was converted into a stage for live music. Hospitality group Sand Hill Road gave the place a massive makeover in 2018, even opening the fifth level to the public for the first time.“The Espy is one of the more incredible renovations you’re going to see in a pub,” Joiner says.“Everyone waited with bated breath for it to reopen, and hoped that the Sand Hill Road guys didn’t stuff it up – and they absolutely didn’t. They’ve absolutely nailed it. They left the Gershwin Room untouched, but they upgraded the sound and lighting and left the rest of it to be as it always has been, so there’s some great gigs going on there almost every night of the week.”

See a gig at the Palais Theatre

Across the road from Luna Park, the Palais Theatre is St Kilda’s other iconic live-music venue. An Art Deco masterpiece built as a cinema in 1927, the Palais began inviting bands onto its stage during the 1950s, welcoming everyone from the Rolling Stones and the Beach Boys to Tom Jones and Roy Orbison over the years. A 30-year restoration project began in 2017, cementing the 3,000-seat theatre’s place in Melbourne’s music scene for decades to come. “It’s still going strong,” Justin says. “It’s still one of the best places in Australia to see a gig, that’s for sure. It has been renovated pretty extensively as well, so it’s not going anywhere. It’s great.”

Raise a glass at the pub

St Kilda specialises in old-school pubs that have been given a contemporary coat of paint, such as the Prince on Acland Street and Freddie Wimpoles, formerly the George Hotel, which dates back to 1857. “The Prince hasn’t gone overboard with the renovations – it’s got a bit of the old St Kilda about it,” Joiner says.“Freddie Wimpoles is the other one on the corner of Fitzroy and Grey Street, and the owners are good mates of ours and they do great things with craft beer. You can go into just about any venue in St Kilda and get a decent beer of some sort now, even if it’s not a craft beer venue.”

Feast on seafood with a side serving of live music

Loads of great bars and eateries occupy the area where Acland Street meets Barkly Street, near the northwest corner of the St Kilda Botanical Gardens. Few have the reputation of Claypots, a St Kilda stalwart that has served ocean-fresh seafood alongside live jazz since 1998. The menu changes monthly and the catch of the day is scribbled on the blackboard, but the atmosphere in the hotchpotch dining room and leafy outdoor courtyard is one constant. “It’s been there as long as I can remember – amazing food, pretty rough-and-ready sort of fit-out, and live music blaring,” Joiner says. “You’re sitting there eating some beautiful fish with live music blaring on Friday night, it’s really cool.”

One block up Acland Street, Cicciolina is another of the neighbourhood’s most-loved restaurants. This Italian institution has plated up simple, authentic Mediterranean meals since 1993, washed down with a wine list 250 bottles deep. Owners Lisa Carrodus, Barbara Dight and Virginia Redmond added a second eatery, Ilona Staller, to St Kilda East in 2010. “It’s a real locals hang-out,” Joiner explains. “The three women also own Ilona Staller on Carlisle Street, which is only a few hundred metres up from where we are. They’re real St Kilda heart and soul type people as well.”

Monarch Cakes has been baking in this same shop since way back in 1934, maintaining plenty of the same time-tested Polish recipes the whole time. Jewish migrants have built a life in St Kilda since the 19th century, and sought shelter here when fascism swept Europe in the 1930s. Monarch Cakes is an emblem of that community, developing a cult following for its cheesecake and chocolate kooglhoupf. In fact, a visit is often hyped as one of Melbourne’s must-have culinary experiences. “I’ve been there once, it’s definitely something people talk about a lot,” Joiner says. “People go to Acland Street specifically for it.”

Grab a coffee in an old kosher butchery

It wouldn’t be Melbourne without a smorgasbord of speciality coffee shops steaming flat whites, and Acland Street certainly claims its fair share of cafes. Carlisle Street in St Kilda East also features some of Joiner’s favourites, including Wall Two 80 – an old kosher butchery that’s traded meat for macchiatos.“There’s so many, to be honest – it’s hard to pick one,” he says. “There’s the Wall — whatever their name is now, Wall Two 80, it should always be known as the Wall – and Las Chicas as well, which is also on Carlisle Street. Monk Bodhi Dharma is another one just near us that do vegan food and coffee, and they’re pretty amazing as well.”