Halfway between Melbourne and Geelong lies the suburb of Werribee, which is Aboriginal for backbone or spine and was named so after the shape of the Werribee River. Established as an agricultural settlement, Werribee has several tourist draw cards including a free range zoo, rose garden and equestrian centre; however, the crowning jewel is an Italianate mansion dating back to 1874.

When Scottish-born Thomas Chirnside first moved to Werribee in the late 1840s, the town was a common overnight stop for those travelling between the developing cities of Melbourne and Geelong. By the 1870s, Thomas was joined by his brother Andrew, and together, they founded the Chirnside Pastoral Empire and began building an Italianate-style bluestone mansion. Completed in 1877, Werribee Park Mansion supported an extensive farming workforce across ten acres, but after Thomas committed suicide in 1887, the mansion was left to Andrew and his sons to manage. In 1890, Andrew died of heart disease, and his son George Chirnside inherited the mansion. 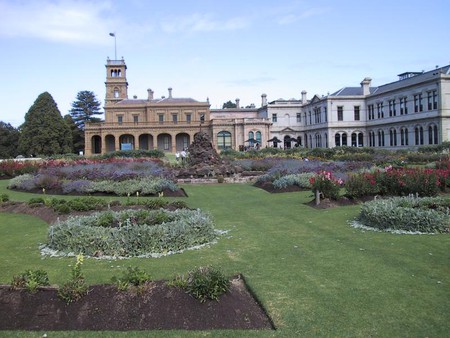 Between 1923 and 1973, the residence was home to a Catholic seminary, Corpus Christi College and several wings were added by the monks residing there. In 1973, the seminary was sold to the government and renamed Werribee Park Mansion. Three years later, the mansion featured in the film The Devil’s Playground, and in 1982, it was one of the sets used in the musical comedy, The Pirate Movie. In 1996, the mansion was depicted as an English manor belonging to the character of Penelope in the children’s comedy series, The Genie From Down Under.

The wings added during the mansions years as a Catholic seminary have since been transformed into the five-star Mansion Hotel & Spa, which was named by the Travel Gold List Awards as the ‘Most Romantic Hotel in Australia.’ The property now features 60 rooms as well as Joseph’s Restaurant & Bar and is a popular destination for weddings. The mansion has several rooms open to the pubic including the billiards rooms, main bedrooms, reception rooms and the kitchen, and there are Chirnside family heirlooms, furniture and clothing on display. Werribee Park Mansion hosts a number of events including the Werribee Christmas Carols, Harvest Festival, polo championships and the music festival, Let Them Eat Cake. In 2007, the mansion hosted two Elton John performances as a part of his Rocket Man Solo Tour.

Upon their arrival in Australia, the Chirnside brothers acquired a freehold on 80,000 acres of land where they planted a bountiful orchard of fruit trees including peaches, grapes, apples, quinces, pears, several plum varieties as well as walnuts and olives. During the Catholic seminary period, the monks tended to the orchard, and each autumn, they picked and processed the fruits; however, following the closure of the seminary, the orchard was forgotten, and amid some of the state’s worst droughts and winter floods, only 64 trees survived. Since 2010, Parks Victoria, along with a community group, have tended to the orchard and have been working to identify and protect the trees.