A Guide to Sydney Harbour Bridge 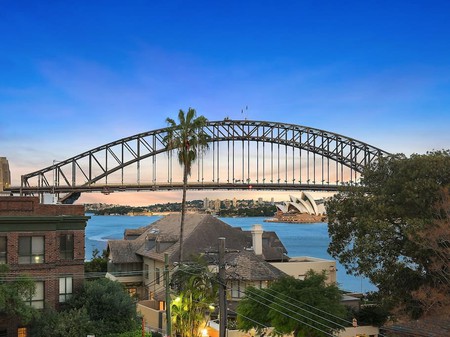 The Sydney Harbour Bridge is one of Australia’s most iconic landmarks. The ‘coat hanger,’ as it is known to locals, connects the northern and southern shores of Port Jackson Harbour in the heart of Sydney.

Tourists gaze at the steel arch in awe. They exercise their forefingers as they capture on their cameras the attraction in its finest form. The bridge is the largest steel-arch bridge in the world, and is one of the most adored places in Sydney.

1815 was the year of inspiration. Francis Greenway proposed the idea of building a bridge that connected Milsons Point and Dawes Point. The likelihood of the bridge actually being built was slim to none during this time. It wasn’t until Federation that the bridge was back on the agenda. Submissions were open for architectural designs of the bridge, but none were accepted. Only in 1924 — after World War I — did the construction of this famous bridge began.

Around 1,400 men endured hard labour for over eight years, and 16 of those men died during construction. The day the steel arches fused together, Sydney residents came together to celebrate. Two years later in 1932, the bridge opened. 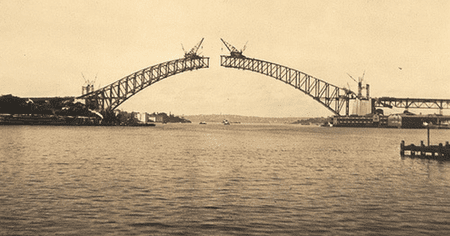 The bridge had warmed locals’ hearts from the very beginning. It was the first major step after the Industrial era. It was New South Wales Premier Hon. John T. Lang who declared the bridge open – a moment temporarily disrupted by a treacherous Captain Francis De Groot, the rowdy member of the paramilitary group the New Guard drew his sword and cut the ribbon prematurely. Police arrested the captain, and celebrations continued happily without him as Premier Lang re-cut the ribbon and made it official. 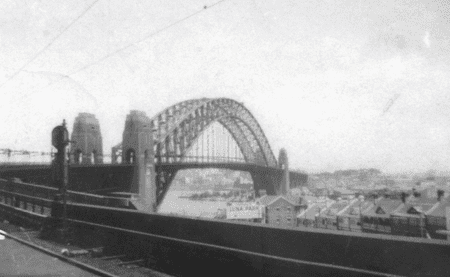 Sydney Harbour Bridge cost a total of $4.2 million. 6,000,000 steel rivets were driven into the bridge by hand.

The city decided to close down the tram system to make way for a better transport system in the 1950s. Originally, the bridge had two tram tracks and lanes for horse and cart. Now, with technology informing our architectural society, the bridge hosts eight traffic lanes and two rail lines. No push bikes or horses are allowed on the bridge.

Once construction was complete, the bridge needed a new paint job. Approximately 272,000 litres of paint were needed to paint the iconic landmark. Crocodile Dundee actor Paul Hogan was one of the riggers on the bridge during the 1940s. He helped repaint the bridge after fearless pilots flew planes under it during World War II.

Sydney Harbour Bridge stands 135 metres above the water. The roadway is 51 metres above sea level. If you are an adventurer, take the opportunity to climb the bridge. There are simpler routes you can walk if heights do not agree with you. 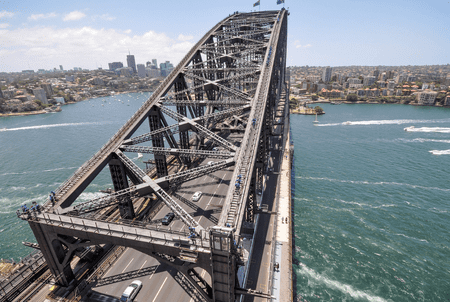 The view from the Pylon Lookout. | © Jorge Láscar

You can also venture to the Pylon Lookout, where you can see the detail of the steel work without binoculars.