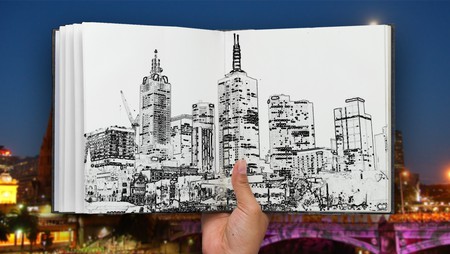 As part of our literary city guide series, we’ve mapped out the literary landmarks, bookstores, writers and books of contemporary Melbourne.*

In 2008, Melbourne was elected by UNESCO as an official ‘city of literature.’ The designation honored the state capital of Victoria’s long-standing commitment to the literary arts, one that can trace its heritage back to the “book book” that followed a gold rush in the 19th-century, and the city’s library, one of the first in the free and public biblio institutions in the world. Melbourne is home to countless publishers, Text and Lonely Planet among them, as well as the Melbourne Writers Festival and Wheeler Centre, which puts on a internationally acclaimed literary program. Melbourne’s writers and the books set within the city are near canonical, as its bookstores are storied. 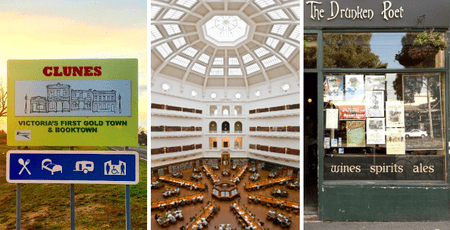 The State Library of Victoria and The Wheeler Centre
Established in 1854, the library is Australia’s oldest and one of the world’s first free public libraries. The La Trobe reading room is worth a glance just for a glimpse of its massive dome. Attached is the The Wheeler Centre, home to many literary organizations, including the Melbourne Writers’ Festival.

The Melbourne Savage Club
One of Australia’s oldest society clubs, the Melbourne Savage Club was borne out a bohemian spirit and takes its name from Richard Savage, a 17th-century English poet. The MSC publishes the lit mag A Moveable Feast, and its literary archive is reputed to be one of the best in the country. Gaining entry isn’t easy, but it’s worth inquiring.

The Athenaeum Library
This semi-public library is hidden above Melbourne’s historic Atheneum building, which also houses a theater, and a performance space. For the cost of two new hardcover books, you can become a member and check out books from its acclaimed curated selection.

The Drunken Poet
Voted one of the top ten Best Irish Pubs In The World (Outside Ireland) by The Irish Times, The Drunken Poet covers its walls with portraits of poets from around the world. The venue hosts weekly events, including poetry readings and live music, plus they serve the best toasted sandwiches in West Melbourne.

Clunes
A bit outside the city limits of Melbourne is the town of Clunes, which boasts itself as “Victoria’s First Gold Town and Book Town”. The town, which hosts an book festival every May, still keeps its Wild West flavor and features an entire street of bookstores. Dust jackets never felt so needed. 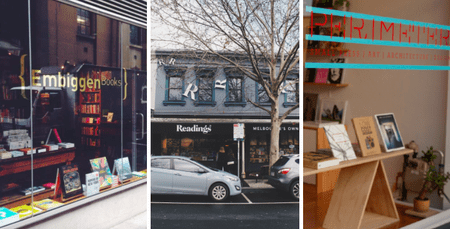 Collected Works
If poetry catches your fancy, a trip to Collected Works is a sine qua non. Founded in 1985 and located in the historic Nicholas Building, Collected Works not only stocks Australian poetry, but international poetry too. The shop holds numerous readings and has a loyal patronage.

Embiggen Books
Located just behind the State Library of Victoria, Embiggen Books is an independent and family-run bookstore with an ever-changing collection. It’s is reminiscent of a olde-time traditional bookshop, including a long ladder to reach the top of its very tall shelves.

Perimeter
This small press and bookstore specializes in artist books and non-traditional print publications. Its specific focus means that you’re likely to find publications that you won’t anywhere else in the city, an showcases specific publishers with a flair for exhibition.

Hares & Hyenas
Originally opening as a speciality bookstore selling books and magazines of the LGBTQ+ genre, Hares & Hyenas has transformed into a café and bar where you can come with friends for a drink, or just have a browse through the thousands of available titles. The store is also involved in the ‘Word is OUT’ series, an annual queer lit event.

Readings Bookshop
The winner of the 2016 Bookstore of the Year, Readings is a coveted shop that has since grown into a small chain. Readings shelves a ton of new publications and hosts many of the biggest readings in the city. 10% of all proceeds goes to the Readings Foundation, which is a literacy advocacy institution. 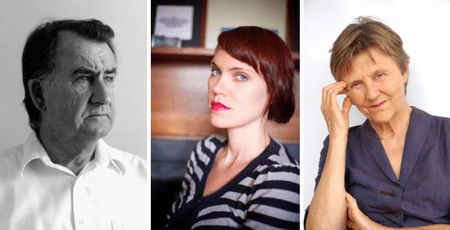 Gerald Murnane
Murnane isn’t just widely considered one of Australia’s greatest living writers, he’s also the country’s perennial top contender for the Nobel. Before pursuing a writing career, Murnane had briefly enrolled in seminary school, yet writing carries an air of monkishness: a deeply meditative and non-traditional metaphysical tone. The Murnanian style has been exemplified in his masterworks such as The Plains and Inland, which concern themselves more with a daring presence of mind than plot or character. Murnane’s latest novel A Million Windows was published in 2016.

Helen Garner
Garner is credited with bringing a strong female literary voice onto the Australian literary scene at a time when Australian women writers were considered a novelty. Her debut novel Monkey Grip turned heads with its highly stylized prose and raw examination of Melbourne’s lower-class residents as they wrestle with financial issues and drug addiction. Garner’s later works such as Cosmo Cosmolino and The Spare Room have drawn praise for their uncompromising emotional content. Garner has also published several essays and works of investigative journalism.

Peter Carey
Carey is the only Australian writer to win the Miles Franklin Award, the country’s most prestigious literary prize, three times in a row and the one of only three writers to have won the Man Booker Prize twice. Carey got late start in his writing career, having spent years in advertising—not without coincidence the protagonist of his first novel, Bliss, is an ad exec who learns that his life has up to that point been literally been spent in hell. While Carey’s early writer career was spent in Australia, later periods inhabited both Tokyo and currently New York.

Josephine Rowe
A rising star in the Australian literary community, Rowe began publishing short stories in numerous Australian magazines before branching out to international venues such as McSweeney’s and the Paris Review. She developed a following with her first two story collections — How a Moth Becomes a Boat and Tarcutta Wake — and later won Australia’s Jolley short story prize. Her debut novel A Loving, Faithful Animal was published by Penguin Books Australia in 2016 and will appear in the US from Catapult in 2017.

Christopher Wallace-Crabbe
Melbourne’s most famous living poet began publishing in the late 1950s. Early in his career, Wallace-Crabbe was given a teaching appointment at Yale and later Harvard where he was pivotal in bridging Australian and American poetics. Crabbe’s poetics combines colloquialism and folk language with higher-brow sophisticated lexical reveries. He is noted for his energetic and sermonic readings. Crabbe has been the recipient of several awards, including a Member of the Order of Australia and a Centenary Medal. He is a noted human rights advocate. 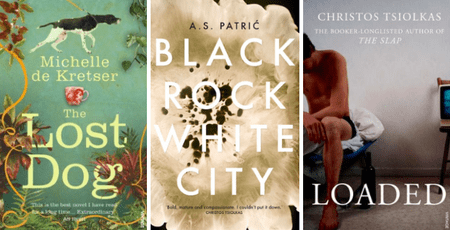 The Lost Dog
This strange and delightful novel by Michelle de Kretser is at first set deep in the Australian bush. An Indian-Australian academic named Tom Loxley, on a writing sabbatical away from Melbourne, is writing a book about Henry James. He has brought his dog along for company. But when the dog spots a wallaby and chases it deep into the bush, Loxley’s is sent into an unexpected reverie of storytelling, highlighting Melbourne as a nexus for Loxley’s current identity and his Indian heritage all while truly finding out what has really happened to his dog.

Loaded
Christos Tsiolkas debut novel Loaded spans 24-hours in the life of hedonistic and misanthropic -young gay man named Ari who rebels against any conventional notions of masculinity, and familial and societal expectations, and takes refuge in the comfort of a transvestite friend, if he takes comfort in anything. Tsiolkas’s talent with nihilistic story telling is on par with other drug-fueled Gen-X novels. That Ari is a troubled youth is besides the point — his teenage rebellion is part natural, and part nurtured by a perceived need to come out of the closet, guns blazing.

Walking
Poems about Melbourne are common enough, but if you’re looking for a collection that really hits the feeling of the city, Kevin Brophy’s Walking does a stupendous job of setting the city into verse. Here the acclaimed poet takes on the role of flaneur, wandering around a city that is both familiar and bewildering to him. There are other wonders filtered through Brophy’s mind and put on the page as this new and selected collection traces back almost thirty years, charting the poets outer and inner observations.

Three Dollars
An Melbournian epic, Elliot Perlman’s debut novel Three Dollars follows the life of Eddie Harnovey, a middle-class chemical engineer. While Eddie is married, he has every nine years of his life run into Amanda, a former classmate from an upper-class background. Every time they are reunited, Eddie notices the subtle differences in their means. When Eddie finally misses a rendezvous, it will be to his detriment. Perlman’s novel had a major impact on Australian class and was later adapted into an award-winning film.

Black Rock, White City
The winner of the 2016 Miles Franklin Award, A.S. Patric’s Black Rock, White City is a rare Australian novel about the plight of its immigrants. It’s protagonist Jovan and his wife Suzana are resettled Bosnian immigrants now living on the outskirts of Melbourne. Jovan takes a job at a hospital and is soon tasked to clean its walls of reoccurring poetic graffiti messages. Jovan meditates on poetry, xenophobia, the tragic events that led to him and Suzana’s departure and the meaning of love after grief. Read our interview with A.S. Patric here.

* This guide pulls from preexisting listicles curated by Monique La Terra and Matthew Clark for Culture Trip. As these previous lists may include items not shown here, links to these pieces have been hyperlinked in section titles. Special thanks also to William Heyward and Sam Rutter.