The Best Restaurants in Brunswick, Melbourne 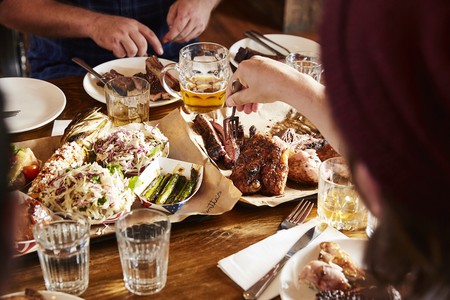 Fine dining is a little off-trend for bohemian Brunswick, but that’s not to say the local food scene lacks sophistication. Indeed, this cosmopolitan neighbourhood is bursting with culinary excellence. So, pull up a crate and tuck in those napkins as Culture Trip serves up the best of Brunswick eateries.

Gritty, understated Brunswick never takes itself too seriously, except when food’s involved, and then suddenly the snobbery is rife. In its defence, this bubbling cultural precinct is spoilt for choice, leaving restaurateurs competing on quality and cost.

“It’s more expensive to make a home-cooked dinner than it is to swing past Greenfields and pick up an 8 Australian dollars [£4.20] tofu rice noodle soup,” says local shop owner and vice president of the Sydney Road Brunswick Association, Jessica Tolsma. “Making dinner is for losers,” she adds bluntly.

Tolsma, who eats out “an embarrassing amount per week”, is well versed in Brunswick restaurants. She’s lived in the neighbourhood for more than eight years and hasn’t left a stone unturned. 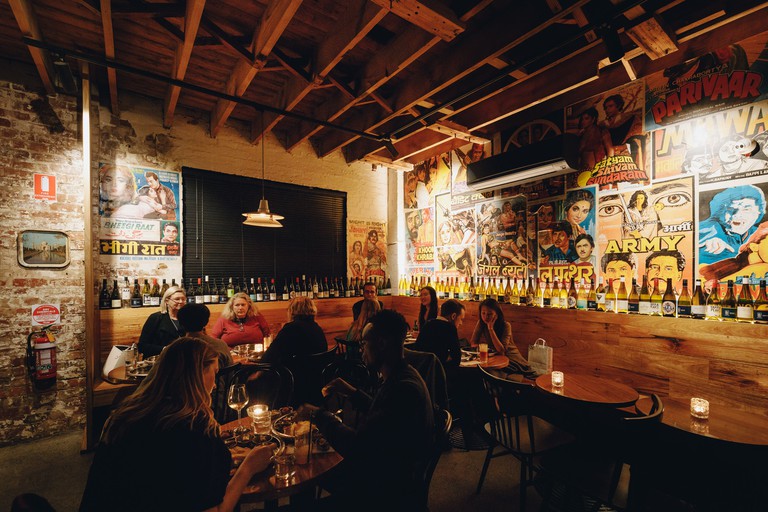 While it doesn’t actually sell bhang (the marijuana lassi, traditionally served at the Hindu festival Holi), Bhang is worth visiting for a taste of its relentlessly good curry. Created by the same owners as Asian street-food eatery Tom Phat, the warehouse-style restaurant rose to the top of this hit list when Tolsma labelled it an ambient date spot. The menu is thoughtful, with plenty of mild to spicy veggie and meat options. Apart from the feature lights accentuating old Bollywood movie posters, the venue is dimly lit, nailing a sense of anonymity in a fairly intimate space.

“I like a simple menu with flavours that make sense. Save your smears of pomegranate molasses for Instagram,” says Tolsma. If this resonates, The Brunswick Mess Hall is for you. The Sydney Road staple serves an extensive range of Asian tapas – tuck into a rich massaman curry or a fresh vegetarian platter. There’s a huge selection of beer, wine and cocktails to pair, and according to Tolsma, “the service is excellent, too.” 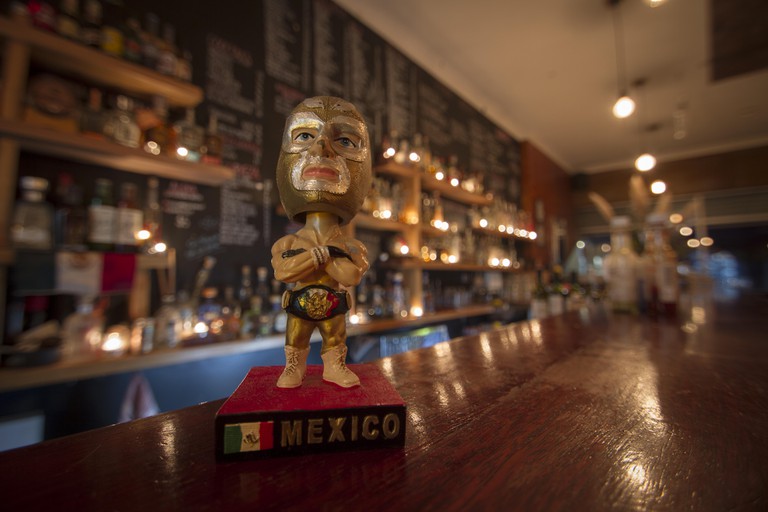 Tucked between concrete walls is Etta’s sleek, slim dining room. It hums with a low chatter from guests enjoying the pro-veg, mostly pescatarian menu. The interior features marble benchtops, textured timber floors and a few hanging lights – apart from that, it’s relatively unembellished. There’s no room for distractions where such detail is given to the food. The succulent seabream nestled in fennel and fermented tomato is delicious, but the more daring palate might opt for the bone marrow with fried bread and shallots. Both are flavourful and popular with residents who like to dine in style. 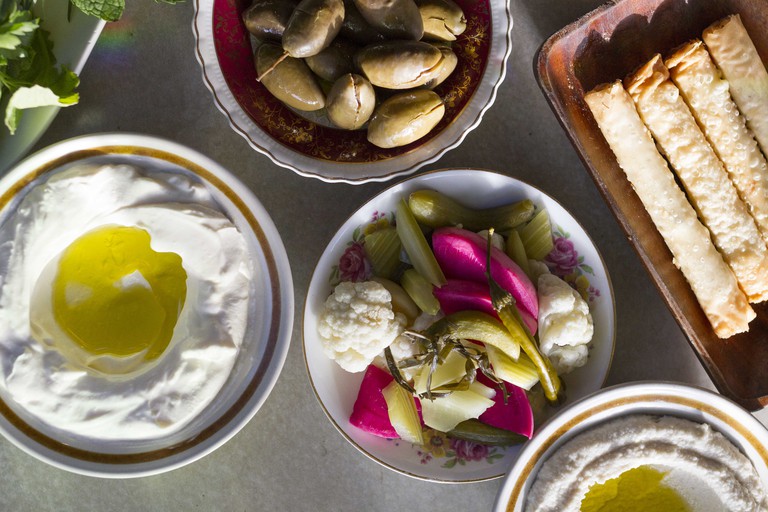 Paying homage to the Middle East, parts of Rumi’s menu has remained unchanged since opening in 2006 – “the Persian meatballs and crispy prawns in tahini sauce have kept their original recipe,” explains one of the staff. The broad, bountiful banquet menu includes eclectic wine matches and a selection of sweets that greet patrons at the end of their meal. Despite the venue’s ever-expanding clientele, Rumi has managed to maintain a homely vibe in its community. 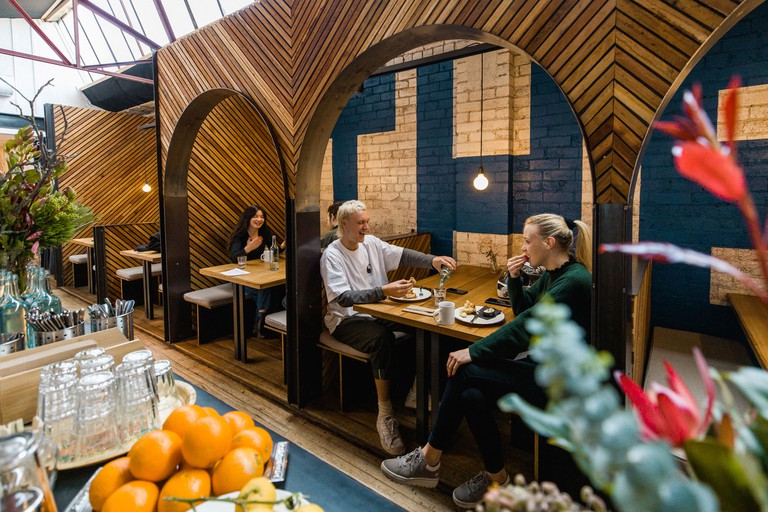 Theodore’s is a bit of an all-rounder. Even its slogan has trouble defining itself – “not a café, not quite a bar, but definitely everything in between”. For Theodore’s, the proof is in the pudding; after all, hybrid venues are what Melbourne does best. Its unassuming entrance gives way to a delicious array of grab-and-go options, plenty of booze and a message of sustainability. Many of the seasonal ingredients are pickled or strategically packed away to become year-round winners.

Bar Idda’s approach is simple – fresh produce and Sicilian zest. Here, the staff are friendly, attentive and happy to explain each dish. They’ll proudly point towards speciality dishes such as the pan-fried barramundi or trapanese with pesto sauce. But it’s hard to look past the slow-roasted lamb soaked in conza spice. At Bar Idda, it’s best to team up on orders and lean into a shared feast among friends. 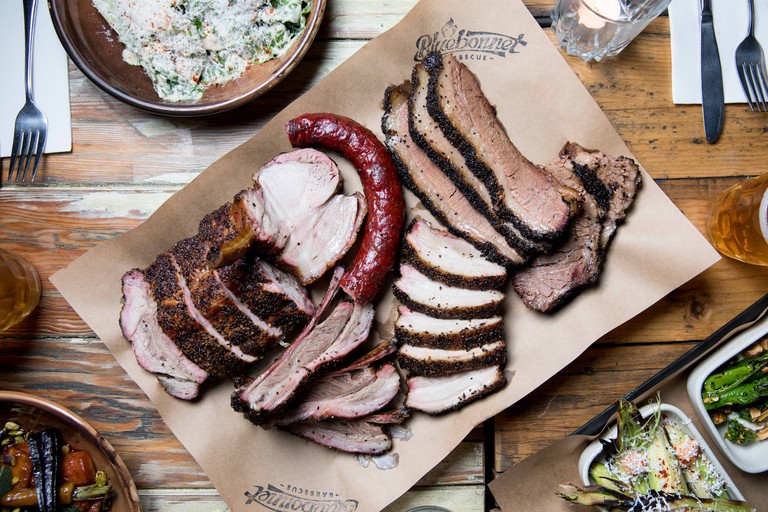 Taste Southern-style barbecue at Bluebonnet | © Kate Shanasy
When you sink your teeth into Bluebonnet’s smoked black angus beef brisket, you’re tasting two decades of hard-earned technique. Head chef Chris Terlikar is so serious about barbecue that he spent many 18-hour days honing the signature dish in his early career. Today, that legacy is honoured by the Brunswick-based team who whip up a mean rack of ribs and prepare home-made sausages daily. If the thought of slow, low and smokey Southern-style cooking tickles the taste buds, Bluebonnet is not to be missed.
Give us feedback