The Best Cafés For A Relaxed Cup Of Coffee In Sydney

Australia, as one of the largest coffee consumers in the world, has developed its own unique coffee culture. Sydney boasts coffee houses, roasters and educated devotees so enthusiastic that big coffee-chains don’t stand a chance over the skilled and passionate independent cafes. Take a coffee journey through the capital of New South Wales with our updated guide. 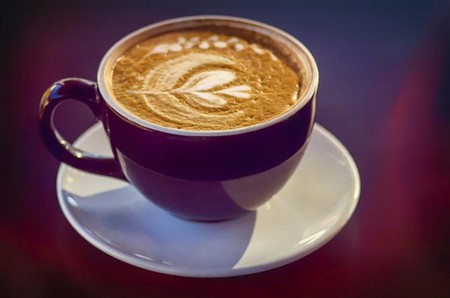 During the ’60s, espresso coffee grew quickly in popularity, and soon after Australians found themselves captivated, not only by the aroma, but also by the history and background of the beverage. Bringing with it the romance of exotic countries such as Brazil, Guatemala and Ethiopia, coffee had a certain glamour in an a rapidly globalising world. By the early 1970s coffee culture, if not café culture, was established in Australia. Joaquin Hernandez, a caffeine aficionado from Spain, decided to take advantage of this growing trend and share his passion for the bean at the same time, opening Cafe Hernandez in 1973.

Hernandez and his son ran two packed out branches of their café in Darlinghurst and Kings Cross, the latter open for business 24 hours a day, 7 days a week. Apart from introducing an early appreciation for the finer aspects of coffee preparation to Sydneysiders, pioneers like Hernandez introduced the concept of a café being a place for relaxation after work. This kind of no-fuss approach to coffee was the norm until the turn of the millennium, when new trends in coffee preparation began to appear. Outlets such as Toby’s Estate were at the forefront of this new wave of speciality coffees, while organisations like the Specialty Coffee Association gained traction internationally (Australian Paul Basset was crowned World Barista Champion in 2003).

This global movement encouraged those in the coffee industry to focus their approach to coffee preparation towards a more scientific and artistic level. Through much collaboration between farmers, suppliers, roasters, baristas and customers, people began to discover and appreciate the complexity in texture and aromas of different coffee blends that embody regional characteristics depending on the season, the climate and the altitude.

Today Sydney’s coffee scene, and Australia’s in general, is among the most dynamic in the world, with award-winning roasters, baristas and coffee-farmers converging on the city to taste and appreciate the brews. We recommend that you check out these top coffee shops to really get a flavour of Sydney’s love for a good cup of coffee. 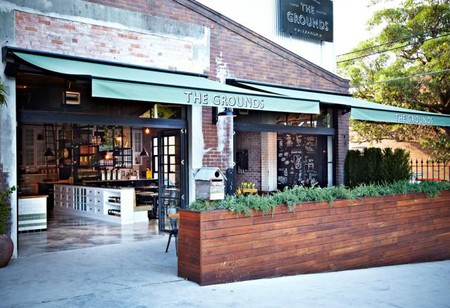 © The Grounds of Alexandria

The Grounds of Alexandria

Restaurant, Bakery, Australian, $$$
Facebook
Email
Twitter
Pinterest
Copy link
Share
Map View
Although coffee is at the heart of The Grounds of Alexandria, the place functions as a roastery, bakery and kitchen garden. Housed in a 19th century old pie house, it presents two distinct coffee areas, one for takeaway and one for in-house consumption, while the outdoor area contains a BBQ space, a florist and a children’s playground. Despite being set away from most city happenings, the Grounds of Alexandria manages to attract many people willing to make the journey by car or bus just to be a part of the buzz.
Open In Google Maps
7a, 2 Huntley Street, Alexandria, New South Wales, 2015, Australia
+61296992225
Visit Website
Visit Facebook page
Give us feedback

Gumption is the recently opened café from the creators of Coffee Alchemy in Marrickville. Priding themselves on 11 years experience in roasting, the owners have now brought their passion to the heart of Sydney’s CBD, in the Victorian Strand Arcade. Their coffee beans are carefully sourced from farmers to ensure that the best quality brew is available each season, which is something that wholesalers cannot guarantee. They are so serious about coffee that that is the only thing on the menu and, judging by the roaring reviews and the flow of people stopping by for a ristretto, that must be more than enough. 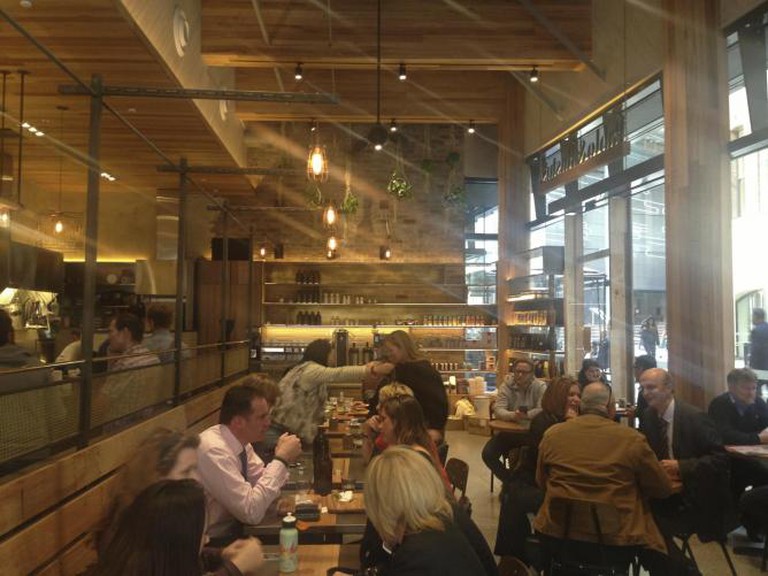 Le Monde Cafe, Surry Hills | © Pablo & Rustys (City Location)
For many years part of the trendy Surry Hills, Le Monde has earned the reputation as one of the best coffee-stops in town. Just a stone’s throw away from bustling Crown Street, this award-winning café joined forces with 5 Senses Coffee, which roasts Le Monde’s exclusive blend of coffee, in 2008 to strengthen their coffee culture. The cosy café is at the forefront of brewing technique experimentation and it uses some of the best coffee machines on the market. Aside from a well-priced food menu, the café offers a variety of coffees from different parts of the world.
Open In Google Maps
83 Foveaux Street, Surry Hills, New South Wales, 2010, Australia
+61292113568
Visit Website
Visit Facebook page
Give us feedback

Pablo & Rusty's, Castlereagh Street | © Mecca
With five venues spread around town, Pablo & Rusty’s is a long-standing player in the coffee movement of Sydney. The company has come a long way since the opening of its first suburban location in 2006. Its success derives from an unwavering commitment to speciality grade coffee and from offering its diners with seasonal, traceable and ethical products. Pablo & Rusty’s beans are roasted in smaller batches, allowing their roasting schedule to respond to their customers’ demands while also ensuring that every bean is prepared to maximise flavour.
Open In Google Maps
161 Castlereagh Street, Sydney, New South Wales, 2000, Australia
Visit Website
Give us feedback

The exquisitely decorated Paramount Coffee Project (PCP) features sweeping stone surfaces, stovetops, polished wooden sinks and immaculate coffee equipment. A favourite of the hippie crowd of Surrey Hills, Paramount Coffee Project offers a unique take on coffee; they purchase the latest lots of raw coffee, send them out to guest roasters and then serve the results. Customers can expect an ever-changing coffee offering thanks to the seasonality and variability of how coffee is treated from farm to cup. The café is populated all day long by locals, which makes it a perfect spot to take in the atmosphere of one of Sydney’s trendiest areas.

Perched up in trendy Surry Hills, Reuben Hills is as cool inside as out: decorated with fluorescent tube lights clashing, bare brick walls and reconstructed wooden tables, the uber cool coffee haunt is more comfortable than it sounds on paper. Owners Nathan Borg and Russell Beard have travelled extensively through South and Central America, where they visited farmers and set up direct trade arrangements for their coffee supplies. The menu boasts influences from Honduras and El Salvador. Upstairs, a 30kg Probat roaster churns out their signature blend of coffee beans, which are now used and enjoyed across the capital. A free coffee tasting is available every Friday morning for anyone that wishes to sample their latest blend creations.

Sensory Lab is a new addition by the St Ali’s folks to Bondi’s coffee scene. The menu offers some sweet and sour bites but it focuses mainly on coffee, which include brews from two-time-World Champion barista Matt Perger. The team behind Sensory Lab shows their dedication to coffee-making in all its forms, from roasting, serving coffee and uniquely packaging their products, which are available in the premises. The café features a minimalist layout and an industrial feel to it, with exposed pipes and folded felts on the wall. It is located only five minutes away from Bondi Beach but far enough to avoid the horde of tourists and surfers that populate the well-known beach. 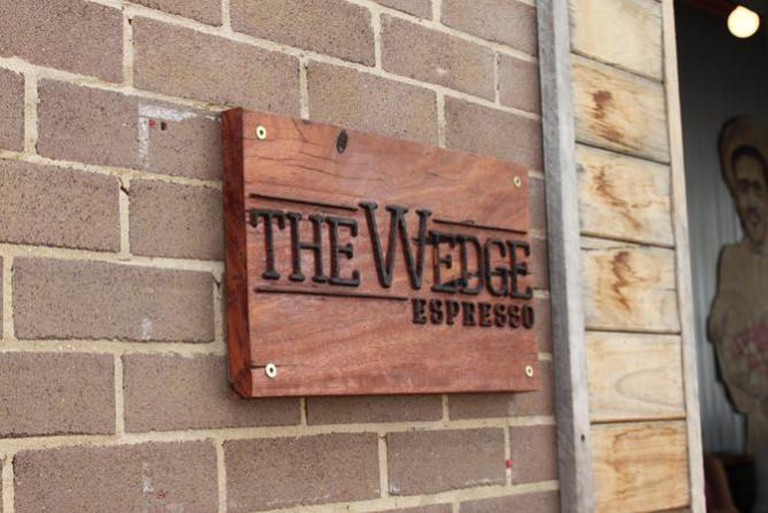 The Wedge | © Chunk Design
Proof that a great cup of java can be found anywhere in Sydney, the cosy Swallow Coffee Traders is located in Rockdale. Since its opening in 2010, the café has attracted a solid group of aficionados stopping by on their way to work or for lunch. Swallow Coffee Trader’s coffee culture goes beyond the mere social experience; it is more like a laboratory for coffee experimentation. Their beans are from the long-standing roaster/café Single Origin in Surry Hills. The owners study, research and test coffee as a passion, which goes beyond the mere running of their popular coffee shop. Peter and his team recently expanded next door to open a local deli stocking local foods from farms.
Open In Google Maps
1, 7 Tramway Arcade, Rockdale, New South Wales, 2216, Australia
+61295561576
Visit Website
Visit Facebook page
Give us feedback

Located in the funky and upbeat Glebe, The Wedge exploded onto the scene with a bang in 2011 and kept its customers hooked ever since. Founded by Toby Wilson, who previously worked at Le Monde in Surrey Hills, the small café focuses on communicating its passion for arefully selected beans, which are lightly roasted to retain the essential, less-bitter flavour of the beans. The Wedge also offers a small but delicious, seasonal food for both breakfast and lunch.