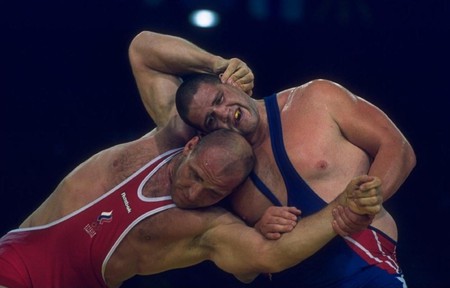 While sport often throws up huge shocks, few can compare to the son of a dairy farmer who toppled ‘the Russian Bear’.

Rulon Gardner gained a wrestling scholarship from the University of Nebraska-Lincoln and became a NJCAA national heavyweight wrestling champion in his sophomore year. He was a fine wrestler, but the Sydney games in 2000 were his first Olympics. When he reached the final he faced Russia’s Aleksandr Karelin, whose career, status and reputation was on another level altogether.

A rundown of the nicknames alone that Karelin amassed in his career provides an indication of the regard that he was held in. As well as the ‘Russian Bear’, the ‘Russian King Kong’, ‘Alexander the Great’ and ‘The Experiment’ were all used to describe the 6ft 3in (1.91m), 20st (130kg) giant.

Going into the Sydney Olympics, Karelin was a twelve-time European champion, nine-time world champion and three-time Olympic champion. The Russian hadn’t been beaten in 13 years of international competition – and six years had gone since he had even conceded a point.

According to ESPN, Karelin once ‘carried a refrigerator up seven flights of stairs’. He was the man that told reporters after one bout ‘I did not want to stop fighting for something as dainty as a broken rib.’

What made him stand out was his speed in comparison to his opponents. Fighting in the 130kg category (the heaviest weight class) meant there were very few that could match him for pace and conditioning. Karelin’s wrestling record going into the Sydney final against Gardner read 887 wins and one loss.

The ‘Karelin Lift’ became a staple throughout the Russian’s career. When an opponent would lie face down on the mat to avoid being thrown, he would lift them into the air and throw them into the ground. It was a move common in lighter weight categories, but virtually unheard of at heavyweight.

Gardner and Karelin had faced each other once before, in 1997. Karelin won 5-0, throwing the American onto his face three times. In Sydney, things went differently. Gardner survived the first round, avoiding Karelin’s attempts at his legendary lift. And then, in the second round, Gardner broke free of the Russian’s grasp. The officials watched the videotape repeatedly before deciding which wrestler deserved the point. They gave it to Gardner. For the remainder of the second round, and all of the third, Gardner simply held out.

No one could have predicted Gardner’s victory. He stunned the crowd. A living legend had been toppled. The American who put his strength down to ‘helping out on the farm as a kid’ had ended ‘The Experiment’.

Karelin retired soon after, his reputation still intact despite the defeat, but it was a blip on an otherwise immaculate résumé. The Russian is still considered the greatest wrestler in history, his career is testament to that, but this one contest was enough to make Gardner a hero. 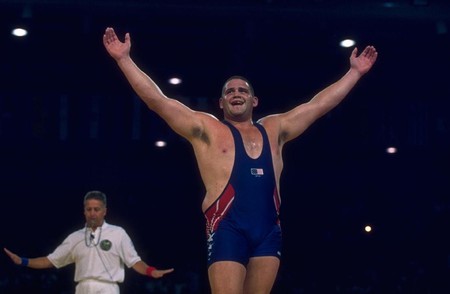 Gardner celebrates his win over Karelin in the final. | © 2000 / Allsport / STICKLAND, Billy

Away from the mat, Gardner’s life was nothing if not eventful. When he was in elementary school, his abdomen was punctured by an arrow in a class show-and-tell demonstration that went wrong. Later in life, two years after his Olympic gold, he fell into the freezing Salt River while snowmobiling in Star Valley, Wyoming. Unable to move any farther, Gardner built a shelter and waited to be rescued. He remained stranded for the next 18 hours until he was eventually found. Gardner suffered hypothermia, severe frostbite and lost a toe when his frozen boots had to be sawed off. That same toe is in a jar of formaldehyde in Gardner’s refrigerator.

In 2007, Gardner was in a light aircraft that crashed into Lake Powell, Utah. He, along with two other men, swam for an hour to reach the shore before spending the night outside, without shelter. Incredibly, none of the men involved suffered any long-term injuries.

For most, these stories would be the talking point of their life, the moment they single out. For Gardner, these are the supporting acts. They are undoubtedly interesting, but the night he brought down ‘King Kong’ will be how he is best remembered.