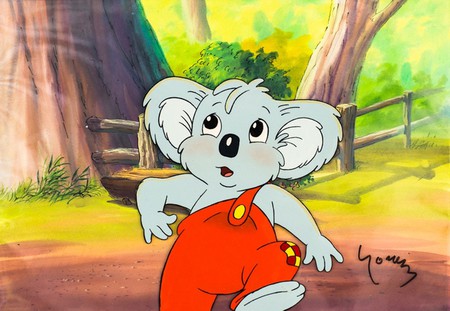 The 1990s was a golden era for Australian television thanks to a wave of weird and wonderful television programmes, including heaps of cartoons that children of the ‘90s will remember fondly. Tap into that nostalgia with this list of nine memorable Aussie cartoons from the era.

This children’s programme presented a number of big-name cartoons but the real star of the show was a little furry puppet with a big red nose and an even bigger mouth. Named after the Aussie slang word for ‘aggressive’, Agro lived up to his title with a crude, abrasive sense of humour at the expense of a string of unsuspecting female offsiders — fans will remember Ann-Maree was the original and the best. Check out this adults-only highlights reel on YouTube for all the politically incorrect jokes that sailed over your head as a kid.

If your parents were generous enough to let you watch TV before school, you began your weekday with a big bowl of Cheez TV (or you had to suffer through Aerobics Oz Style when you woke up before 6.30am). Hosts Jade and Ryan dished up great cartoons on Channel Ten between 1995 and 2004 — and they’ve revived the brand on Facebook over the last couple of years, posting full eps of the original show as well as all things ‘90s nostalgia.

The Adventures of Blinky Bill

Introducing the Aussie kids cartoon par excellence. Based on the legendary character created by author Dorothy Wall in the 1930s, The Adventures of Blinky Bill — produced by Yoram Gross from 1993 to 1995 — is the most famous iteration of this mischievous anthropomorphic koala, much loved by generations of ABC viewers for a quarter of a century.

Later in the decade, Yoram Gross turned his talents to another iconic Australian character: Skippy the Bush Kangaroo. Unfortunately, this cartoon can’t hold a candle to the 1960s live-action series, nor The Adventures of Blinky Bill, Gross’ other ‘90s creation that clearly inspired this pale imitation. No surprise that cartoon Skippy only lasted one season on Channel Nine (1998-99).

Li’l Elvis and the Truckstoppers

Meet Li’l Elvis, a rockstar orphan from the country town of Wanapoo — a.k.a. Little Memphis — who’s convinced he’s the illegitimate son of ‘The King’ himself. The red-headed crooner teams up with his didgeridoo-playing Indigenous mate Lionel, and his Asian-Australian friend Janet on the drums to take their tunes all over the Australian outback.

This long-running programme isn’t just beloved by ‘90s babies, it entertained Australian children for a mammoth four decades between 1959 and 1999. Mr Squiggle himself is a marionette puppet with a pencil sticking out of his face — imagine a slightly creepy blue-haired version of Pinocchio who inexplicably commuted from the moon in a rocket ship each episode — that cheerily turned doodles into cartoon masterpieces with the help of his assistants.

This Nickelodeon classic is in no way Australian — but with a wallaby in the titular role, we’re going to claim it. Rocko is an Aussie immigrant (despite his terribly unconvincing accent) to O-Town where he befriends Heffer the cow, Filburt the turtle and his dog Spunky. Aficionados can look forward to a TV movie in 2018, which is sure to be brimming with all the adult innuendo that ‘90s children missed as kids.

Okay, not strictly a cartoon, but no article about nostalgic ‘90s Aussie TV can finish without mentioning a rat called Rattus, a cat called Modigliana, Derryn the dopey dog and Mixy the mixed-up bunny. The Ferals graduated from their original home in the backyard of a university share house to their own television channel, in five-minute spots known as Feral TV.