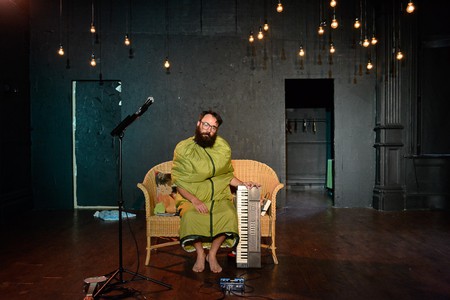 Before Us l © Stuart Bowden

Australian comedian Stuart Bowden is the name on everyone’s lips around Southbank lately. This is due to the success of his current one man comedy show titled, ‘She Was Probably Not A Robot.’ The show has been running since March 23d at The Malthouse Theatre on Sturt Street, as part of the 30th Melbourne International Comedy Festival. Famous for wearing a foil hat during his show, keep reading to find out why.

Victoria born Stuart, was raised on a dairy farm in Southeast Gippsland, and becoming a comedian wasn’t something he’d always planned. He describes it as being a gradual progression:

‘I knew in high school that I wanted to do something creative, and I was also a bit of a class clown. I messed around a lot but I also really enjoyed performing. I studied at ‘uni’ to be an actor – I went to drama school. I always thought I’d just be an actor, but then I started writing my own stuff and the thing that I enjoyed most was storytelling and comedy.’

‘I like sharing my playfulness and inviting the audience to be involved in imagining the world that I create, I like connecting with audiences through laughter, I think that is a really powerful and important thing.’ 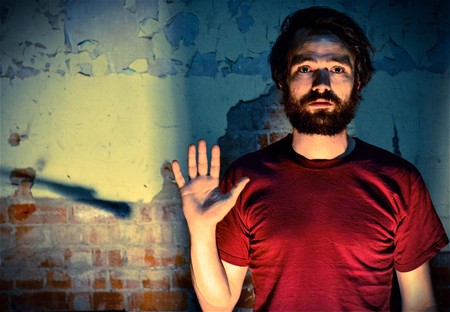 The Man Behind The Masks l | © Stephanie Brotchie

His first solo show was called, ‘Dances With Worms’, and it’s not something he talks about too much. He describes it as being completely dark, strange and absurd. The show involved him being onstage with a large stuffed worm suspended from the ceiling. The worm’s name was Wanda, and she was his girlfriend. The show was made up of him and Wanda telling various stories and singing songs to the audience. Having seen Stuart’s style of storytelling through his performance in ‘She Was Probably Not A Robot’, it’s clear that he has not strayed from his roots, as he still uses the same mediums to entertain and deliver his material. It’s a very unique way of telling tales, and Stuart’s characters production and energy keeps the audience captivated the whole time, which is a difficult task for one man with minimal props and technology.

The thing people find most alluring about, ‘She Was Probably Not A Robot,’ is Stuart’s use of atmospheric sounds to add more depth to the story. The only instruments he used were a small keyboard, a loop pedal, and his mouth to set an appropriate tone for the backdrop to each scene. 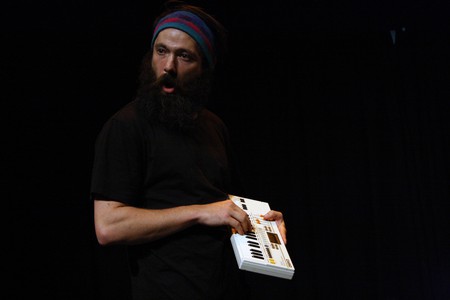 Stuart’s success has meant he has been able to tour the world with his shows. Since 2011 he has performed on stage over 300 times in numerous cities of eight different countries. His first international show was, ‘The World Holds Everyone Apart, Apart from Us.’ Between 2012 and 2014, he toured many cities across Australia, New Zealand, and many countries in Europe, with his, ‘The Beast,’ performance. He followed that up by performing his 2015 show ‘Before Us,’ in even more locations around the world.

Stuart has been performing his fifth and current show, ‘She Was Probably Not A Robot’ since 2013 and taken it all around the world. It is during this run that he has made his performance debut in Southeast Asia. Most of his show’s start with a simple idea: a character, a short story, or even just an image. A recurring character type is that of an outsider, or misfit, and someone who has different perspectives on the world. These types of characters help the audience connect to his shows, as they can relate to aspects of the characters.

Before Us l | © Stuart Bowden

‘Coming up with ideas for a show is easy though,’ Bowden says. ‘It’s a pretty big leap of faith to invest in a new idea and spend months and months making it into a show, it’s a big scary risk. Especially when the risk includes wearing a tinfoil box and being an alien or bouncing around on an air-mattress pretending to survive the apocalypse – it’s a long-shot.’

Wearing a tinfoil box on his head has definitely been a successful leap for him, his lovable character Celeste is effortlessly funny. Her mannerisms, and speech patterns are simple, and yet truly hilarious. She is that friend that we all have, that is always funny without meaning to be. He describes the creation of the character in this way:

‘When I decided I wanted to do it in Edinburgh for the fringe, I needed an image to go in the brochure so I cut a hole in a cardboard box then covered it in tin foil and took some photos. As soon as I put the box on I started playing the character of Celeste, so that character came out of me just messing around with a box on my head.’

‘She Was Probably Not A Robot,’ came together initially because Stuart liked the idea of someone surviving the end of the world, by floating out to sea on an air mattress. By testing out the rest of his idea during his 10 minute sets in comedy nights, and variety shows, he eventually was able to put a show together. 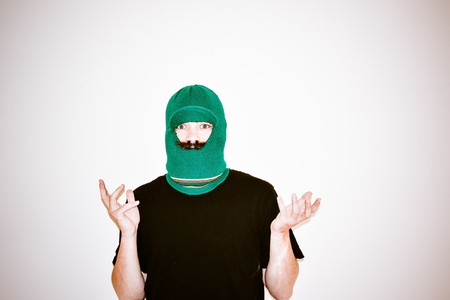 The backdrop for this story is the end of the world. This brings quite a daunting and devastating realisation to the surface when watching particular scenes, but despite this dire theme flowing through it, Stuart manages to get a balance, and creates a great deal of comic relief to a taboo and often quite realistic content. The main thing he wanted the audience to take away from the show, apart from sore cheeks from the laughter, was a desire to enjoy life and mess around. He says that, ‘underneath all of that silliness there is a pretty strong message about climate change and caring for our environment and each other – but mostly it’s just about prancing around.’

The whole show is skillfully crafted. Between the quiet monologues, which cause a lump to form in your throat as you fight back the tears, Bowden uses brilliantly timed comic relief, causing the tears to subside. During the show, not a single eye or ear strays from the storyline as he performs his heart out night after night.

He states that, ‘my favorite, and probably what I think are the funniest moments aren’t when a joke is set up, and delivered perfectly; but more when something happens that no one could see coming, not even me, something that is spontaneous and unrepeatable and kind of indescribable.’ 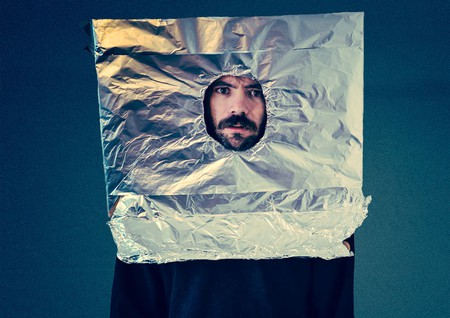 Unfortunately the, ‘She Was Probably Not A Robot’ show’ run in Melbourne ended on Sunday April 17th, so Stuart plans to take it to Auckland for the New Zealand Comedy Festival, and then to Manchester in England, for the Flying Solo Festival. After the madness of touring ends, he plans to take a year or so off from performing, so he can revise some of his older work. But don’t worry if you missed him this time round, he will be back on the stage in Melbourne, and you won’t want to miss him again, so make sure you keep your eyes and ears open for the name, Stuart Bowden.

Ash is a British national, currently spending her time in St. Kilda where she can be found pursuing her intense passion for writing. When not writing Ash can be found volunteering at a multitude of charities. Find her at ashfrancisseagrave.wordpress.com