Dragons, Dothraki, and Fire: Making a 'Game of Thrones' Battle 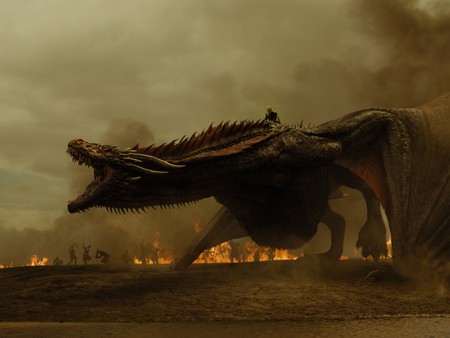 How do you film a scene involving hundreds of warriors on horseback on one side, an army on the other, and a dragon in the air raining fire down on the battlefield? With a lot of preparation, a great deal of expertise, and a fantastic visual effects team.

Warning—spoilers for Game of Thrones season seven ahead.

In episode four of the seventh season of Game of Thrones, a Dothraki horde, Daenerys Targaryen, and her dragon Drogon attack a Lannister force, beginning a sequence that sees several major characters narrowly avoid their doom, and a lot of not so lucky extras burned to death.

Visual effects company Iloura, which was involved in season six’s “Battle of the Bastards”, returned to the show this year to help out with the “Loot train” scene.

“There were quite a few similar technical challenges to Battle of the Bastards—large crowds, lots of horses and incidental effects, but there were quite a few differences too—the Dothraki fighting style adds a layer of complexity, especially with their trick riding which required a lot of key-framed animation to match the live stunt performers,” says Iloura VFX Supervisor Josh Simmonds.

“Probably the main difference is the huge amount of Pyro FX to contend with—both practical and CGI elements that needed to sit comfortably together, and of course Drogon’s explosive dragon fire. Also, “Spoils of War” was a larger sequence for us—the shot count was around 200 compared to 140 on “Battle of the Bastards,” he adds.

Iloura had around 100 crew working on the sequence for around seven or eight months. This is a similar level of resources used on feature work, according to Simmonds. The scale of the work undertaken by Iloura can be seen in the video below.

Game of Thrones “The Spoils of War” breakdown (Season 7, Episode 4) from Iloura on Vimeo.

One of the trickier parts of the work was making digital doubles of the Dothraki riders. Conventionally, the doubles are used to make an army look bigger, but they’re in the back of the shot. In this case, they had to be more apparent.

“There were a couple of shots where they were front and center, which leaves very little to hide behind. It also requires amazing artists across all disciplines to really nail it, and the team really rose to the occasion,” says Simmonds.

“We also had some seriously amazing practical explosions from the on-set pyro team which we had to match—one strafing shot in particular had our CGI explosions sitting right next to filmed elements.”

Iloura isn’t involved in the effects that bring the dragon Drogon to life—he’s animated by Image Engine – but the team still worked on the dragon fire and lighting the airborne beast in their shots. Although the dragon didn’t present too many problems for Iloura, Simmonds jokes that he suspects the catering requirements on set for fully grown dragons are perhaps “much more onerous than for horses.”

Game of Thrones has redefined the scale, budget, and ambition of TV productions. The show pushes the boundaries of the format in visual effects as much as any other. “I think the level of production value across all facets of the show are incredible, and obviously its popularity allows HBO to push things further with every season,” says Simmonds. “I think Joe Bauer and Steve Kullback (VFX supervisor and VFX producer) have been instrumental in defining what’s possible for VFX in the TV realm, and their understanding of the entire production process is evident in the quality of footage, on-set data and extensive practical elements we receive to work with.”