The Top 10 Restaurants In Sydney

Sydney Opera House with city in background ©Corey Leopold
Australia’s culinary culture is relatively unknown when compared to its Pacific neighbors and European settlers. With its multicultural population and young identity, modern Australian cuisine encompasses a wide range of dishes created through a freedom in creative license. We look at 10 of the best Australian culinary experiences in Sydney, highlighting their cultural prestige and artistic merit.

Transporting its guests to Japan through both its creative, delicate dishes and its stunning design, Tetsuya’s is renowned for serving the best Japanese food in Sydney. Chef and owner Tetsuya Wakuda has previously been awarded the prestige of three chef hats 17 years in a row and has especially designed a ‘test kitchen’ in the restaurant to continue his exploration of gastronomy.

Awarded three chef hats every year since 2004, Est has been catching the attention of restaurant goers with its creative menu of contemporary Australian cuisine. The backbone of Est’s luxurious dishes is head chef Peter Doyle. Regarded as one of the most significant figures in modern Australian food, Doyle brings imagination, experience and artistry to the table through every dish served.

Priding itself on being Australia’s most beautiful dining room, Rockpool Bar & Grill is set within an American-style art deco skyscraper, designed by Emil Sodersten in 1936. This awe-inspiring aesthetic continues through to the interior design, with its high ceiling and beautiful marble pillars. Meticulous with quality, head chef Neil Perry dry ages the restaurant’s beef on the premises, allowing Rockpool Bar & Grill to consistently serve some of Sydney’s best steaks.

Moo provides outstanding burgers in a more relaxed, iconic Australian setting. Facing Sydney’s famous Bondi Beach, visitors can enjoy their specialty burgers such as the 100 per cent kangaroo, or the double decker wagyu beef. Moo also prepares a range of shakes and cocktails, making it a perfect lunch spot for those hot Sydney beach days.

Restaurant, Australian
During a select season of the year Gastro Park combines culinary innovation with popular culture with its Game of Thronesinspired menu. Each of the five courses pays homage to climatic moments in HBO’s popular TV show through both aesthetics and flavour. Outside of this event, the restaurant prides itself on serving artistic meals inspired by the concept of ‘old meets new’.
Looks like it's closed Hours or services may be impacted due to Covid-19
More Info
Open In Google Maps
5-9 Roslyn Street, Potts Point NSW, 2011, Australia
+61280681017
View menu
Visit website
Visit Facebook page
Send an Email
Give us feedback

Set under the sail-inspired architecture of the Sydney Opera House, Bennelong is the best place to enjoy award-winning dishes before seeing a show. Guests can indulge in fusions of contemporary French and Australian cuisine while admiring the blissful views of the surrounding Sydney Harbour, Royal Botanic Gardens, and Circular Quay. Exactly 18 months after the doors closed on Guillaume Brahimi’s Bennelong in 2013, chef Peter Gilmore and restaurateur John Fink re-opened in 2015 for the first official customers to walk through the door after a multi-million dollar refit. 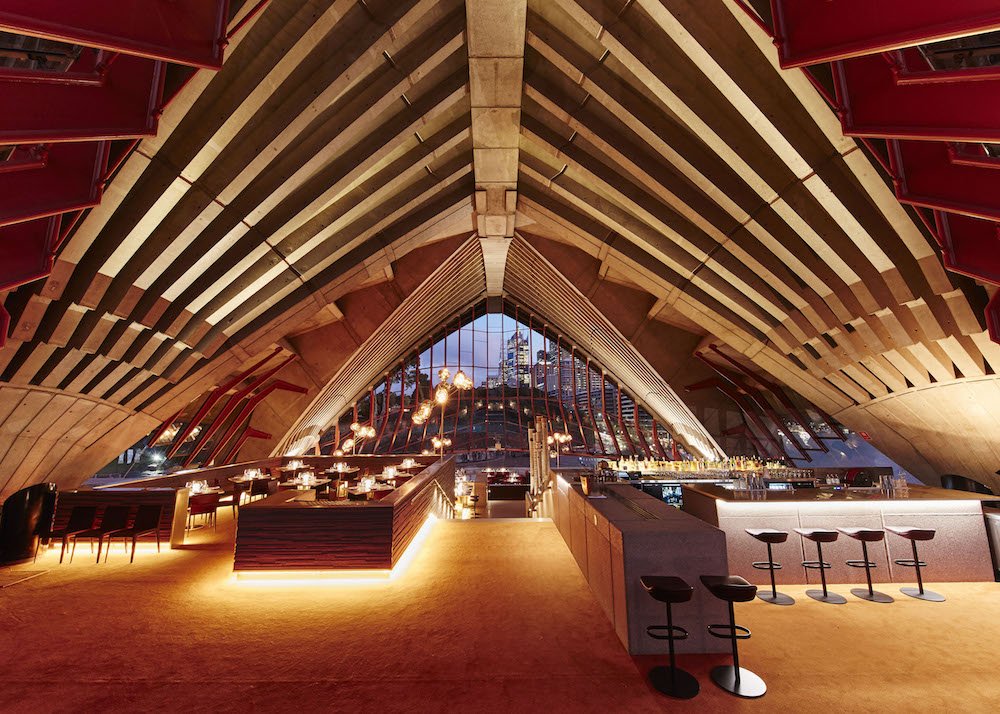 Set under the sail-inspired architecture of the Sydney Opera House, Bennelong is the best place to enjoy award-winning dishes © Courtesy of Bennelong / Brett Stevens