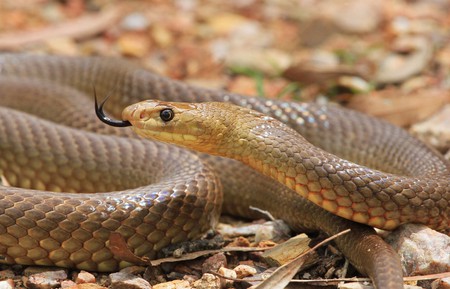 Australia is notorious for being a menagerie of deadly creatures. With approximately 170 snake species slithering throughout this great southern land–of which 100 are venomous–it’s easy to see why. However, despite the fact that Australia is home to the top three most venomous snakes in the world, only two to four fatalities occur each year, compared to 11,000 in Asia. Regardless, it’s important to stay alert to avoid provoking an attack. Sink your teeth into our list of the 10 most venomous snakes in Australia, including the inland taipan, eastern brown snake, and tiger snake.

Found along Australia’s east coast, all the way from far north Queensland and down through New South Wales, Victoria and continuing into South Australia, the Eastern Brown snake is responsible for approximately 60% of fatal snake bites in Australia. Adults can grow to two meters and are known to be swift and aggressive. Eastern Browns are also considered to have the second-most venomous bite of any terrestrial snake. When threatened, this snake will raise its body off the ground, creating an ‘S’ shape. 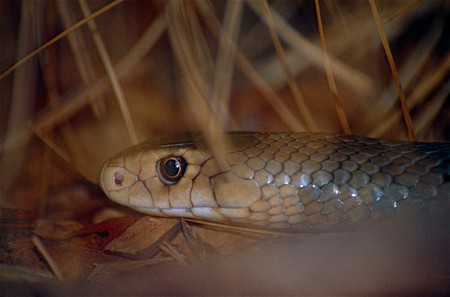 Also known as the Gwardar, the Western Brown snake is widespread across Australia. It favours dry habitats as well as eucalypt forests, woodlands, and grasslands. While its venom isn’t as potent as its eastern cousin, the Western Brown delivers a bite with three times as much venom, triggering nausea, headaches and abdominal pain in humans. Cats and dogs can experience paralysis. 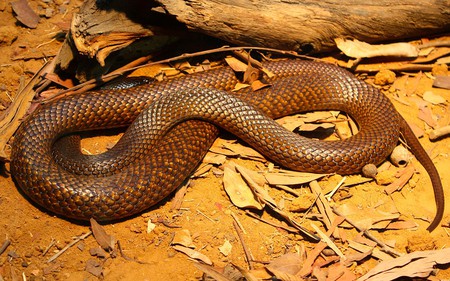 Variations in colour and pattern can make the tiger snake difficult to identify, but as their name suggests, they are usually striped. Found throughout southern parts of Australia, including Tasmania and Bass Strait coastal islands, the Tiger Snake has a highly neurotoxic venom that if left untreated has a mortality rate between 40 and 60%. Tiger Snakes are also a protected species in most Australian states. 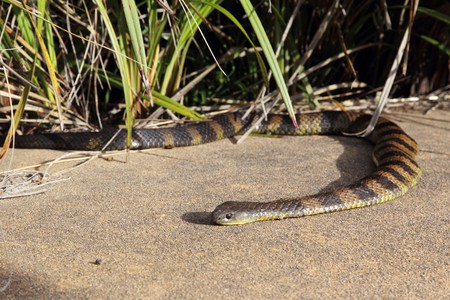 Estimated to have enough venom in each bite to kill more than 100 men, the Inland Taipan is considered the most venomous snake in the world. However, this serpent is characteristically reclusive, placid and unlikely to attack. It inhabits remote, semi-arid regions in Queensland and South Australia. Encounters with the Inland Taipan are so rare than until 1972 they were considered a mystery species to the scientific community.

In contrast to its timid cousin, Coastal Taipans are an aggressive species and have the third most toxic venom of any terrestrial snake in the world. Found in northern and eastern parts of Australia, Coastal Taipans can grow up to two metres and are equipped with the longest fangs of any Australian snake, at 12mm. When threatened, the Coastal Taipan will ferociously strike, injecting a neurotoxin that rapidly causes headaches, nausea/vomiting, convulsions, paralysis, internal bleeding and kidney damage. 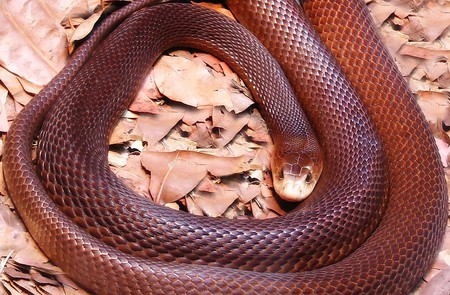 Serving the fastest strike in the world, the Common Death Adder is an ambush predator capable of delivering a lighting fast attack in less than 0.15 seconds. Found in Queensland, New South Wales, Victoria, South Australia and southern coastal regions of Western Australia, the Common Death Adder reacts to a threat by freezing and camouflaging into its environment. They are recognized by their broad triangular head and stout body, and possess the longest fangs of any Australian snake. 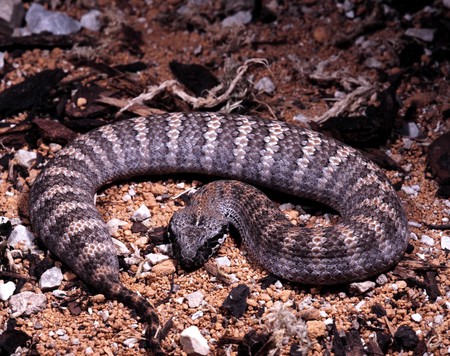 Frequently encountered along the east coast of Australia, the Red-Bellied Black snake is less venomous than other elapid Australian snake, and despite victims requiring immediate medical attention, bites are rarely life-threatening. Red-Bellied Black snakes are often found in bushland and woodland, but more commonly reside near dams, streams, and billabongs. They are even capable of staying submerged underwater for up to 23 minutes. 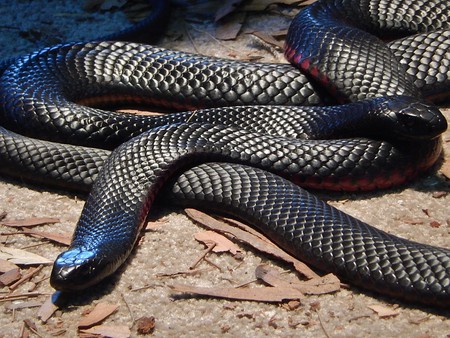 At three meters long, the Mulga snake is one of the longest venomous serpents in the world. Also known as the King Brown snake, the species actually belongs in the genus Pseudechis (black snakes). Found in every state except Victoria and Tasmania, Mulga snakes have a relatively weak venom; however, they can deliver a huge 150 milligram dose in one bite and are known to hang onto and chew victims as they inject their venom. 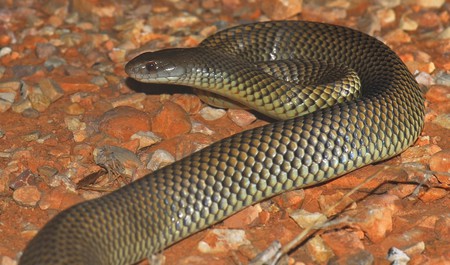 Not to be underestimated, the small-eyed snake may only be 50cm long, but their venom contains a long-acting myotoxin that continues to attack muscle tissue days after penetration. Populating mesic hinterland regions of eastern Australia, the small-eyed snake is secretive and you will rarely encounter it during the day. They are also reluctant to strike, and only one fatality has been recorded. 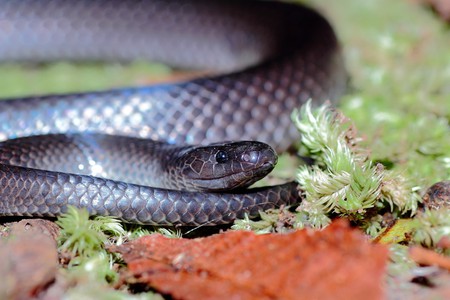 Unlike many snakes, Lowland Copperheads have adapted to colder climates and are the only venomous species found above the snow line. They also dwell in low vegetation zones of southeastern Australia and Tasmania, preferring areas next to water. While the lowland copperhead generally avoids confrontation with humans, if cornered they will strike. However, they are slow to move and seldom bites, with only a dozen bites on record and one fatality. 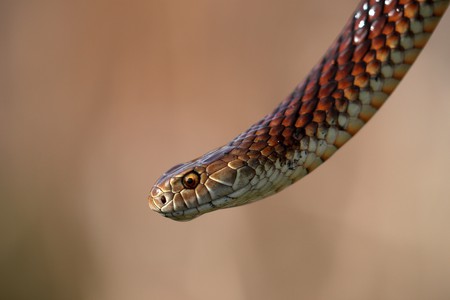