Arts West Opens At The University of Melbourne 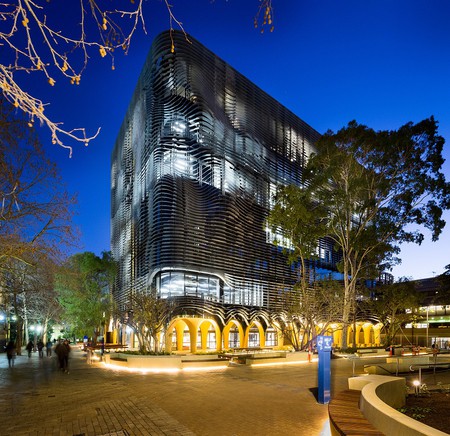 The University of Melbourne’s faculty of arts has a new home that has opened for semester two teaching. The six-storey building joins several existing buildings, including the Old Arts ‘Clock Tower’ Building at the Parkville Campus in North Melbourne. ARM Architecture and Architectus collaborated on the $66 million project, which features 24 new diverse learning spaces, including an interactive theatre, media laboratory and a digital studio complete with digitisation facilities, immersive monitors and specialised, state-of-the-art software.

The objective of The Arts Faculty is to provide students completing their Bachelor of Arts, an undergraduate degree with more than 30 majors across humanities and social sciences, with innovative media experiences and small-group learning. Many disciplines, including archaeology, will allow students to engage with cultural artefacts from the university collections.

Each floor has been assigned a different theme, and among the quirky features are wall coverings inspired by Vivienne Westwood and other decorative themes including 16th century design. Undulating through the atrium is the main staircase, which leads to the upper levels and the basement lecture theatre. There are also plans in place for Arts West to include a direct walkway to the Baillieu Library.

Arts West will include a climate-controlled gallery displaying objects and artefacts from the university’s Cultural Collections, as well as a landscaped garden and two upper-level terraces occupied by plants native to the southern hemisphere including the Spotted Gum (Corymbia maculata), Ombu (Phytolacca dioica), African Holly (Elaeodendron croceum) and Peruvian Pepper (Schinus molle).

Design-wise ARM Architecture and Architectus incorporated five images taken from the university’s Cultural Collections into the façade. The images were selected for their representation of ‘the intellectual, cultural and historical traditions’ held by the Faculty of Arts. When speaking about the images, Peter Bickle of ARM says ‘they reflect the output of human endeavour from around the world and they allude to the concept of object-based learning, which is used throughout the Faculty of Arts.’ The chosen artefacts include a textile from India, an ink artwork titled ‘Ceremony with Buckley and sailing-ship‘ by Tommy McRae intended to emphasise a place of Indigenous knowledge and culture, a ceramic pot dating back to 420 BCE titled ‘The Amykos painter,’ and two bronze statues. The surging galvanised steel fins were engraved with the selected images, which are ambiguously concealed and exposed depending on where one stands and weather conditions.

Arts West sits adjacent to the Old Arts Building and is now open to students.