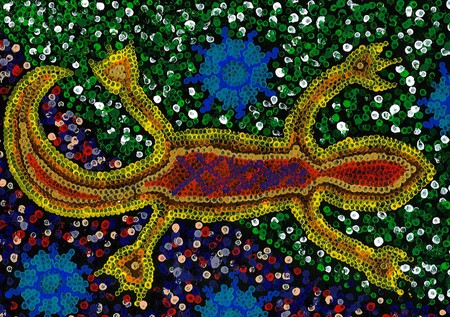 Descended from the first people to leave Africa up to 75,000 years ago, Australian Aborigines are one of the longest-surviving cultures in the world. Evidence of this culture can be traced back through the distinctive practice of Aboriginal art, following specific mediums and methods to produce the work. Aboriginal art can be characterized by a meticulous set of symbols and intricate iconographies standing as a written language for the people. This language depicts stories of the Dreamtime; the art stands as a direct expression of their understanding of the cosmos.

In Aboriginal mythology, Dreamtime is the term for the animist belief system and cosmological framework in which the Aboriginal people negotiate their lives. In animism, it is understood that all non-human entities possess a spiritual connection, from animals and plants to inanimate objects. The Dreamtime denotes a space, described by anthropologists as being ‘everywhen’. This out-of-time space is inhabited by ancestral figures, not quite treated as gods, they do not have significant influence over the material world, but are understood to have supernatural abilities of sorts.

The Dreamtime is an integral element in explaining conception and reproduction. It differs from group to group, but for many Aborigines such as the Tiwi in Northern Australia, the Dreamtime is where the spirit child waits to become dreamed up as a pregnancy by the father. The ancestrally connected spirit is culturally understood to enter the developing foetus during the fifth month of pregnancy. For this group of people, the reality of the dream is privileged above that of the empirical; their cosmological understanding is entirely different to that of a Western belief system. Animistic beliefs perceive bodies as part of the wider environment- including time- where every person essentially exists in the internal dreaming. Australian Aborigines envisage a cyclical understanding of existence; people are literally tied to the land because it gave birth to them and return to the Dreamtime when they die.

Aboriginal mythologies and cosmological frameworks such as these are the primary subjects for expression in all Aboriginal art. Even contemporary art is based on ancient stories. However, artists require permission to paint or track particular stories, as entitlement to them is based on kinship and descent. The stories and sacred elements of the narratives are handed down through families and taught through the art. They are inherited. Traditional Aboriginal artists may not paint a story or mythology that does not belong to them through a family lineage, as they often contain secret or sacred information. 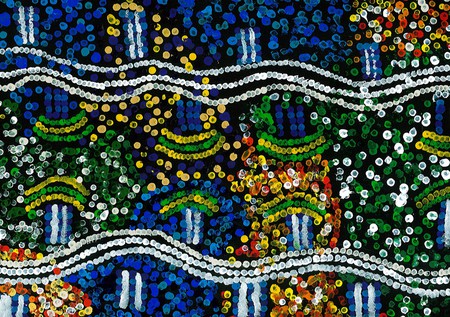 Aborigines do not possess their own written language. Instead they use intricate and varied symbols or iconographies in their artwork, denoting different ideas. They obviously vary from group to group, but the meanings also vary in whether the story is being told to adults, children, initiates or elders. These stories are central to their identity and cultural heritage and are expressed through the art work. 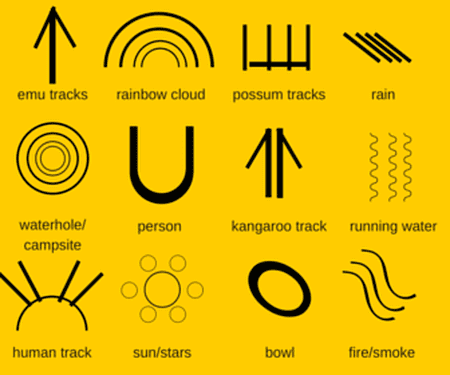 Traditionally, artwork was painted on rocks, walls or often the body itself as part of a ceremonial process. One of the oldest forms of Aboriginal art is painting on bark, yet the paints have a relatively short life on such a material and the bark itself disintegrates in a fairly short period of time. The oldest recorded form is a charcoal drawing of rock art, known to be 28,000 years old. This was found in Northern Territory and is one of the oldest pieces of rock art on earth with a confirmed date.

It is also common to draw stories in the form of symbols in the sand or dirt. It is only in the past 40 years or so that stories have been recorded in the form of art on canvases and boards. Ochre paints are also common, but again have a very short life span. Although having moved on from the traditional preparation of only using natural earth pigments and vegetable or animal binders, the paints still need a substantial base to paint on effectively. 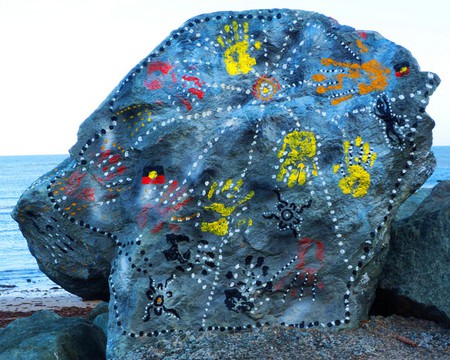 Traditional Aboriginal art is instantly recognisable with a number of distinctive features. There are key methods and styles used to create this iconic imagery. Examples include cross hatching, more common in Northern Australia, is understood to give the piece great spirit and power in the crossing of such fine lines; the most well-known and iconic method of Aboriginal artwork is dotting. It is done supposedly to distort sacred information and keep secret private and unauthorised knowledge; bigger and repetitive circles are also evident in artwork, as they are important sources of water for the Aboriginal people. Living in such a harsh environment like the desert, aspects of survival are quite often at the centre of focus. 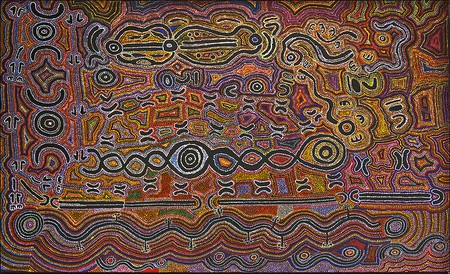 As an expression of cosmological understanding, this type of art is often used to teach. Although it can be interpreted in a variety of ways depending on who is receiving it, the visual stories often work to teach younger generations about Aboriginal mythology and culture in general. A lot of the artwork contains strong behavioural and educational aspects and is used similarly to how stories like Aesop’s Fables are used in the Western world. The narratives are used to highlight information or a moral.

Although Aboriginal art has sparked interest in the Western world in relatively recent years, it is in fact one of the oldest forms of material culture. Under this premise, it qualifies for both galleries and museums, with both artistic and anthropological merit. Through the beautiful and intricate patterns evident in Aboriginal art, the most sacred of ideas live on.