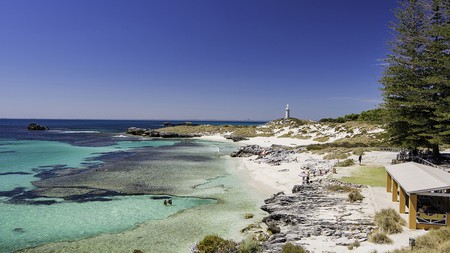 Rottnest Island is an unspoiled tropical paradise less than 20km off the coast from Perth, and a haven of world-class beaches and bountiful wildlife – including the iconic quokkas: cat-sized kangaroo lookalikes that hop all over this pristine nature reserve. Only a 25-minute ferry ride from Fremantle or a 45-minute ferry ride from Perth’s Hillarys Boat Harbour, Rottnest is an easy day trip from the West Australian capital. Here’s our list of Rotto experiences to tick off. 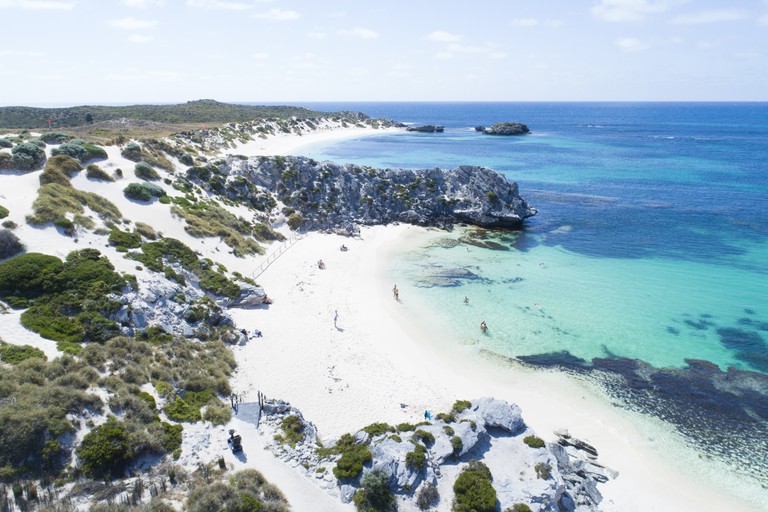 Rotto’s biggest drawcard is its selection of stunning strips of sand. With 20 bays and 63 beaches, Rottnest Island boasts weeks worth of swimming, snorkelling and surfing spots. Little Salmon Bay and Parker Point, as well as the 13 shipwrecks buried around the island, are diving hotspots – grab a snorkel set from the Pedal and Flipper rental shop just south of the ferry terminal. Strickland Bay is a surf hotspot, and there are too many gorgeous places for a dip to name. “There’s white sandy beaches, warm water, tropical fish and coral that you don’t find on the mainland,” explains Georgia Gunther from Charter 1 boat tours, which connects the city with this sun-kissed oasis. “This is thanks to the Leeuwin Current that brings warm water from the north. It does not pass close enough to Perth, only around Rottnest – this is what makes the island so special!” 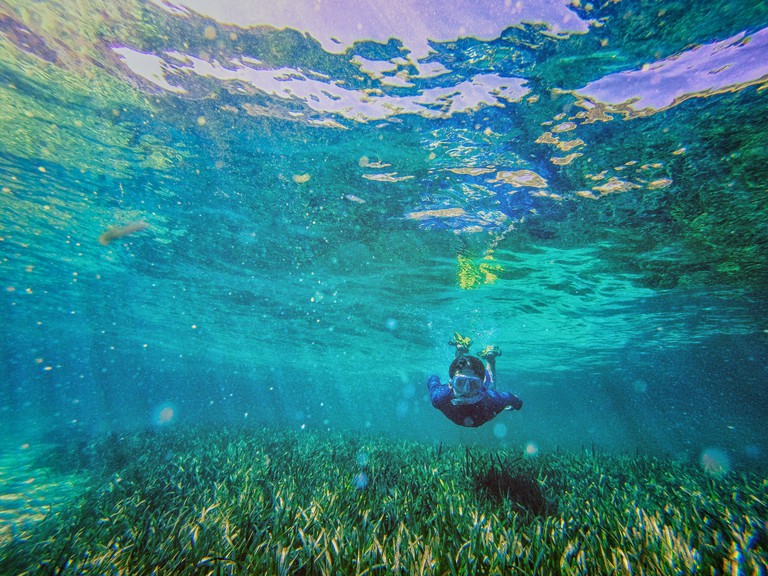 The fastest way to check out as many of these beaches as possible is a tour of Rottnest Island, such as Charter 1’s many cruises. Their sunset sail serves glasses of bubbly while the sun melts into the Indian Ocean. Three-hour snorkel tours cruise from Thomson Bay to Rotto’s top snorkel spots. And a 12.5m (41ft) luxury catamaran hosts private charters normally reserved for Hollywood A-listers like Chris Hemsworth and Matt Damon.

Hop on a bike 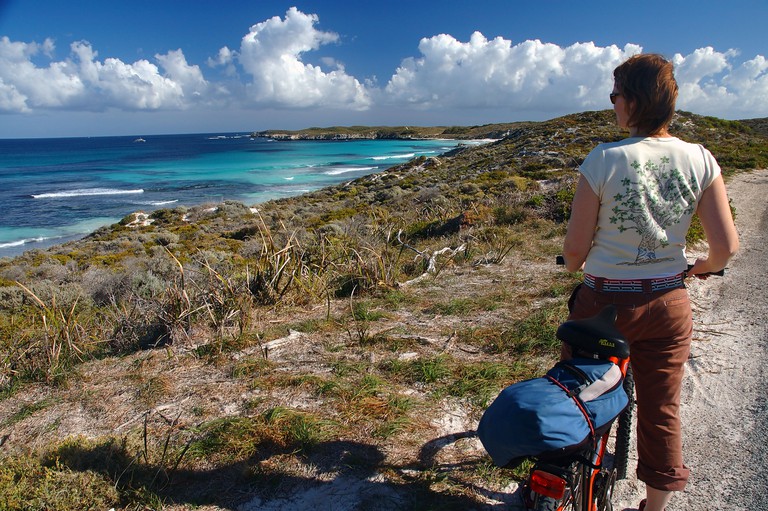 A slower – yet no less spectacular – way to navigate Rottnest is on two wheels. The island is virtually car-free, and with 22km (13.7mi) of cycling trails criss-crossing this limestone landscape, bikes are the best way to get around. As well as connecting the accessible swimming spots around the Thomson Bay settlement, paths lead all the way to the less-developed West End, where the Cape Vlamingh viewing platform gazes out over the Indian Ocean. Pick up a pair of wheels from Pedal and Flipper near the wharf. The Wadjemup Bidi walking trail – 45km (28mi) of hikes broken into five chunks, each linking different inland lakes and coastal headlands – unlocks more of the island. 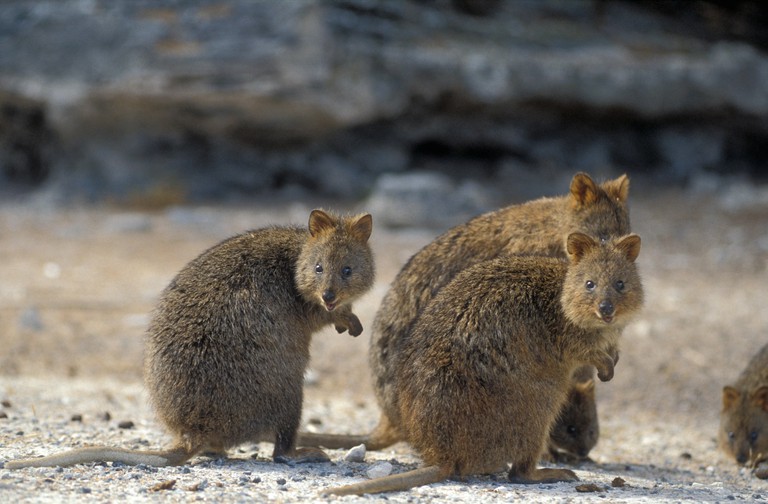 Rottnest is a Class A reserve – the highest protection possible – meaning the place is brimming with animals both in and out of the water. Quokkas aren’t only the symbol of the island, but they gave it its name: Dutch explorers mistook the marsupials for giant rats when they sailed past in the late 17th century, dubbing the land “rat’s nest”. The furry little fellas are unique to this part of the world, and shuffle all over the place – just resist the urge to feed them. Rotto also houses the critically endangered Gilbert’s potoroo, fur seals at Cathedral Rocks and rare osprey near Parker Point. In the water, more than 30,000 humpback and southern right whales migrate to and from Antarctica between April and November – often visible from the West End Boardwalk – while there are more fish than could fit into a Finding Nemo sequel. “Rottnest is a tropical underwater playground,” Georgia says. “Spot more than 120 species of tropical fish and keep an eye out for colourful coral, dolphins and Australian sea lions.” 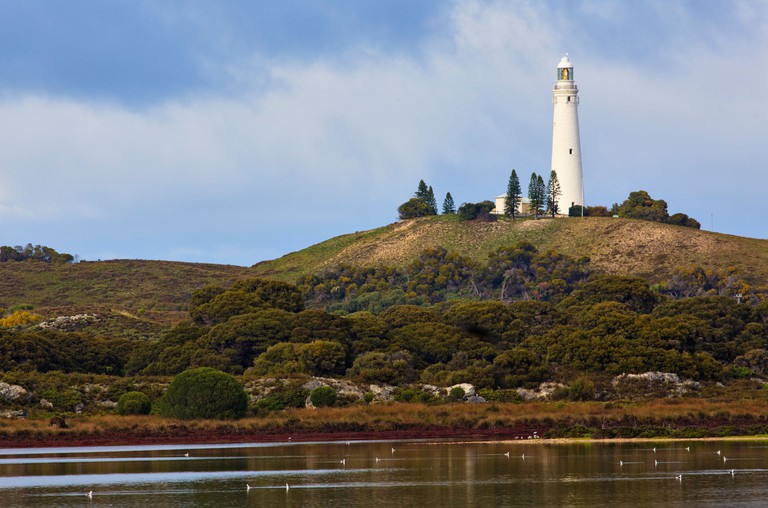 Rottnest tallied 65,000 years of indigenous history before its first European contact in the late 1600s, then British colonisation in 1829. The island has been used as a penal colony, internment camp and military stronghold at various stages, leaving a trail of historic buildings to discover. Wadjemup Lighthouse offers 360-degree views over the Indian Ocean, tunnels burrow beneath the World War II gun emplacement on Oliver Hill, and Lomas Cottage, Pilot Boat House, Vincent Way and the Salt Store are other pitstops for history buffs. “The Rottnest voluntary guides do some great tours about the history of the island,” advises Georgia – check their schedule at the visitor centre near the wharf.

See Rotto from the sky 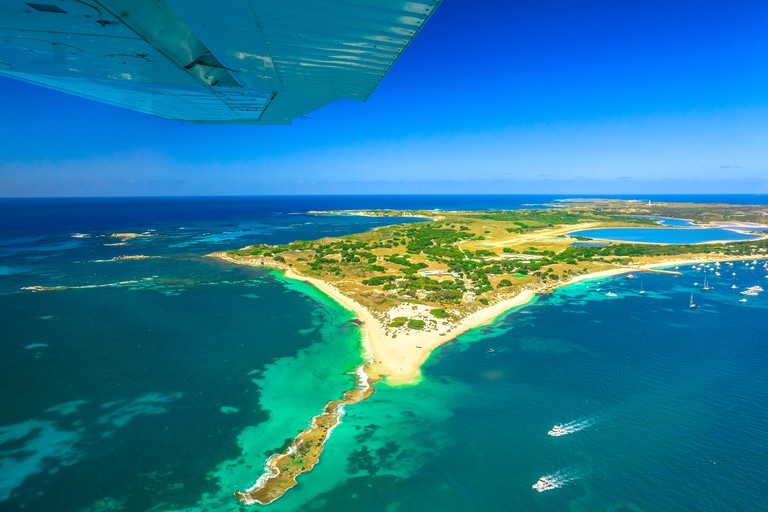 Seaplanes, joy flights and plenty of other light aircraft take off from Perth and the Swan River before zooming over Rotto. But the even more unique perspective on the island is hurtling towards the sand at the speed of gravity. Skydive Geronimo is the only island skydiving experience in Western Australia, taking off from Rottnest’s small air strip then landing on one of Salmon, Thomson or Bickley Bays, depending on conditions. “Rottnest from the air is amazing,” Georgia says. “Fly over to the island on a plane, helicopter or seaplane.” 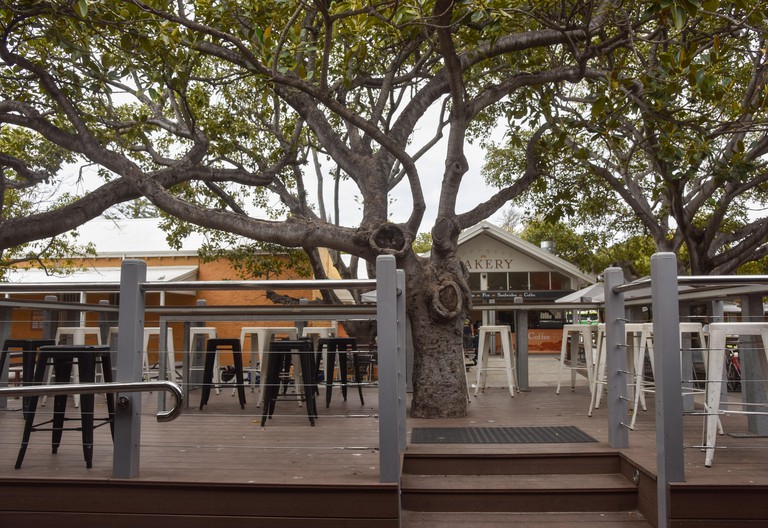 Only 300 or so people live on Rottnest full time, while the population swells to about 15,000 in summer. That means the culinary scene is no match for cosmopolitan Perth, but there are still plenty of nice spots for a meal, particularly around Thomson Bay. Hotel Rottnest plates up pub grub and pints on the sand, Thomsons Restaurant boasts an equally enviable waterfront location, and Frankie’s on Rotto serves crowd-pleasers for breakfast, lunch and dinner. But Rotto’s most cherished eatery is a humble bakehouse. “Rottnest Bakery is famous for its pies!” Georgia says, recommending the organic pastries, fresh-baked bread and legendary jam-and-cream doughnuts. 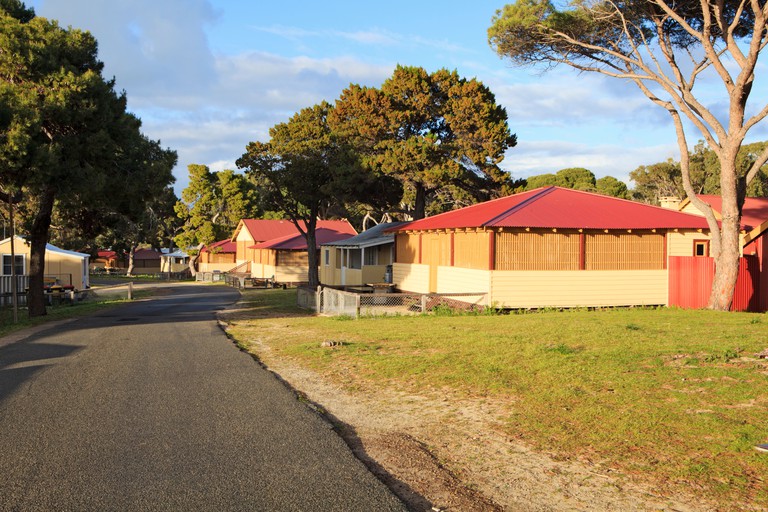 Although meeting a quokka, splashing around Thomson Bay and demolishing a meat pie can be squished into one day, Rottnest really deserves longer than that. In terms of accommodation, spartan campsites, cabins and converted barracks used to be part of the charm of sleeping on Rottnest, but a new wave of bungalows, hotels and other retreats have been added to these old-school digs. “Discovery’s new glamping tents are gorgeous for accommodation,” says Georgia. “To really immerse yourself in the island, I recommend you spend a night – we also offer live-aboard charters on board Capella.”

Great Location
Give us feedback