Located in a ferny inlet of Mt Dandenong is the William Ricketts Sanctuary. A place for reflection and contemplation, the park features close to 100 sculptures illustrating the way in which ‘all life is one.’ William spent 60 years living in and working on his ‘Forest of Love’, and today, the sanctuary demonstrates the affinity he had with the Aboriginal people and their culture.

William Ricketts was a naturalist, environmentalist and sculptor who dedicated much of his life to exploring the connection that Aboriginal people have with the natural world. Born in Richmond, Victoria in 1898, William Ricketts, or Bill as he preferred to be called, worked as an apprentice jeweller and violinist for cinema orchestras, before settling in Mt Dandenong in 1934. 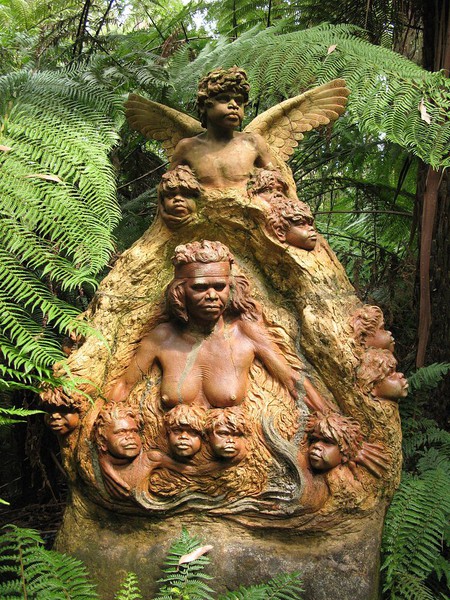 Between 1949 and 1960, Bill frequently visited Central Australia, living with the Pitjantjatjara and Arrernte Aboriginal communities. It was their traditions and the ways in which they respected Mother Nature and all of her creations that inspired Bill to adopt their philosophies and, in turn, create a sanctuary of art.

In 1964, the William Ricketts Sanctuary opened to the public, and later that decade, the Victorian Government bought the sanctuary, vowing to protect the sculptures and surrounding landscape. Bill died in 1993 at the age of 94.

Scattered throughout the mountain ash trees and tree ferns are 92 ceramic sculptures depicting Indigenous people and their relationship with Mother Nature. William Ricketts’ work is closely integrated with natural rock formations and tree trunks as a reminder of the connection people have with the earth. Another theme touched upon is the devastating impact that European settlement had on the natural Australian landscape. There are also many smaller sculptures hidden in the nooks of rocks, and at the foot of the sculptures are concentric circles representing the beginning of all life.

Bill modelled each sculpture after the likeness of a real person, and among his most notable works are the Atirantuka Winged Figure and the depiction of his spiritual self alongside a lyrebird totem. 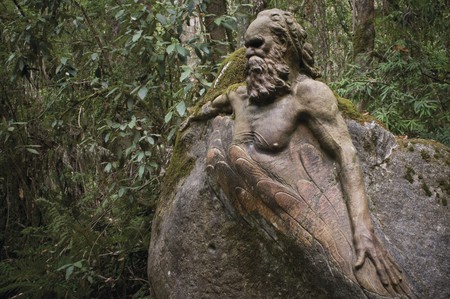 Harmoniously positioned throughout the sanctuary are archways, grottos and streams, all of which deepen the sense of tranquility.

Upon beginning the 500-metre journey, visitors will see an Inspiration Plaque which reads: ‘In all this sanctuary there is one theme only expressing reverence for life in the new world environment.’ This is the first of many handmade plaques along the path, all of which include an observance made by Bill.

‘Man is nature’s masterpiece, therefore claim your inheritance by giving her the co-operation you owe.’ – William Ricketts