A Brief History Of The Melbourne Cricket Ground 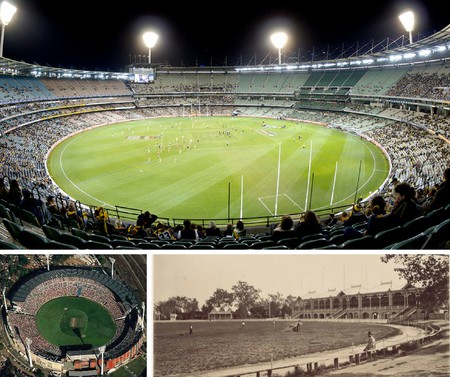 The Melbourne Cricket Ground (MCG) was established by the Melbourne Cricket Club in 1853 – less than 20 years after Melbourne was founded. The first members stand was built in 1854 and, in 1861, a public grandstand capable of holding 6,000 people was constructed. ‘The G’ as it is known, is the home of Australian sport and is used for the Australia Football League (AFL), cricket, and rugby matches. The MCG was the centrepiece of the 1956 Olympic Games and 2006 Commonwealth Games, and is home to the National Sports Museum. The stadium welcomed Pope John Paul II in 1986 and Queen Elizabeth II in 1954, 1970 and 2006.

The first trial game of football at the MCG was played by police officers in 1869, but it wasn’t until a decade later, with the formation of the Victorian Football League (VFL), that the first official game of football was played on the now-hallowed grounds. The MCG was originally home to the Melbourne Football Club, the league’s oldest club, and has since been the home ground to Richmond, North Melbourne, Essendon, Collingwood and Hawthorn. Every VFL and AFL Grand Final has been played at the MCG since 1902, except in 1924, 1942–1945 and 1991. The Grand Final takes place in late September or early October, and is watched by upwards of two million home viewers, with stadium seats sold out year after year.

The stadium hosted its first cricket match on the 30th of September 1854, and soon after Test Cricket was born, followed by One Day International cricket matches a century later. The MCG also held the Cricket World Cup in 1992 and 2005. The first Boxing Day game was played in 1866 by an Indigenous Australian cricket team, and in 1995 the Boxing Day Test began and has since become a beloved Melbourne tradition.

The MCG is located in Yarra Park within walking distance of Richmond and Jolimont stations. The stadium is surrounded by AAMI Park, Rod Laver Arena and Hisense Arena and is close to the city centre.

The MCG is not only Australia’s largest sporting facility, but it is also the biggest in the southern hemisphere. In the 1970s the stadium was often overcrowded, with 120,000 people squeezing in at times, but the number exceeded 130,000 during the Billy Graham evangelistic crusade in 1959. The stadium was also crammed during the 1970 VFL Grand Final, with a crowd of 121,696. Today, due to updated occupational health and safety legislation, the maximum capacity is 100,024.

The MCG has hosted the rugby union, the State of Origin series, FIFA World Cup qualifiers in 1997 and 2001, lacrosse, as well as tennis and cycling in the nineteenth century.

Aside from its role in the sporting community, the MCG has played a part in military history, and hosted charity events and concerts. During World War II the MCG transformed into a camp for US Marines, the US Air Force and the Royal Australian Air Force. During this time over 200,000 personnel were stationed at the MCG and the stadium was given the nickname Camp Murphy. The MCG has also staged concerts by Paul McCartney, U2, Madonna, David Bowie, The Rolling Stones, Michael Jackson, the Three Tenors, Elton John, Billy Joel and, in 2017, Guns N’ Roses is due to perform there. Charity concert Sound Relief also took place at the MCG, and in 2010 the grounds were the starting point for The Amazing Race Australia.

The National Sports Museum is a dedicated place celebrating Australian sport and the history of the MCG. The museum contains 3,500 items on display across various exhibitions, including the Australian Gallery of Sport and Olympic Museum, three halls of fame, interactive experiences, holograms of Shane Warne and James Hird and several temporary exhibitions.