Nicolai Michoutouchkine, a French artist of Russian origins, painted and collected Pacific art for more than 60 years. He was a restless, fervent promoter of the arts and crafts of this under-represented region until his death in 2010. Discover the life and work of this influential figure. 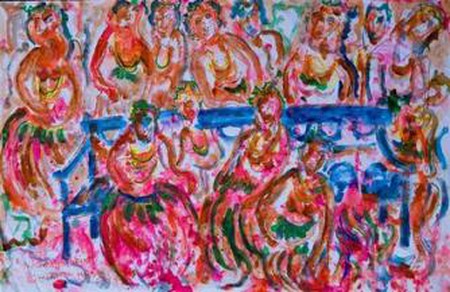 Nicolai Michoutouchkine studied in Paris, at the Académie de la Grande Chaumière in Montparnasse. Following the completion of his diploma, he embarked on a grand tour of the world that lasted four years, during which he visited countless countries. However, in 1957 the French authorities reminded him that his military service was overdue and he had to move immediately to the nearest French post: New Caledonia. From 1957 to 1969, Michoutouchkine served as the secretary of the Governor of New Caledonia Mr. Grimald in Nouméa.

Following his military service, Michoutouchkine moved to Vanuatu where he remained for the rest of his life. From then on, he frenziedly started acquiring Pacific art through his trips to the local islands, including the Solomon Islands, Papua New Guinea, Tonga, Fiji and the Rotuma Islands, Wallis, Austral and the Marquesas Islands. Throughout the years, he succeeded in building a collection of more than six thousand native artefacts such as household utensils, paintings, traditional tools, traditional clothes and weapons, fishing accessories, sculptures, engravings, musical instruments, cult objects, ornaments, architectural features, and a selection of other exquisite objects. Thanks to his determination and his curiosity, Michoutouchkine was able to collect rare and precious pieces that he found in remote locations. 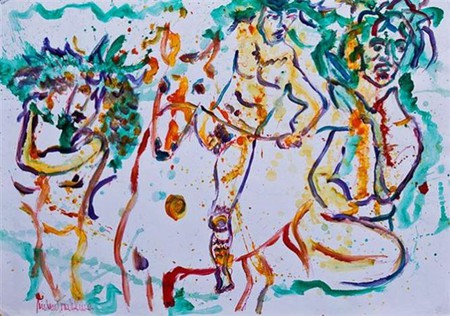 Meanwhile, the artist met his lifelong partner and ‘twin brother’, the artist Aloi Piloko from Futuna Island. Piloko shared his companion’s passion for Pacific arts and together they founded the N.Michoutouckine, A.Pilioko Foundation in 1977 at Esnaar, Port Vila. This institute became a cornerstone for the preservation and promotion of the cultural heritage of the Pacific SIDS (Small Islands Developing States). It hosted dynamic events and workshops for local artists and actively fostered an awareness of indigenous arts. Today, parts of the collection are still being exhibited across the world in an effort to carry on the legacy of Michoutouchkine. In 2006 for instance, the foundation lent 400 objects from its collection to the popular Balinese Museum Pasifica in Nusa Dua, for no less than ten years.

Michoutouchkine’s talent and energy were rewarded when he received the prestigious French medals the Chevalier des Arts et des Letters in 1975 and the Chevalier de l’Ordre National du Mérite in 1980. His death in 2010 was greeted with great sorrow across the Pacific islands. The artist spent his entire life ‘in pursuit of the sun’; he now leaves a legacy that has illuminated Pacific art for the rest of the world.