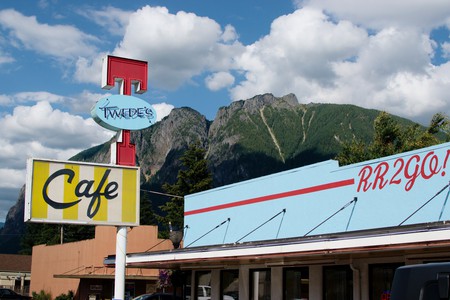 When it first aired, the now-cult classic Twin Peaks drew attention as an unusually dark, obscure addition to weeknight television. Not just for its plot and setting either – a cast of eccentric characters like the Log Lady and Nadine Hurley would eventually go on to hold cultural meaning in television history. But the show’s most notorious character was its lead, Special Agent Dale Cooper.

While the full cast reveal a gaggle of dark secrets hidden within the small town, Agent Cooper reveals a dark past beyond the world of Twin Peaks. Specifically, the real-life mystery of D. B. Cooper: a 1971 extortionist who hijacked a plane and disappeared in the Pacific Northwest without trace.

It happened on a Wednesday – November 24, 1971 to be exact. It was the day before Thanksgiving and airplanes sat packed with holiday travelers on the tarmac. A man, whose one-way ticket read Dan Cooper, boarded a plane heading to Seattle, Washington from Portland, Oregon. Similar to the Twin Peaks lead, Cooper wore an average black suit, a white shirt, dress shoes, long overcoat, and black tie.

To the average traveler, Cooper looked harmless. That is, until after ordering a bourbon and soda, he handed a note to the flight attendant explaining he had a bomb. Cooper wanted $200,000, and he wanted it all delivered in $20 notes. It wasn’t just the money he was after either, Cooper also requested four parachutes and a fuel truck so he could make a quick getaway after receiving the money.

HAVE YOU SEEN THIS MAN?! Find out why he is important in Episode 7 of What a Way To Go (its a podcast) 👀

When the plane arrived in Seattle, Cooper swapped the passengers for the stolen goods. But he kept a few flight crew members behind. After the passengers disembarked, Cooper ordered the plane to take off again, this time towards Mexico City, and most importantly, to stay below 10,000 feet. When he was far enough away, somewhere over the Cascade Range in southwest Washington, Cooper jumped, never to be seen again.

D. B. Cooper isn’t even the hijacker’s name. To make matters more confusing, the FBI isn’t even sure where the initials originated from. Cooper’s plane ticket clearly read Dan. But reporters ran with the mistake, and soon the man behind the crime deemed one of the greatest unsolved mysteries of all time, became a media epitaph. Investigation into the whereabouts of the air pirate went on for decades, and despite a small piece of evidence left behind on the plane and an in-depth facial description, the case remains unsolved.

The test I did today wasn't as good as the one I did yesterday… even I think I am going to fail that subject so… I just want to finish them all and start Twin Peaks again… PS: sorry for my short feeds of these days, but as I said, the June 15 I will be back, back and ready!

The FBI may not have found D. B. Cooper, but Twin Peaks creators David Lynch and Mark Frost did. Like the famed hijacker, Special Agent Dale Cooper, dressed in similar attire, enters a third dimension when he travels into the Cascade Range, and an even further dimension when he gets trapped in the Black Lodge.

What separates the two men is their fate – Agent Cooper made it out of the forest and the real-life hijacker’s fate remains a mystery. D. B. Cooper’s case was finally closed in July 2016, almost a year before Twin Peaks: The Return aired on Showtime.