A Brief History of the Skagit Valley Tulip Festival 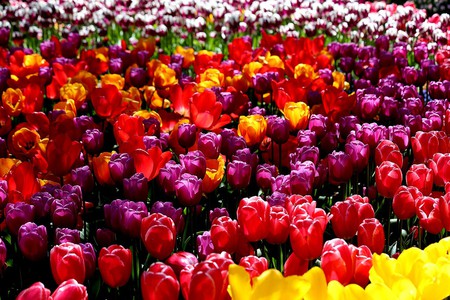 With Seattle ranked as having the second most depressing winter in the U.S., spring may be the state’s most welcomed season.

As the blue sky finally pushes through the wet, grey clouds, people make their way in droves to the outdoors. And the first stop Washingtonians usually make is the celebrated Skagit Valley Tulip Festival.

As its name suggests, the festival sits in the Skagit Valley fields of Mount Vernon, a small town an hour north of Seattle. Spanning the entire month of April, the celebration witnesses hundreds of thousands of people who flock to the area to catch a glimpse of the festival that boasts more than one million blooming tulips, irises, and daffodils.

It’s not just Washington residents either. According to the festival, the fields saw visitors from all 50 states and 93 foreign countries in 2016. By the looks of it, visitors wouldn’t know that it took some years before the fest finally found its rhythm, more than a century to be exact. 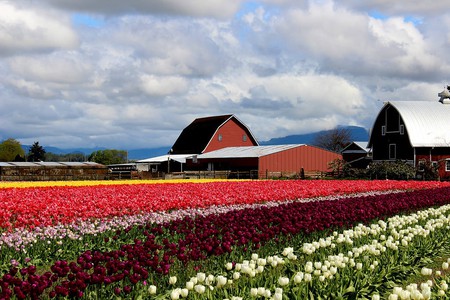 Tulips weren’t introduced to the United States until the mid-19th century and not to Washington State until the tail end of the 1800s, thanks to a man named George Gibbs. Gibbs, an immigrant from England, made his way to the States at the age of 17 and settled in the Puget Sound on Orcas Island. He originally intended to grow apples and hazelnuts, which he did in 1883 on 121 acres of land that he leased for some $10 a year.

But those plans changed; around 1892, he decided to mix things up by buying a handful of flower bulbs for $5. Two years later, Gibbs dug the bulbs up and, to his astonishment, found that they had multiplied. It was the first inkling of what would become the booming bulb business in the Pacific Northwest, and Gibbs was acutely aware of the potential profit.

On that note, Gibbs wrote to Holland with the hope of learning about their technique. To his disappointment though, the Dutch growers were less than willing to swap best practices. But Gibbs was sure that he had struck gold, so he shipped a few bulbs overseas anyway. Sure enough, the Dutch were so amazed by what Gibbs had sent that they immediately set sail for Orcas Island to find out more about the tulips that grew as beautifully as they did in Holland.

Things started off excitingly enough. In 1899, Gibbs moved his work to Bellingham, and with the help of the U.S. Department of Agriculture (USDA), he was able to get 15,000 Dutch bulbs imported to the Pacific Northwest. After years of labor, the Bellingham Tulip Festival opened in 1920.

Much like today’s festival, which includes a series of art shows, concerts, and partnerships with other local events like the Downtown Mount Vernon Street Fair and the Kiwanis Salmon Barbecue, its early years were chock-full of springtime entertainment. From boat races to a 5,000-person parade to the crowing of a Tulip Queen, the Bellingham Tulip Festival joined Seattle and Vancouver to promote a Pacific Northwest celebration.

Unfortunately, the Bellingham Tulip Festival was short-lived. Between the Great Depression and the bulb freezes that occurred in 1925 and 1929, the festival shut down in 1930, and Gibbs moved his bulbs to what would be their forever home, Skagit County.

The following decades weren’t deterred by the demise of the Bellingham Tulip Festival. Bulb growers such as RoozenGaarde and Tulip Town kept growing, and people continued to ring in springtime with the rainbow bright flowers. Finally, in 1984, the Mount Vernon Chamber of Commerce established the Skagit Valley Tulip Festival. And over the past three decades, the three-day festival jumped from five to 17 to the 30-day celebration of today. 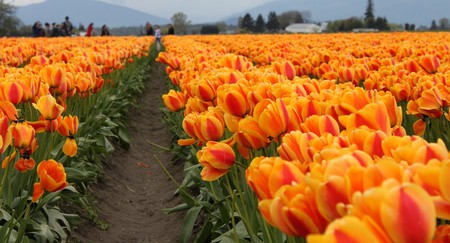