A Brief History of Seattle's Cinerama 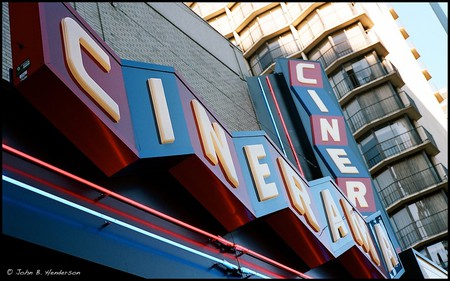 Located in the Belltown neighborhood of Seattle sits one of the world’s most historic theaters: Cinerama. Despite Seattle’s reputation for being the music capital of the U.S. — thanks to bands like Nirvana, Pearl Jam, Fleet Foxes, Death Cab For Cutie, and so on — it also happens to be a bit of a film hub.

Directors like Lynn Shelton (Laggies) and Megan Griffiths (Lucky Them) pioneered Women in Film Seattle, a nonprofit organization offering support and education for women in the industry. Seattle’s film community extends even further with the Seattle International Film Festival. The four-week-long festival — which is the biggest international film festival in the entire country, beating both Los Angeles and New York City — previously featured films like Richard Linklater’s Boyhood, Nick Cassavetes’ The Notebook, and more recently Emily V. Gordon and Kumail Nanjiani’s The Big Sick. And it’s necessary to pay homage to some of the biggest movies and TV series like Sleepless in Seattle, 10 Things I Hate About You, and of course Grey’s Anatomy, which were all filmed in Seattle.

With all this movie buzz around the Pacific Northwest, it’s no surprise that the city holds some of the biggest and best historic theaters around. Cinerama, a name created by the combined effort of cinema and panorama, was built in 1963. Its purpose was to, as its name states, project movies in three-panel Cinerama, a complex process involving an expansive curved screen and three projectors. Only two others exist in the world: Danny Boyle and Steven Spielberg’s favorite theater, Cinerama Dome in Los Angeles, California and Pictureville Cinema in Bradford, England.

Seattle’s Cinerama is capable of much more, too. After three sets of renovations, the theater is fitted for 70mm, 35mm, 3D, and digital formats, which should be exciting for fans of directors like Christopher Nolan and Paul Thomas Anderson, as 70mm is the format both men use when filming. Previous screenings include everything from the 1963 classic It’s a Mad, Mad, Mad, Mad World to the latest J.K. Rowling installment, Fantastic Beasts and Where to Find Them. It may be a one-screen theater, but Cinerama’s calendar carefully curates a mix of old and new in an effort to please moviegoers of all ages.

More film history is accessible inside Cinerama. In its red and blue retro lobby, a rotating display of costumes hang in large glass cases. Provided by the Paul G. Allen Family, original costumes from some of cinema’s biggest films like Star Wars, Blade Runner, and Batman line the back walls. Pair that with a bag of Cinerama’s famous chocolate and butter popcorn and one of the theater’s craft beers, and the moviegoing experience quickly evolves from an everyday outing to cinematic event.